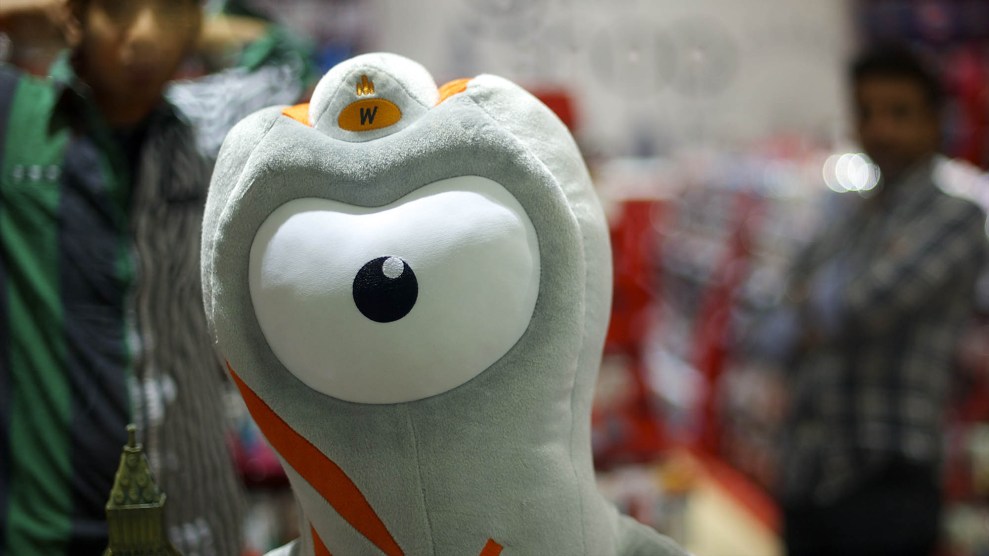 There have been a host of controversies swirling around the 2018 Winter Olympics, ranging from Mike Pence’s non-diplomacy to the aftermath of a widespread Russian doping scandal that kept the country from officially competing. But there is one frequent problem of past games that the South Korea Olympics has managed to avoid: haunting the dreams of children worldwide with ghoulish mascots that belong in a Guillermo Del Toro film rather than being peddled as kid-friendly merchandise.

While you most likely associate the Olympics with the five multi-colored interlocking rings, each of the games since 1968 has featured a unique anthropomorphized mascot as well. And more often than not these fuzzy creatures have been horrific violations of nature.

But not this year—thank god. The Pyeongchang games feature a pair of sensible animal mascots, the sort you could envision a small child actually wanting as a stuffed animal. The primary mascot is known as Soohorang, a jolly-looking white tiger (and look at that cute little nose!).

Soohorang is joined by Bandabi, a black bear who is the mascot for the paraolympics that will take place in Pyeongchang next month. The bear wears a winter beanie! Adorbs. As a pair, they are perfect.

What we see here is an under-noticed, important break from Olympic precedent. Compare Soohorang and Bandabi to Wenlock, the mascot for the 2012 summer games in London.

Per the official description on the Olympic website, which has handily memorialized origin stories for all of the mascots, “The light on his head is based on those found on London’s famous black cabs.” Of course! It continues, “The shape of his forehead is identical to that of the Olympic Stadium roof. His eye is the lens of a camera, filming everything he sees. On his wrists, he wears five bracelets in the colours of the Olympic rings. And the three points on his head represent the three places on the podium for the medal winners.”

In other words, Wenlock is a Frankenstonian creation combining various inanimate building objects into a cyclops that, one must assume, feeds on human brains. The Olympic website also includes the fun fact that during the summer games, “streets, parks and underground station entrances in London were decorated with 84 sculptures of Wenlock and the Paralympic mascot Mandeville standing 2 metres 30 tall and each weighing a ton, to help guide tourists during the Games.” I applaud the bravery of people who followed Wenlock’s directions, instead of fleeing for their lives in the opposite direction. (And with only one eye, Wenlock presumably lacks depth perception, so probably not the best person to task with offering directions?)

It’s really not fair to blame Wenlock, though. Wenlock was just following the traditions created by his forebears, like the first Olympic mascot, which dates back to the 1968 games in Grenoble, France. Named Schuss, a reference to a skiing term, the 1968 mascot was a creature of…well, who the hell knows what this is? Maybe it’s a thermometer? A ball on top of a lightening bolt on a single ski?

That was followed up by a fine, if forgettable, rainbow colored dog as the mascot for the 1972 games in Munich. In 1976, Innsbruck, Austria, went with a shoddily constructed snowball with arms (as if someone tried to build a traditional three-layer snowman but gave up after rolling one ball). From there things were mostly fine—the next decade saw mainly standard sports team-style mascots.

Then, in 1988, things started to go south. Calgary went with an oddball pair of polar bears named Hidy and Howdy, a brother-sister combo, that were just a little too smiley.

In 1994, Lillehammer revived the family idea, but turned it into even more of a horror movie trope by going with children that look like twins, Haakon and Kristin, which marked the first time an Olympic mascot was human. According to the Olympics’ description of the undeniably evil pair, “Although they wear medieval clothes in reference to their historical roots, they are modern children and express the interests and visions of young people.” Yes, totally normal modern-day children who dress in medieval garb. Not creepy at all Norway, not creepy at all.

But the haunting factor ramped up markedly when the games came to Atlanta in 1996. They went with a…thing, initially named “Whatizit” before a poll of children renamed it “Izzy.”

Izzy née Whatizit was first introduced during the ’92 closing ceremony, living up to its initial name during an awkward dance routine.

Izzy is a monstrosity. Its official olympic description offers this horrifying explanation: “A product of information technology Izzy is blue and wears training shoes. The five Olympic rings are in various places around his body…Over time, a mouth appeared where there had first been only lips; stars appeared in his eyes; and his initially skinny legs became more muscled. Finally, a nose grew in the middle of his face.” How the hell does a product of information technology grow a nose? Why does it have muscles? Atlantans had a dystopian take on the future back in the ’90s. And this being the ’90s, Izzy was branded with tie-ins out the wazoo, including pogs and a Sega Genesis game.

After Izzy, the floodgates were open. Following Atlanta, Olympic host countries apparently felt free to share their nightmares with the rest of the world. In 1998, Nagano went with a quartet of misshapen owls. Creepy! In 2000, Australians’ choice of a duck-billed platypus,  kookaburra, and echidna featured a disturbing amount of musculature for a trio of cartoon animals. Creepy! In 2006, Turin managed to take seemingly benign objects, an ice cube and snowball, and somehow made them…creepy!

Even when Olympic hosts somehow manage to avoid making their mascot disturbing, they can still get caught up in controversy. For 2014, Sochi went with passable animal mascots (though unimaginatively, they were just named the Hare, the Polar Bear, and the Leopard).

But this being Russia, there was of course the whiff of an election scandal. “In Russia, accusations of corruption taint even Olympics mascot selection,” read a 2011 Christian Science Monitor headline. As Time explained back then, problems rose from then-Prime Minister Vladimir Putin’s professed support for one mascot in particular. “Vladimir Putin loves (big) cats,” the magazine wrote. “In fact, he loves them so much that he’s accused of rigging a popular vote in order to get a snow leopard on the ballot.” Some attributed the leopard’s late rise in the public voting to Putin putting his thumb on the scale. If only Hillary Clinton had read the Time article about the “cuddly controversy”…