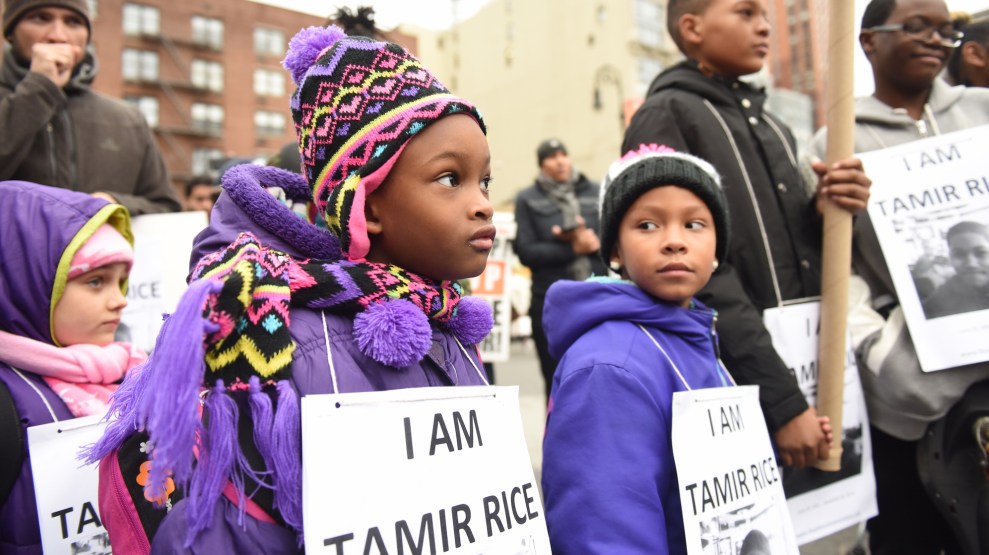 Stop Mass Incarcerations Network sponsored a children's march demanding accountability on the one year anniversary of Tamir Rice's death at the hands of the Cleveland police. Andy Katz/AP

After the mass shooting at Marjory Stoneman Douglas High School in Parkland, Fla., last week, it quickly became clear that it wouldn’t be politicians or veteran activists leading the effort to demand action against gun violence—it would be students.

Calls for action from the Stoneman Douglas students and their peers across the country have received an outpouring of support in the form of national attention and celebrity donations: Just this week, George Clooney, Steven Spielberg, and Oprah Winfrey each pledged to donate $500,000 to the March for Our Lives, a group “created and led” by kids to organize a national protest against gun violence on March 24 in Washington, D.C.

George and Amal, I couldn’t agree with you more. I am joining forces with you and will match your $500,000 donation to ‘March For Our Lives.’ These inspiring young people remind me of the Freedom Riders of the 60s who also said we’ve had ENOUGH and our voices will be heard.

Wednesday night, several Stoneman Douglas students stunned the nation by grilling elected officials and NRA spokesperson Dana Loesch at a town hall. The following morning, Obama praised the young folks in a tweet: “How inspiring to see it again in so many smart, fearless students standing up for their right to be safe; marching and organizing to remake the world as it should be. We’ve been waiting for you.”

But as Roxane Gay, a celebrated American writer, pointed out on Twitter, this is not the first time kids have been doing the hard work of political organizing and protest in the wake of trauma.

It is interesting to note the difference in support for the kids in FL versus the kids in Black Lives Matter. I say that with full admiration for the kids in FL, to survive such a trauma and fight for everyone to be safer. But that’s also what was happening in Ferguson and beyond

Gay is, of course, correct. Throughout history, kids from all backgrounds have been crucial in the fight for social justice.

In 1903, prominent labor organizer Mary Harris “Mother” Jones (who is also the namesake of this magazine) marched from Philadelphia to New York City with 400 “juvenile workers” to protest child labor in textile mills. The Philadelphia Inquirer reported that the “‘children’s army’…made frequent stops to give speeches and to show the public the effects of exploitation, as many of the children marching were permanently maimed, which provided real proof of the dangers of their employment.”

Teenagers and children played a major role throughout the civil rights movement. In 1955, before Rosa Parks refused to give up her seat on a bus in Montgomery, Ala., another young woman by the name of Claudette Colvin did the same thing—except she was 15 years old. After she was arrested and sent to jail, Colvin became one of the four plaintiffs in the Browder v. Gayle Supreme Court case, which ultimately desegregated buses in Alabama.

In 1957, the governor of Arkansas dispatched the state national guard to prevent the students who went down in history as the Little Rock Nine from attending a newly integrated high school. President Eisenhower sent 1,200 soldiers to protect them later that month. In spite of daily threats and violence, the students attended the school for the full year.

Less than a decade after that, thousands of children and teenagers protested segregation by marching across Birmingham, Ala., on May 2, 1963. Hundreds of black children were arrested and crowded into the local jails. The next day, on orders from a city official, police sprayed the children who continued to march with water hoses and hit them with batons. They kept going anyway.

Over 1000 children and teens were arrested in protests on May 2, 1963 in Birmingham. The city ran out of jail space. pic.twitter.com/0GgWsfYseQ

“We didn’t hate white people,” Janice Wesley Kelsey, who was arrested at the protests when she was in 11th grade, recalled to The New Yorker. “We didn’t even know any. We hated the system. That’s what we were protesting about.”

Eight days later, civil rights leaders announced that they had come to an agreement with city officials: Birmingham would desegregate businesses and release the detained protesters.

As Gay noted, children and teenagers have also been heavily involved in the Black Lives Matter movement since its inception. In 2014, for example, after police officer Darren Wilson shot and killed unarmed black teenager Michael Brown, black kids were heavily present in the protests that became a major turning point for the movement.

Parents across the country recognized the historical importance of the moment and wanted their children to bear witness.

“It was important for them to be there,” Kendra Pierson, who brought her sons to an Atlanta vigil to honor Brown, told Huffington Post. “When they look back, in 10 years or five years, I want them to know they were there.” Pierson’s children were six and two years old at the time.

Their activism has continued on through the present.

After Oprah Winfrey tweeted that she would be donating $500,000 to the “March For Our Lives,” Charlene Carruthers, national director of Black Youth Project 100, tweeted her support and made a point similar to Gay’s.

Gosh. This is amazing. And a I’m not being sarcastic. I have to be honest and say that I’m a bit taken aback (and a bit hurt) that those of us who were in the streets in the past five years for Black lives didn’t receive this type of reception or public support. https://t.co/HLYXTcVdfL

I promise y’all. I’m happy for these young people. I just know how so many young people have put their lives on the line over the past five years. We’re rarely compared to Freedom Riders and recipients of such public support. I shouldn’t be bothered, but I am.

In 2016, NFL player Colin Kaepernick began kneeling during the national anthem before football games to protest police brutality and the systemic oppression of people of color in the United States. Soon enough, high school and college students across the country were following his lead.

Before tonight’s Oakland A’s game, the OUSD Honor Band played the national anthem. And because of the heated national debate over racial justice, the students decided to take a knee for the whole song. They said they were protesting racism, police brutality and President Trump for saying what he did about protesting @nfl players who take a knee. See the video on the OUSD Facebook page. #iamOUSD

In January, the Washington Post published an op-ed in support of Kaepernick, penned by a class of fourth graders in New York City:

The majority of Americans support these players. But you know what? Even more younger people than older people do. We believe this is because they are inspiring us by showing us their passion, and fighting for what’s right…The players are standing up — or kneeling down — to bring awareness to the problem of how African-Americans are treated in this country. Some police are not treating black people right — and there’s a long history to this. And it’s still happening now.

Protests Against White Supremacy and the Far-Right

Last spring,  far-right “lightning rod” Milo Yiannopoulos arrived at the invitation of the Berkeley College Republicans to give a talk on campus, chaos erupted. That night of protest set off a series of rallies, organized by far-right extremists and white supremacists. Young people nationwide showed up to counter-protest these rallies, which sometimes turned violent—in Charlottesville, a “Unite the Right” rally left one young woman dead and 19 people injured.

These are literally young UVA students age 17-23 standing up to a sea of white supremacists and neo-Nazis surrounding them #Charlottesville pic.twitter.com/VEU3mU9d3o

In Berkeley, protests continued in August, when a small number of right-wing protesters were overwhelmed by thousands of peaceful counter-protesters. Dozens of families and kids were in attendance.

Lots of families still marching. This is Jules Yildiz. He’s 4 years old; this is his 1st protest & his mom said he rly wanted to come. pic.twitter.com/SAwiDRXyiw

When President Trump announced in September that his administration would be ending Deferred Action for Childhood Arrivals, a policy that protects people who were brought to the United States as children from deportation, thousands of students across the country walked out of school to protest the decision. In Berkeley, students encircled Berkeley High School, holding hands in a human chain while chanting, “No ban, no wall.”

Hundreds of #BerkeleyHigh students form human chain around school in support of DACA classmates. BHS did this in 08 too, against ICE arrests pic.twitter.com/PMYs9I6OZD