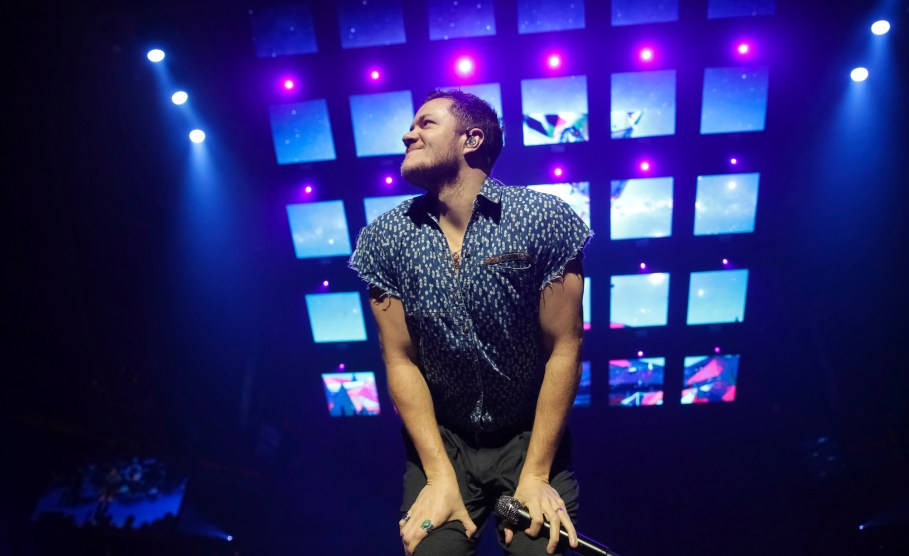 Singer/songwriter Dan Reynolds, of the Imagine Dragons, performs on stage at the Capitol One Arena on Sunday, Nov. 5, 2017, in Washington.Brent N. Clarke/Invision/AP

In Washington, it’s nearly CPAC time—that point in the year when thousands of conservative activists assemble in Washington for the annual Conservative Political Action Conference. At these gatherings, right-wingers gripe about liberals (and the media!) and plot their demise, sometimes in sullenness (when the right’s fortunes are low), sometimes in celebration (when the conservative movement is ascendant). So on Thursday morning, I dropped by the CPAC website to see who and what was on the schedule this year. The die-hardest NRAers and so-called traditional values champions are always prominently featured. As soon as I landed on the page, I was blasted with loud, pulsating rock music. “I’ll do whatever it takes,” the singer was exclaiming, as part of a promotional video for CPAC that flashed images of Donald Trump, Ted Cruz, Sean Hannity, and Dana Loesch addressing previous conferences. Wait a minute. Was that song from alt-rock band Imagine Dragons, who in 2012 produced the mega-hit “Radioactive“? Indeed, it was.

I wondered if the members of the band would appreciate being pressed into service to sell tickets to CPAC.  The band has performed benefits for Amnesty International, the UN Refugee Agency, and LGBTQ organizations—not quite a CPAC-ish line-up. Moreover, the lead singer, Dan Reynolds, who was raised Mormon in Utah, is featured in a new documentary, Believer, which tracks his journey from Mormon missionary to fierce advocate for LGBTQ causes who has challenged the Mormon Church’s stance on gay rights. The film got a standing ovation at the Sundance Film Festival earlier this year. It’s not the sort of fare one would find at CPAC. (By the way, the band’s 2017 monster-hit, “Thunder,” has half-a-billion views on YouTube.)

It seemed unlikely that Reynolds and his bandmates would be delighted to see their anthem-esque song, “Whatever It Takes,” used to make CPAC—and Trump, Hannity, and company—look cool and triumphant.

I sent the band’s publicist an email asking if anyone in the band would care to talk about this. I also did the obvious: I tweeted at the band. (Its Twitter account has almost six million followers.)

I did not hear back right away from the publicist. But soon the band’s Twitter account did reply to my tweet: “Not cool. We are reaching out to get it taken down. Thanks for the heads up.”

As of this writing, the video with the high-octane Imagine Dragon song remains on CPAC’s site. That means that potential attendees can watch Hannity toss a football to a previous CPAC crowd and wonder what it means when a LGBTQ champion sings, “Whip, whip/Run me like a racehorse/Pull me like a ripcord/Break me down and build me up.”

If you want to listen to the song without looking at Trump et. al.: