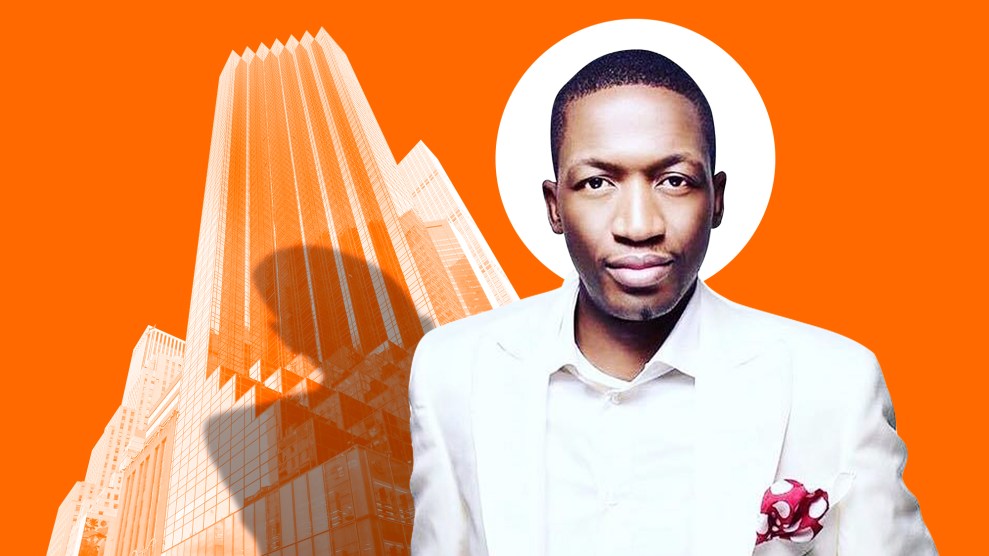 Last Tuesday, an odd duo ascended one of Trump Tower’s golden elevators: a Zimbabwean-born businessman and religious leader who claims to have prophesied Donald Trump’s presidential win and a nationalist pastor from London planning a pro-Trump rally in the U.K.

According to Instagram posts made by the pair, Uebert Angel, a flamboyant evangelical minister and mogul who preaches the prosperity gospel, and Rikki Doolan, his personal assistant, paid a visit to Trump Tower to sit-down with Eric Danziger, the chief executive officer of Trump Hotels, President Donald Trump’s hotel management company.

It’s not clear what Angel and Doolan discussed with Danziger. Prior to the meeting Angel implied he had some serious business: a Tuesday blog post on his personal website, removed after questions from Mother Jones, said Angel “would be making a trip to New York City…to finalise corporate ventures for his company,” specifically mentioning “the grand opening of a hotel in New York City.” Another version of the photo with Danziger was also posted on the Instagram account of the Millionaire Academy, a business venture Angel runs, with the hashtags: “@uebertangel  #Money  #Cash  #motivation#motivationalquotes  #prosperity#uebertangel  #millionaire  #millionairelifestyle#business  #life  #lifestyle  #grind  #mindset#mind  #real  #millionairemindset  #win#winning  #victory  #great  #greatness  #luxury#highlife  #goals”

Shortly before his inauguration, Donald Trump announced a handful of steps, widely criticized by ethics experts, to distance himself from his business empire and diminish conflicts of interest. While Trump retained ownership of his holdings and the right to profit from them, he did pledge that the Trump organization would refrain from any new foreign deals. Angel’s visit to New York raises questions about the company’s willingness, as documented in other recent deals, to continue to explore projects with internationally-based partners despite this restriction.

Angel’s message, personal charisma, and flamboyant clothes and lifestyle have garnered him a large following in Zimbabwe. He treats his hundreds of thousands of social-media followers to updates on his luxurious life—for example, posting photos of a Lamborghini he suggested he purchased for his wife. Angel, who is a British citizen, has a complicated relationship with his native country’s former longtime dictator, Robert Mugabe. Angel prefers to focus on prosperity over politics when preaching, but in 2015, at Mugabe’s 90th birthday celebration, he sat next to the African strongman, taking the stage to announce he was part of Mugabe’s political movement and appearing to endorse Mugabe’s policy of seizing farms from white farmers and political opponents.

Angel’s visit to New York raises questions about the company’s willingness to continue to explore projects with internationally-based partners.

“There is no more land being created and there is an opportunity here that the government under this president has provided to the people,” Angel was quoted as saying. “As youths, let’s be vigilant and let’s take that advantage and take what belongs to us.”

More recently, Angel has been critical of Mugabe, and lodged a complaint that his remarks from the rally had been misquoted. Earlier this month, Angel’s personal website relayed a claim that the government of Zimbabwe had once targeted Angel for persecution.

Besides his ministries, Angel also claims to run a series of successful businesses, with names like The Billion Group and Black Stallion. The website for The Angel Organisation, his umbrella company, lists interests in luxury resorts and a chain of hotels, though details are sparse.

The meeting is not the first link between Angel, his personal assistant Doolan, and President Trump. While preaching in February 2016, Angel, who describes himself as a prophet, told his audience that “God wants a Trump.” He later boasted that God had spoken to him, foretelling Trump’s victory. Doolan has attracted attention after Vice identified him as an organizer of “I Am British,” a nationalist campaign to rally supportive crowds in the event Trump ever visits the United Kingdom. Doolan declined a request for comment, but here he is captured in a YouTube video boosting a prospective “March for Trump!”

The Trump Organization did not respond to questions about meeting’s content or the relationship between Uebert, Doolan, and the president’s company, or why they were meeting with its CEO. Somebody from one of Angel’s companies provided a brief unsigned email in response to Mother Jones’ inquiries denying any “cooperation” or “partnership.”

“There is really no story to write because there was no such discussions about Uebert Angel Hotel or any cooperation with Trump and if we have we will tell you,” the email read. “The team there was very hospitable and there was nothing to do with any partnership … it’s allowed to visit the Trump Tower so going there should in no way be seen as a deal between the Trumps and the Angels.”

“There is really no story to write…it’s allowed to visit the Trump Tower.”

Danziger took over as CEO of Trump Hotels in 2015, just two months after Trump announced his presidential run. Trump’s declaration shortly before his inauguration that, while he would still own his business empire, he would not have day-to-day control and would not invest in any new foreign deals, complicated Danziger’s job. By his account, the company had to cancel 47 international deals.

The company has been working on developing two new lines of hotels in the United States—Scion, an upscale chain less luxurious than Trump-branded properties, and American Idea hotels, which would compete with chains like Holiday Inn and Fairmont Inn. Shortly after Trump’s election, a Turkish businessman said he would be building the first Scion, using foreign cash. The deal was eventually squashed—in part over the partner’s foreign ties, the Trump Organization claimed—but the New York Times reported that it was Eric and Donald Trump Jr. who had pursued the partnership.