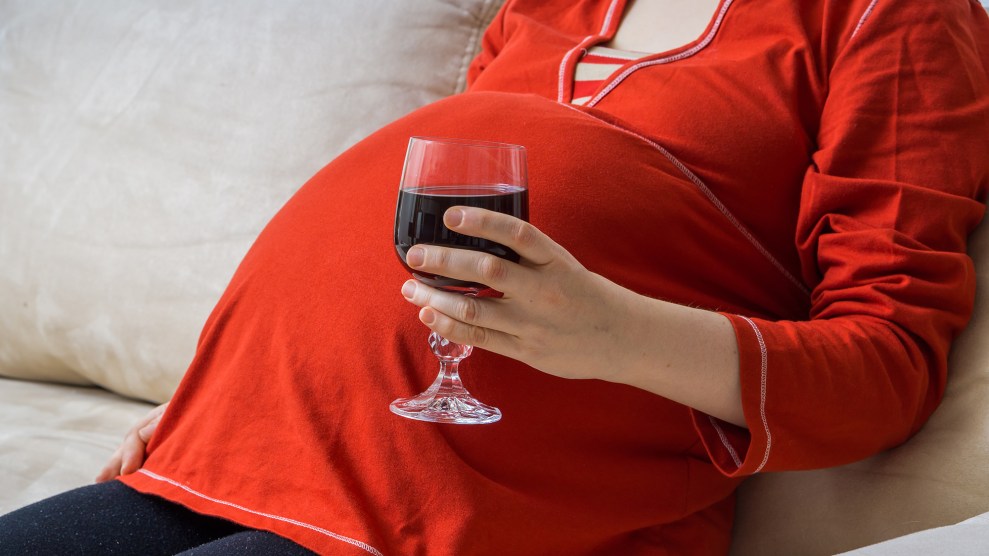 Neurological problems caused by drinking alcohol during pregnancy might be much more common than previously thought. A new study suggests that as many as 1 in 10 American children may suffer from these disabilities—a rate far greater than that of autism, which affects 1.5 percent of children.

“Messages around drinking during pregnancy can quickly become political, “and sometimes we can lose sight of the actual science,” said one researcher.

The study, published earlier this week in the Journal of the American Medical Association, evaluated 3,000 first graders in four racially and socioeconomically diverse communities for symptoms associated with fetal alcohol spectrum disorder. Researchers also asked the children’s mothers to fill out questionnaires about their drinking habits during pregnancy.

“These problems are severe,” says Philip A. May, a professor in the University of North Carolina’s school of public health and a lead author on the study, “but they are also 100 percent preventable by not drinking while you’re pregnant.” May points out that researchers have known this since the 1970s—and yet, the number of women who report drinking alcohol during pregnancy hasn’t fallen. Actually, it’s rising.

Why? No one knows exactly. But part of the problem might be confusion around other risks during pregnancy, says Christina Chambers, another lead author and professor of pediatrics at the University of California-San Diego’s medical school. “Can you drink coffee? Can you eat sushi? There is conflicting advice coming from every direction.”

And then there’s what researchers call confirmation bias: “We’ve all heard the stories of someone’s friend who drank through pregnancy and her kid turned out fine,” May says.

Yet another problem: Messages around drinking during pregnancy can quickly become political, “and sometimes we can lose sight of the actual science,” Chambers says.

In 2016, when the Centers for Disease Control and Prevention warned women not to drink if they were pregnant or considering becoming pregnant, a vicious backlash ensued. “It’s the kind of swath-yourself-in-bubble-wrap thinking that has turned modern pregnancy into a nine-month slog of joyless paranoia,” Ruth Graham wrote at Slate.

Chambers interpreted the CDC’s message differently. While it might have been phrased better, she says, “I don’t see it as anti-feminist. If you want to make this a feminist issue, it’s that we have this information, so we’re taking control of this situation, and this is what we’re going to do.”

Janet Williams, a professor of pediatrics at University of Texas Health-San Antonio’s medical school, agrees with that assessment. In 2015, Williams worked with the American Academy of Pediatrics on a report that resulted in the group’s official warning about the risks of drinking during pregnancy. “I took a lot of grief when I published that report,” she says.

“Alcohol’s damaging effect on a developing fetus can depend on many variables—genetic makeup, nutrition, metabolism, etc.”

Much of the written backlash to these warnings notes that there isn’t a lot of data on drinking in pregnancy—writers identify this lack of evidence as a flaw in the argument that drinking while pregnant could be dangerous. Indeed, last year, when researchers analyzed the literature on light drinking during pregnancy, they found that few researchers had studied that practice. Their paper, published in the British Medical Journal, spurred a new round of articles questioning the wisdom of counseling pregnant women not to drink at all. “Light drinking during pregnancy does not harm baby,” the New York Post concluded.

But while those researchers didn’t find a lot of data showing definitively that light drinking caused harm, they also didn’t find evidence that proved it was safe. That’s probably not going to change, says May. One reason is that alcohol’s damaging effect on a developing fetus can depend on many variables—genetic makeup, nutrition, metabolism, etc. Research (PDF) has shown that the children of older women and of women who have given birth before are at an increased risk for fetal alcohol spectrum disorder. “We have seen people who were exposed to tremendous amounts of alcohol throughout the pregnancy, and they test completely normal,” May says. “And then we see cases where the exposure has been very minimal and that child is severely damaged.”

Further complicating matters is the fact that it’s incredibly hard to assess any kind of risky consumption during pregnancy. To get definitive results, you’d have to study a group of pregnant women that were being given doses of the substance in question, and that, of course, would be unethical. So researchers must rely on self-reported data and observation.

The new study isn’t perfect either. About 40 percent of parents in the schools where the researchers gathered their data didn’t let their children participate, and a third of the participating mothers didn’t answer questions about drinking during pregnancy. What’s more, the places the researchers studied didn’t include any densely populated urban area, which means the results might not reflect all of the communities in the United States.

UT Health’s Williams, who wasn’t associated with the study, nevertheless praised it as “some of the most accurate and precise research that has come out so far on fetal alcohol spectrum disorders.”

“We’re not telling you what to do,” she says. “We’re telling you what we know with these increasingly precise scientific studies so that you can make the best choice for yourself and your child.”