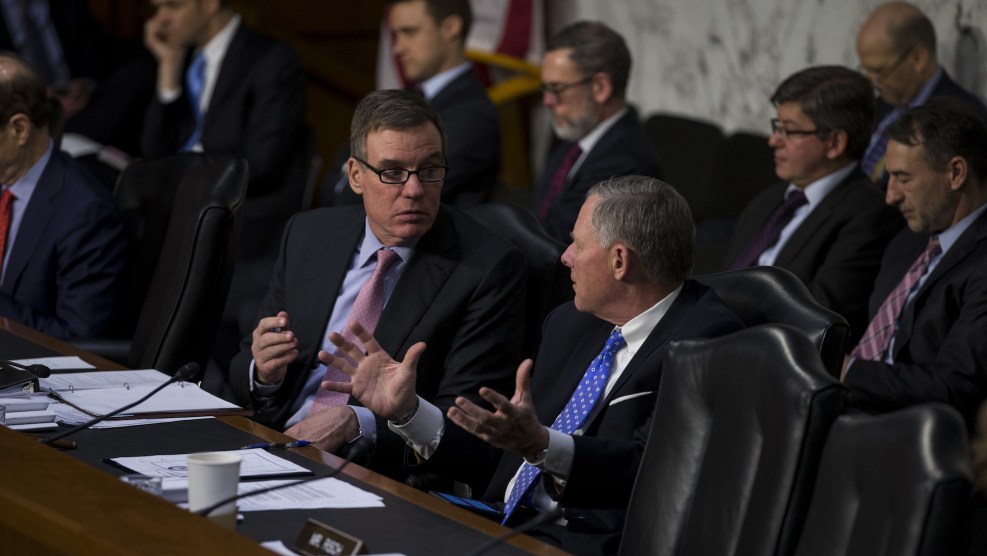 On Thursday night, a few hours before the government briefly shut down, President Donald Trump turned his attention to Sen. Mark Warner, a Virginia Democrat at the head of the Senate Intelligence Committee’s investigation into Trump’s ties to Russia.

Trump tweeted about a Fox News story reporting that last year Warner had exchanged text messages with a lobbyist for a Russian oligarch in a bid to make contact with Christopher Steele, the former British intelligence officer who authored the famous memos detailing alleged Russian efforts to compromise Trump.

Wow! -Senator Mark Warner got caught having extensive contact with a lobbyist for a Russian oligarch. Warner did not want a “paper trail” on a “private” meeting (in London) he requested with Steele of fraudulent Dossier fame. All tied into Crooked Hillary.

Trump wasn’t the only one promoting the story to undercut the Senate’s Russia probe. So too were a horde of Twitter accounts linked to Russian influence efforts. According to the Alliance for Securing Democracy’s Hamilton 68 Dashboard, which tracks such activity, automated accounts, or bots, that amplify Russian messaging efforts, as well as the accounts of real pro-Russian users, began tweeting about “Warner” and “Mark Warner” on Thursday night. On Friday afternoon, the words remained by far the most popular trending topic among the 600 accounts the group keeps an eye on.

Russian bots and trolls monitored by the organization regularly push news stories that cast doubt on investigations into the Trump campaign’s suspected coordination with Russia or advance counter-narratives that appear aimed at distracting from the scandal. But Thursday night marked a particularly clear example of the president and Russian messengers aligning in their attempts to undermine the Trump-Russia investigation.

Trump’s decision to reference Deripaska, albeit without using his name, was somewhat curious. Earlier Thursday, Alexei Navalny, a Russian opposition activist, alleged that Deripaska may have provided the Kremlin with information about the Trump campaign that he obtained from Manafort, a former business associate of Deripaska who appears to have owed the oligarch millions of dollars. In July 2016, while he worked for the Trump campaign, Manafort offered to provide Deripaska with “private briefings” about the campaign. Navalny’s wild story is based partly on videos, social media posts, and the memoir of a Russian escort who appears to have traveled with Deripaska on a yacht while he met clandestinely with a top Russian foreign policy official. Navlny argues the official could have served as a conduit through which Deripaska passed information from Manafort to the Kremlin. (A Deripaska spokesman told the Associated Press that Navalny’s “scandalous and mendacious assumptions are driven by sensationalism and we totally refute these outrageous false allegations in the strongest possible way.”)

The texts between Waldman and Warner suggest that Steele had a connection to Waldman. The former MI6 officer reached out to Waldman, asking him to contact Warner on his behalf in response to intelligence committee efforts to interview him, according to the texts. (Warner and Waldman were also in touch about the prospect of Deripaska testifying before the committee. But Deripaska offered to do so only if he was given full immunity from any potential criminal charges, a deal American officials rejected.) Warner’s outreach was an apparently informal bid to reach Steele. Republicans on the panel defended Warner, saying they knew of the contact with Waldman.

“Sen. Warner fully disclosed this to the committee four months ago,” Sen. Marco Rubio (R-Fla.), a member of the panel, tweeted Thursday. “Has had zero impact on our work.”

An aide to Sen. Richard Burr (R-N.C.), the committee’s chairman, told Fox News that the senator knew Warner was trying to reach Steele through a “back channel” and was not concerned by the effort. Burr in fact told reporters during an October news conference that he and Warner had each personally attempted to reach out to Steele.

“From the beginning of our investigation, we have taken each step in a bipartisan way, and we intend to continue to do so,” Burr and Warner said in a joint statement Thursday night.

For reasons that remain unclear, Waldman provided his texts with Warner to the committee in September. A “Republican source” shared them with Fox New, according to the report.

The Fox News report revealing Warner’s texts comes days after WikiLeaks founder Julian Assange direct-messaged a Twitter account he believed belonged to Sean Hannity to offer “some news” about Warner. Assange was actually messaging a spoof Hannity account. Assange’s errant DM raised questions about whether he had played a role in supplying the texts to Fox. The author of the story, Ed Henry, told the Daily Beast he had not communicated with WikiLeaks or Hannity about the Warner story.