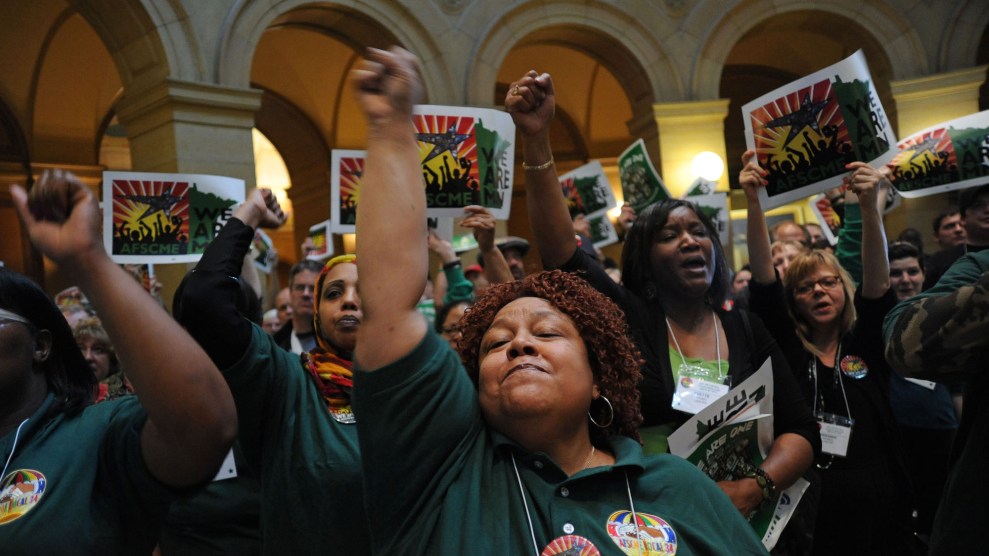 AFSCME members protest at the Minnesota State Capitol against a "right to work" amendment in 2012.Richard Sennott/Minneapolis Star Tribune

On Monday, the Supreme Court heard oral arguments in Janus v. AFSCME, a case that could kneecap public-sector union funding if the court rules in the plaintiff’s favor. Union opponents have celebrated the case for targeting the financial heart of the labor movement. Beyond the lively legal arguments, some labor supporters have noted that an unfavorable decision for unions would disproportionately affect women and people of color.

The legal team for Mark Janus, an Illinois state employee who is represented by the American Federation of State, County and Municipal Employees, is arguing that the required fee he pays to the union for bargaining on his behalf violates his First Amendment rights. If the Supreme Court rules in Janus’s favor, it will undo the precedent in the 1977 case Abood v. Detroit Board of Education, in which the court ruled unanimously that public employees who disagree with the union representing them are not denied their right to free speech.

During Monday’s arguments, the court’s liberal justices raised flags about how reversing a 40-year-old precedent would affect the livelihoods of millions of workers. Justice Sonia Sotomayor observed that the arguments against union fees were essentially no different from ones to “do away with unions.” And Justice Elana Kagan cautioned, “This is a case in which there are tens of thousands of contracts with these provisions. Those contracts affect millions of employees, maybe as high as 10 million employees.” About five million workers in 24 states are currently covered by the “fair-share” fees at the heart of the case.

If the court’s conservative justices rule against the union, it will hurt some workers more than others. In an amicus brief, the National Women’s Law Center and dozens of other groups “committed to civil rights and economic opportunity” argue that unions have been a vital tool for shrinking economic inequality for women and people and color: “Unions are associated with smaller wage gaps related to gender and race in part because they promote transparency in criteria and decisions on compensation, recruitment, and promotions. Gender-based wage gaps persist throughout the economy, but the wage gap for union members is 53 percent smaller than the wage gap among non-union workers.” The brief goes on to argue that union benefits like pensions, health insurance, and paid leave are especially important for women and people of color, who face greater vulnerability in the labor market.

The Economic Policy Institute, a liberal think tank, says that unionized black women would suffer the most from an anti-union decision in Janus. Black women make up a disproportionate share of public employees (18 percent, or roughly 1.5 million workers). Despite their ugly histories of racist exclusion, unions have emerged as a key vehicle for collapsing the vast inequality between black women and the rest of the workforce. According to the NWLC, black women who belong to unions make 30 percent more than those who don’t. And while black women earn 65 cents for every dollar earned by white men, that wage gap is 20 percent smaller for unionized black women.

Justice Kagan acknowledged the significant real-world impact of this case, which could be decided this summer. Ruling against the union, she cautioned, would not only challenge laws across several states, but would affect “the livelihoods of millions of individuals…all at once. When have we ever done something like that?”