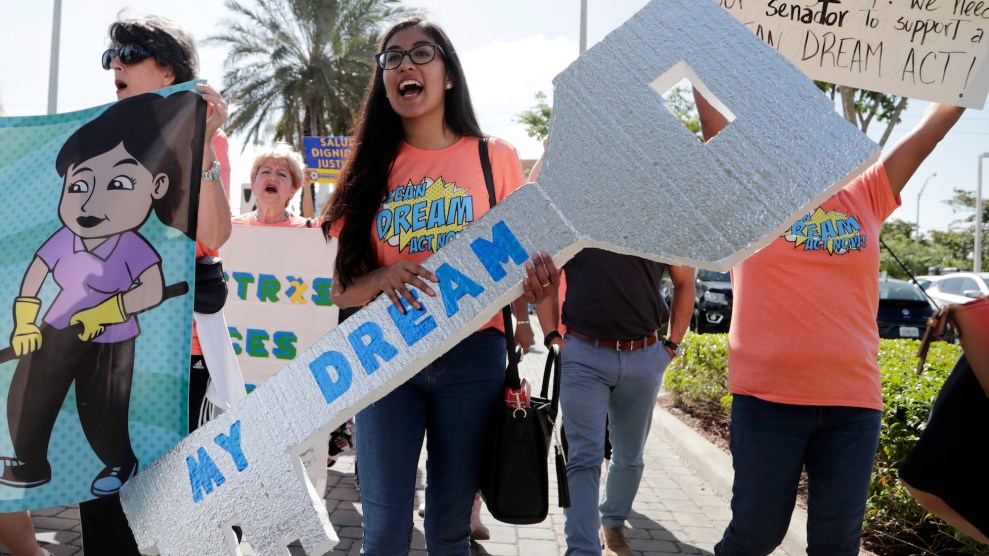 A second federal judge has temporarily blocked the Trump administration from ending protections for Dreamers—undocumented immigrants who came to the United States as children. The ruling requires the Department of Homeland Security to continue accepting renewal applications for Dreamers protected by the Obama-era Deferred Action for Child Arrivals (DACA) program, which President Donald Trump moved to end last year.

Tuesday’s ruling from New York district court judge Nicholas Garaufis follows a similar preliminary injunction issued last month by California judge William Alsup. As Mother Jones has written, the Trump administration has taken the rare step of appealing Alsup’s decision straight to the Supreme Court. But it has not sought not to immediately stop, or “stay,” the injunction. As a result, DACA renewals are likely to remain open for months, and possibly through the November midterm elections.

Garaufis did not dispute that the Trump administration has the authority to end DACA. Instead, his decision holds that the administration likely violated a federal statute known as the Administrative Procedure Act by winding down DACA in an “arbitrary and capricious” manner. He concluded that a temporary injunction is necessary because ending DACA would likely cause “irreparable harm” to DACA recipients:

If the decision is allowed to go into effect prior to a full adjudication on the merits, there is no way the court can “unscramble the egg” and undo the damage caused by what, on the record before it, appears to have been a patently arbitrary and capricious decision.

The Trump administration argued that the California injunction means that DACA recipients are not facing imminent harm. Garaufis rejected that argument, noting that the administration is “vigorously contesting” the ruling before the Supreme Court.

The Senate is currently debating immigration proposals that would provide Dreamers with a path to citizenship, instead of the temporary protections granted by DACA. So far, they appear to have made little progress.

On Monday, Majority Leader Mitch McConnell (R-Ky.) announced he is supporting a hardline immigration bill that is modeled on Trump’s immigration framework. The plan would provide some Dreamers with a path to citizenship in exchange for deep cuts to legal immigration, border wall funding, and a long list of additional conservative immigration priorities. Immigrant advocates and Democrats consider the proposal a nonstarter.

Correction: An earlier version of this article misstated the day on which Alsup issued his ruling.