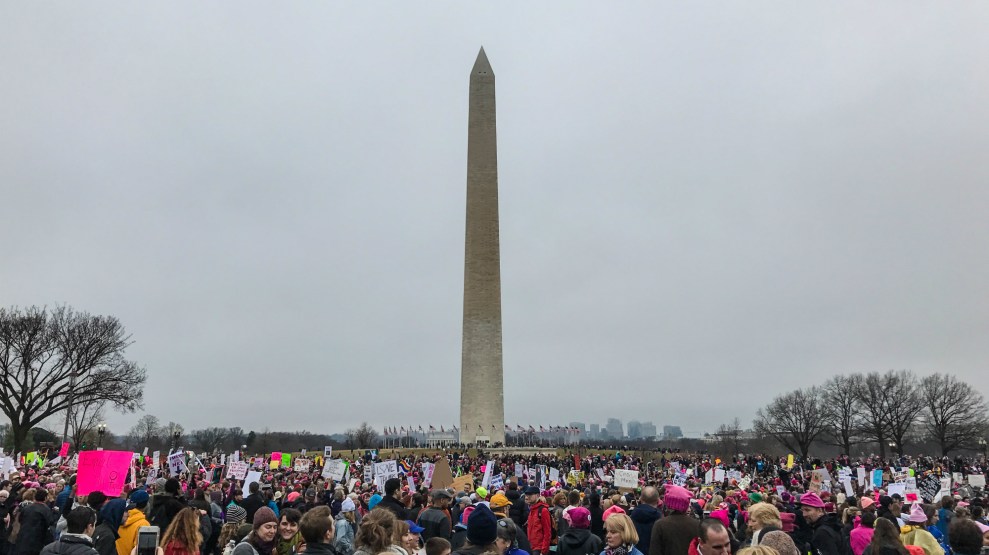 A year ago, on the day after President Donald Trump’s inauguration, millions of people flooded the streets in protest. The Women’s March, which took place in dozens of cities and towns across the country, is believed to have been the largest single-day demonstration in US history. Many of those who carried signs and wore iconic (and controversial) pussy hats that day pledged to spend the next four years fighting against Trump and getting more involved in politics. And to a remarkable degree, the momentum that was so visible in the marches hasn’t disappeared, as massive numbers of women lobby Congress, donate to candidates, and run for office. Here are some of the eye-popping numbers:

The number of people who attended last year’s Women’s March, according to the Washington Post.

The number of women likely to run for Congress or statewide office in 2018, according to Center for American Women and Politics at Rutgers University.

Of those 602, 480 are not incumbents. At this point in the 2014 election cycle, there were only 321 women candidates likely to run for Congress and statewide offices, according to CAWP. Kelly Dittmar, a scholar with the group, says she expects to see more women running for seats in state legislatures, as well, but that data hasn’t been collected yet. CAWP also plans to gather data on women of color running at various levels of government.

While the increase bodes well for getting more women elected to office, Jennifer Lawless, who heads the Women & Politics Institute at American University, cautions that because most of the women stepping up to run are Democrats, “women’s electoral fortunes and representation are linked to the vagaries of the political environment in the way that men’s are not.” In other words, if Republicans do much better in a later election cycle, women will take a disproportionate hit.

The number of women who contributed at least $200 to federal political campaigns in the first half of 2017, according to a Center for Responsive Politics analysis.

During the first six months of 2013, just 56,278 women contributed to campaigns, compared to 148,412 men. Both numbers increased dramatically in the first half of 2017 (the most recent period for which data is available), but donations from women have increased at a much faster rate. The number of men contributing has tripled to 476,406. The number of women donors, meanwhile, is nearly eight times higher than it was in 2013—and is now nearly equal to the number of men who donate. (Keep in mind that the actual number of donors, both men and women, is certainly higher; data is only tracked for people who give at least $200.)

The increase in women donors has been a huge boon for Democrats. According to CRP, women have given more than $90 million to Democratic and liberal candidates and groups this cycle—a massive increase from about $40 million in the first half of 2013. By contrast, women have given Republicans and conservatives just $48 million in the current cycle, an increase from $31 million in 2013. That said, the donations from men still tend to be larger: Men’s contributions total more than $404 million in the current cycle, compared to about $171 million from women.

The number of elected officials who in the past year announced they are resigning, retiring, or not seeking re-election amid allegations of sexual misconduct.

The #MeToo movement has reverberated through the House, the Senate, and state governments around the country, leading former Sen. Al Franken (D-Minn.), former Rep. Trent Franks (R-Ariz.), and many others to step aside. Misconduct allegations even led to the downfall of a prominent jurist; in December, 9th Circuit Court of Appeals Judge Alex Kozinski left the bench.

Trump, who’s been accused of sexual misconduct by 20 different women, remains President of the United States.

The number of women who have reached out to EMILY’s List about running since November 2016.

That’s more than a 26-fold increase over the previous record, according to the political action committee that supports pro-choice Democratic women. In the 2016 election cycle, the group had heard from what at the time seemed like an astounding 920 potential candidates, a number that spokeswoman Alexandra De Luca attributes to the “Hillary bump.” In just the two weeks after the November 2017 elections in Virginia and New Jersey, 1,000 women reached out about running, according to De Luca. Other groups encouraging women to run are also seeing spikes in interest. In earlier years, the non-profit She Should Run saw about 150 people per month express an interest in running. But since Trump’s victory, the group says, roughly 16,000 women have stepped forward to say they are considering launching a campaign someday.

The number of women who attended EMILY’s list candidate trainings in 2017.

That’s the highest number of women the group has ever trained, according De Luca, who adds that the women participating have been more racially diverse and younger than in previous years. Other groups have seen a similar trend. CAWP runs a national program to encourage women to seek public office that usually has between 150 and 200 attendees. In 2017, that number jumped to 270.

The number of women in Virginia’s House of Delegates after the 2017 elections.

That’s the most women ever to serve in Virginia’s lower house, according to CAWP—though men still make up nearly three-quarters of the body. Twenty-three of the 28 women are Democrats. Twelve were newly elected to the House in 2017. Voters also elected the first openly lesbian, Latina, and Asian American women to serve in the House of Delegates. Also notably, Danica Roem became the first openly transgender person to be elected and seated as a state lawmaker anywhere in the country—ousting a 26-year incumbent who called himself Virginia’s “chief homophobe” and had authored both the state’s ban same-sex marriage and an unsuccessful anti-trans “bathroom bill.”

The percentage of women who voted for Democrat Doug Jones over Republican Roy Moore in Alabama’s 2017 Senate race, according to exit polls.

Despite allegations that he sexually assaulted teenagers, Moore managed to win the votes of 56 percent of men. Women handed Jones an even larger majority, narrowly keeping Moore out of the US Senate. Moore actually won by 29 percentage points among white women, but he lost by 96 points among black women. In Virginia, 61 percent of women supported Democrat Ralph Northam’s successful 2017 campaign for governor. Just 48 percent of men backed Northam. Like Jones, Northam actually lost among white women but won overwhelmingly among black women.

Interestingly, no such gender gap occurred in New Jersey, where Democrat Phil Murphy defeated Republican Kim Guadagno, a pro-choice woman, in the race to replace Chris Christie (R) as governor.

Russ Choma contributed to this report.