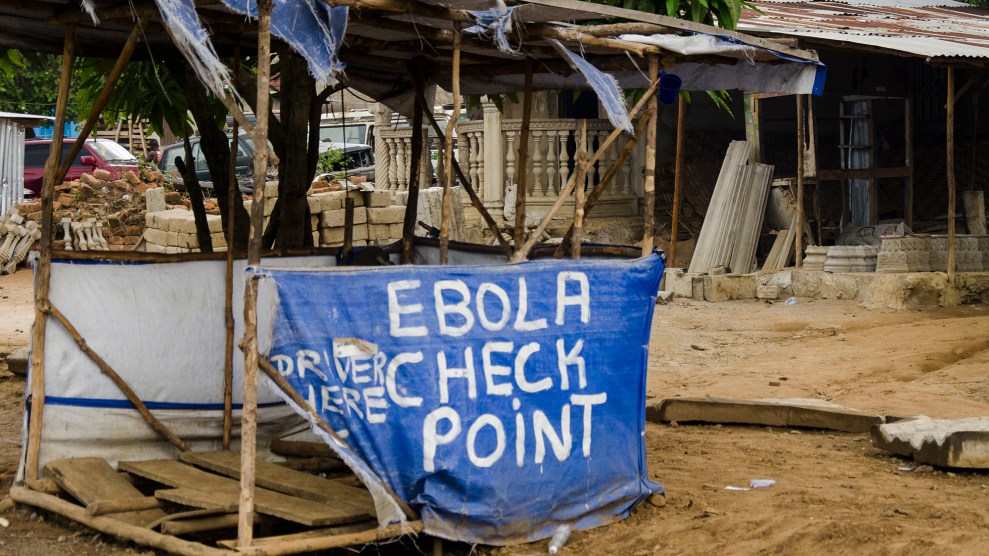 All over the world, public health experts are trying to prevent the next pandemic—but their work is now in jeopardy, the Wall Street Journal reported last week. The Centers for Disease Control and Prevention has warned health officials worldwide that without an influx of new funds, its Global Health Security Agenda may have to cut back operations from 49 countries to just 10 in 2019. “Faced with this anticipated fiscal reality, we have had to make some very difficult decisions,” Rebecca Martin, director of the CDC’s Center for Global Health, wrote in an email.

“As we saw with Ebola, diseases can now move very quickly around the world with air travel,” warns one public health expert.

The “fiscal reality” she mentions is the coming expiration, in October 2019, of a five-year, $582 million federal grant awarded in 2015, largely to support the American government’s work on the Ebola crisis. The public health experts I talked to said the money helped aid workers in rural areas establish programs to detect and respond to new outbreaks of Ebola and other diseases. When the funds stop flowing, these programs may well be toast—a dangerous setback not just for their home countries, but for the rest of the world, too. “As we saw with Ebola, diseases can now move very quickly around the world with air travel,” says Linda Venczel, director of the Global Health Security Partnership at the public health nonprofit PATH. “The key to stopping pandemics is preventing them before they begin.”

Over the last few years, Venczel has worked on a team that partnered with the CDC to set up a new outbreak monitoring hub in the Democratic Republic of the Congo, a country considered highly vulnerable to outbreaks. In undeveloped, largely rural countries like the DRC, she told me, it takes a long time for public health officials in the cities to hear about outbreaks in remote villages. When they do find out, it can then take a long time to figure out how to reach those places with medical supplies.

The new hub in Kinshasa, the DRC’s capital, allows health workers to monitor trends such as school attendance and pharmacy sales—both indicators of illness. The facility also is equipped to use satellite imagery to figure out the most efficient ways for aid workers to get into affected areas and to perform preventative tasks such as administering medicines and vaccines. But if funding dries up, Venczel says, her team won’t be able to train workers to use the hub effectively: “Now that we have the physical space, it would be really frustrating if we couldn’t have the training.”

Her colleague Carolyn Reynolds, PATH’s vice president of policy and advocacy, notes that once a country has a robust public health system in place, that infrastructure can pay off in the event of an outbreak. During the Ebola epidemic, Nigeria stopped the disease from spreading by activating systems it had developed to eradicate polio in rural areas. “If it had gone widespread in Nigeria, we would have been dealing with a whole different ball game,” Reynolds says.

Widespread outbreaks aren’t merely deadly; they are exceedingly expensive. In a report (PDF) last year, PATH calculated that the Ebola outbreak cost American taxpayers $5.4 billion; our government’s recent Zika response cost $1.1 billion. The costs would have been astronomically higher had there had been a sizeable outbreak of either disease in the United States.

“It’s wonderful what we’ve been able to create, but it could very quickly unravel.”

In addition to the long-term costs, scaling back programs to monitor infectious diseases worldwide has political ramifications, notes Daniel Levitt, a senior technical advisor for HIV/AIDS with the public health organization CARE. “The US government might lose some of its leveraging power because we were building relationships with agencies and governments in those countries,” he says.

Indeed, according to the Wall Street Journal, the CDC has picked the 10 countries it will continue to support through the Global Health Security Agenda—India, Thailand, Vietnam, Kenya, Uganda, Liberia, Nigeria, Senegal, Jordan and Guatemala—on the basis of “strategic or regional importance.” The federal government, however, has acknowledged the importance of working with all vulnerable nations. In October 2017, Secretary of State Rex Tillerson called the Global Health Security Agenda “one of the most vital initiatives for building global capacity to prevent, detect, and respond to infectious disease threats.” Yet the administration hasn’t set aside money to sustain the program after the grant expires next year. And President Trump’s budget proposals have included heavy cuts to global infectious disease programs.

In an email, CDC spokeswoman Kathy Harben notes that “the CDC, along with its partners throughout the Federal government, strongly supports the Global Health Security Agenda to prevent, detect, and respond to infectious disease threats.” She added, “We support the extension of GHSA through 2024 and are currently participating in a deliberative policy process to determine our commitments moving forward.”

If the cuts do go through, says Dr. William Karesh, executive vice president for health and policy at the public health nonprofit EcoHealth Alliance, aid groups like his will have to figure out how to make do: “This is not a particularly new event—in the past other agencies were able to come through.” PATH’s Venczel wasn’t quite so optimistic about the fate of the Kinshasa medical hub. “It’s wonderful what we’ve been able to create,” she told me. “But it could very quickly unravel if we’re not willing to put the resources into keeping it going.”