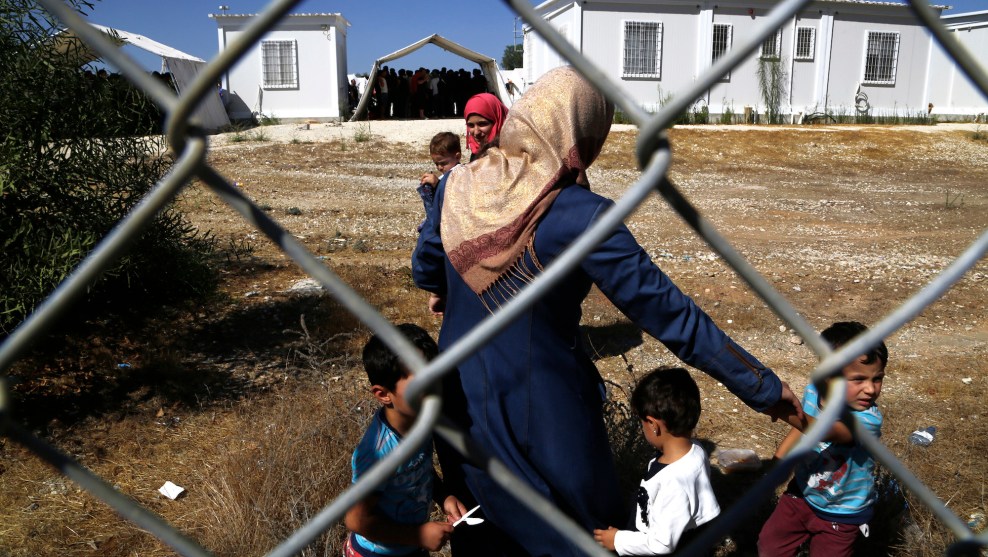 Women from Syria walk with their children in a refugee camp in Cyprus in September.Petros Karadjias/AP

The United Nations estimates that there are 5.5 million Syrian refugees. In the past three months, the United States has allowed two of them to enter the country—down from about 3,600 in the last three months of the Obama administration.

After kicking off his presidency by temporarily banning refugees, Donald Trump lifted the ban in late October. But at the same time, he increased scrutiny of refugees from 11 countries, requiring that they be admitted only if doing so fulfills “critical foreign policy interests.” Refugee advocates said that the language would effectively ban refugees from a group of mostly Muslim-majority nations. Data from the State Department’s Refugee Processing Center reviewed by Mother Jones confirms their prediction.

The United States has taken in 44 refugees from the targeted countries since Trump issued his executive order, compared to about 12,000 during the same period last year. The countries are Egypt, Iran, Iraq, Libya, Mali, North Korea, Somalia, South Sudan, Sudan, Syria, and Yemen.

The heightened vetting of people from those countries has driven down the total number of Muslim refugees coming to the United States. About 550 Muslim refugees have been admitted to the United States since the executive order. More than 11,000 arrived during the same period last year. The share of admitted refugees who are Muslim has dropped from 48 percent at the end of the Obama administration to 11 percent in recent months.

Under Trump’s October executive order, the Department of Homeland Security (DHS) would conduct a 90-day “in-depth threat assessment of each [targeted] country.” During that period, DHS said in a memo to Trump, it would only take refugees from the 11 countries “whose admission is deemed to be in the national interest and poses no threat to the security or welfare of the United States.”

The 90-day mark passed last week. But Sean Piazza, a spokesman for the International Rescue Committee (IRC), a refugee resettlement agency, says the organization has not received any updates about the status of the temporary review now that the 90-day period has passed. It is unclear if it is still in effect, and DHS did not respond to a request for comment. DHS’ October memo stated that refugee admissions from the targeted countries are likely to “occur at a slower pace” beyond the 90-day deadline.

The Trump administration has tried to undermine support for accepting refugees by casting them as an economic burden. In September, the New York Times reported that White House officials had killed a draft report from the Department of Health and Human Services that found that refugees have increased government revenue by $63 billion over the past decade. The report that was ultimately published had a different calculus, documenting how much it costs to provide services to refugees but not how much they pay in taxes.

Overall, the United States in on track to resettle about 21,000 refugees this year, according to the IRC. That would be fewer than in any year since at least 1980—including 2002, when refugee admissions plummeted in the wake of 9/11. It is also less than half of the annual 45,000-refugee cap that the Trump administration set in September, which was the lowest cap ever. Historically, the United States has been considered a world leader in resettling refugees.

Before Trump assumed the presidency, it already took up to two years for refugees to be vetted and resettled, not including the time people spent fleeing their country for refugee camps. Henrike Dessaules, the communications director at the International Refugee Assistance Project, says the group has had clients who “were ready to travel, that had their medical checks, security checks, and interviews done.” Instead, “they have been completely stalled in the process,” she says.*

In 2016, the Obama administration placed its refugee limit at 85,000 people and used all but five of those slots. This year’s drop comes even though there were about 22.5 million refugees across the world in 2016, more than at any time since the United Nations’ refugee agency was founded in 1950.