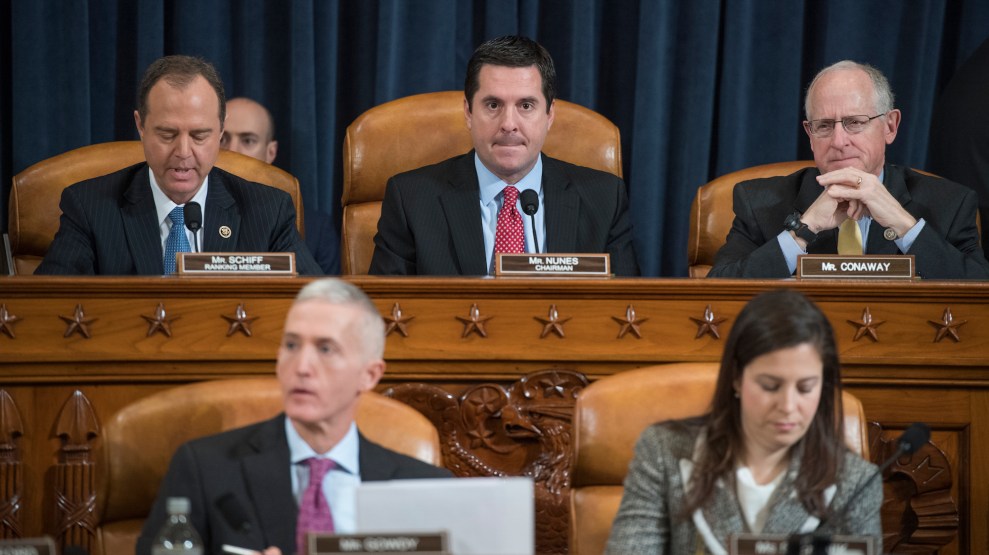 With the new year, Republicans are eager to shut down probes of what President Trump has called “this Russia thing.” They are pressing to rapidly complete congressional inquiries into the Trump campaign’s interactions with Russia while working to undermine special counsel Robert Mueller’s ongoing investigation.

For months, Republicans have pursued a strategy that boils down to: obstruct, divert, and undercut. They have stymied Democratic efforts to probe various Russia threads, mounted diversionary inquiries related to Hillary Clinton, and sought to kneecap the special counsel investigation by launching an attack on the credibility of the Justice Department itself. On Friday, two Republican Senators, Chuck Grassley of Iowa and Lindsey Graham of South Carolina, asked the Justice Department to investigate whether former British Intelligence officer Christopher Steele, the author of a series of memos detailing allegations regarding Trump and Russia, broke the law by lying to federal authorities about his contacts with reporters regarding his findings. The request marked the first known congressional criminal referral related to the Trump-Russia scandal, and it targeted a figure known for exposing Trump’s Russia ties.

“They’re trying to shut us down,” Rep. Adam Schiff says. “I think external pressure from the president and others is having an effect.”

With the midterm elections looming, Republicans in and out of Congress have pushed the notion that the inquiries have run their course and should be concluded early this year. The top Republicans on the House and Senate intelligence have signaled plans to wrap up their work as soon as possible.

Democratic criticism has focused particularly on efforts by House intelligence chairman Devin Nunes (R-Calif.) to impede the probe. Nunes stepped aside from his committee’s Russia investigation last April amid an ethics investigation into allegations he released classified information, but the panel’s top Democrat, Rep. Adam Schiff of California, says the California Republican continued meddling in the probe, blocking interview and document requests. The ethics committee cleared Nunes last month. But Democrats say he is not the whole problem. They argue that the Republicans who took charge of the investigation in his stead, Reps. Mike Conaway (R-Texas), Trey Gowdy (R-S.C.), and Thomas Rooney (R-Fla.), face pressure from Ryan to quickly end the inquiry.

Speier, Schiff, and other Democrats argue that their Republican colleagues, in a bid to quickly conclude their work, are rushing through witnesses and blocking Democrats’ requests to interview an additional 30 people who may have information on the Trump campaign’s interactions with Russia. Democrats note GOP members have refused to seek follow-up interviews with witnesses including Donald Trump Jr. and Attorney General Jeff Sessions. The Washington Post reported that Schiff recently asked Republicans to seek an interview with Mark Corallo, a former spokesman for Trump’s legal team. According to a new book by Michael Wolff, Corallo quit over concerns that the president obstructed justice by dictating a false statement concerning the secret Trump Tower confab between Trump’s inner circle and a Russian lawyer, allegedly offering dirt on Hillary Clinton on behalf of the Russian government. Schiff said Republicans refused his request.

Republicans have said they plan to interview a few more high-profile witnesses, including Steve Bannon, Trump’s former campaign chief, who, according to Wolff’s book, called the Trump Tower meeting “treasonous.” House Republicans on Friday released statistics they say shows the committee’s probe has been thorough: 297,277 documents produced to the committee, 67 witness interviews conducted by members and staff behind closed doors, 18 subpoenas, and seven “countries visited questioning foreign intelligence services.” But the document appears aimed at supporting the conclusion that the investigation should now come to a close.

“They’re trying to shut us down,” Schiff tells Mother Jones. “I think external pressure from the president and others is having an effect. The buck stops with the Speaker.”

AshLee Strong, a Ryan spokeswoman, sidestepped questions about whether Ryan is pressing the committee to end its probe. But in a statement she notes the need for the panel to finalize its work quickly enough to issue recommendations well before this year’s midterm elections.

“For nearly a year, the House review has been following the facts, and it continues to do so,” Strong says in the statement. “The investigation will conclude when the Committee has reached a conclusion. It’s clear by the endless political posturing by some House Democrats that they would like to see this investigation go on forever. Whether it concludes next month, next year, or in three years, they’ll say it’s too soon. It is also the Committee’s responsibility to provide recommendations to Congress to ensure what took place last election never happens again. The only responsible outcome would be to get those Committee recommendations in time to implement them before the election coming just this year.”

Gowdy says that Ryan has asked him about the “time frame” for completing the probe. But he insists that he did not feel pressured by Ryan. “Paul has never once asked me to shut down an investigation,” Gowdy says, noting that he considered the end of 2017 “a natural boundary.” He says that Democrats hope to drag out the probe, which he claims has failed to reveal evidence of Trump campaign collusion with Russia. (Gowdy spent more than two-and-a-half years investigating Benghazi as the chair of a House select committee scrutinizing this Clinton-related controversy.)

“If Adam had his way, you and I would be having this conversation a year from now,” Gowdy says. Schiff’s list of witnesses is jammed with obscure Russian names, Gowdy claims. “Nobody knows what the hell he’s talking about,” he adds.

Burr has told reporters that he wants to complete his investigation early this year. While acknowledging last month that the probe would continue longer than he hoped, he insisted that “it’s not going to carry over far,” into 2018, unless new revelations create a need for additional witness interviews.

Amid pressure from Trump for congressional committees to drop their investigations into his campaign’s Russia ties and look instead into alleged malfeasance by Hillary Clinton, Burr has seemed to shift in that direction. Despite his stated goal of quickly ending the probe, he told reporters last month that in addition to investigating Trump campaign ties to Russia and a 2015 trip to Moscow by Green Party presidential candidate Jill Stein, the committee was beginning to investigate another campaign. Burr declined to specify, but Senate aides acknowledged his obvious reference to the Clinton campaign.

The committee has previously sought emails from the Clinton campaign and interviewed Democrats, including former Democratic National Committee chair Debbie Wasserman. But Warner suggests in a statement to Mother Jones that the panel is not investigating Trump’s unsupported assertions that Clinton colluded with Russia but is instead questioning Democrats because they were victims of Russian hacking.

“The Clinton campaign was the target of an unprecedented hacking and disinformation campaign,” Warner says. “Of course we would want to talk to anyone who can shed light on what happened in 2016.”

Sen. Chuck Grassley, whose committee is also looking into Russian election interference, has not been coy about his efforts to investigate Clinton. In a Senate floor speech last month, the Iowa Republican said that his committee should look into the Justice Department’s handling of the Trump-Russia investigation and the department’s investigation into Clinton’s use of a private email server. “The political reality is that half the country thinks that our law enforcement establishment gave Hillary Clinton and her aides a pass,” Grassley said. “These questions go to the heart of the integrity of our federal law enforcement and justice system. They are not going away just because Clinton lost the election.”

Since October, Sen. Dianne Feinstein (D-Calif), the committee’s top Democrat, has looked into the Trump-Russia scandal on her own. Feinstein has said she is proceeding without Grassley, and thus without subpoena power, because he insists on pairing each investigative step on Russia with a step to look into Clinton-related matters.

While Republicans work to wind down the congressional Trump-Russia probes, they’re simultaneously ratcheting up pressure on the Justice Department, targeting officials they say have Democratic ties. Bruce Ohr, who previously served in the deputy attorney general’s office, was reportedly demoted because his wife, Nellie, did research for Fusion GPS and because he met with one of the firm’s founders, Glenn Simpson, after the November 2016 election to discuss the Steele dossier. Andrew McCabe, deputy director of the FBI, is retiring after an onslaught of GOP attacks. Republicans, including Trump, have tried to paint the 20-year bureau veteran as a Clinton crony because when his wife ran for state senate in Virginia, her campaign received money from the state’s Democratic Party, which was headed by Gov. Terry McAuliffe, a longtime Clinton ally. (Documents released Friday by the FBI state that McCabe had no conflict of interest in the Clinton email case.) Republicans have also attacked James Baker, the bureau’s top lawyer, who was seen as a Comey ally, with Trump himself celebrating reports that Baker was reassigned within the bureau.

In a loosely veiled bid to undercut Mueller’s Russia probe, Republicans, including Grassley and House judiciary committee chairman Bob Goodlatte (R-Va.), have even pushed for the appointment of another special counsel to investigate the Justice Department’s handling of the Steele memos and the Uranium One deal—in which the State Department, while Clinton was secretary of state, joined other agencies in okaying the sale of a Canadian firm that owned uranium production facilities in the United States to a Russian-owned firm. GOP requests for a new special counsel appear to overlook details of the special counsel law. The statute requires a Justice Department finding that a criminal investigation is warranted and that the department cannot conduct the probe itself due to a conflict of interest. Justice Department officials have suggested the calls for a new special counsel do not meet those criteria.

The agency in December drew the ire of Democrats for allowing select reporters to review texts exchanged by FBI staffers Peter Strzok and Lisa Page, who both worked previously as part of Mueller’s team. Republicans have seized on texts in which Strzok disparaged Trump. (The texts also criticized other politicians in both parties.)

The texts, which Republicans say show anti-Trump bias, have fueled calls by some House Republicans for Trump to fire Mueller, even though Mueller removed Strzok from his team after learning of the messages. Republicans are also eyeing other means to kneecap Mueller. On Thursday, two Trump allies, Reps. Mark Meadows (R-N.C.) and Jim Jordan (R-Ohio), penned an op-ed calling on Attorney General Jeff Sessions to resign due to his supposed failure to control the FBI. Sessions has recused himself from all Justice Department activity related to the 2016 election, including the special counsel probe. His exit would open the door for Trump to nominate a new Justice Department boss who could curtail Mueller’s investigation.