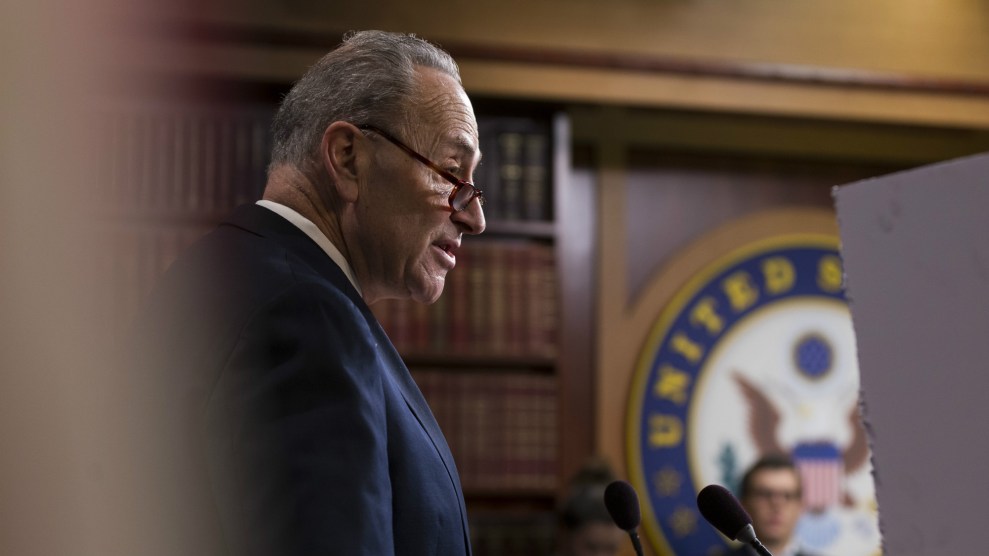 Senate Democrats have traded one looming problem for another. Lawmakers averted a prolonged shutdown fight on Monday when most Democrats reversed course and approved a short-term spending resolution that will also restore funding for the Children’s Health Insurance Program, which Republicans allowed to expire last year. The deal—they hope—will also compel Senate Majority Leader Mitch McConnell (R-Ky.) to take up legislation that would protect Dreamers, undocumented immigrants brought to the country as children, from deportation. But in taking the deal, Democrats have drawn the wrath of a fired-up activist base that now feels betrayed.

Democrats had blocked Republican funding measures last week in part due to pressure from the left to protect Dreamers, who could face deportation following President Donald Trump’s decision last year to end the Obama administration’s Deferred Action for Childhood Arrivals program. Democrats had demanded that any legislation to fund the government also contain a provision to protect Dreamers, but Trump and GOP leaders in Congress refused. The result was a three-day government shutdown.

“For a moment it felt like they were standing for us,” tweeted Erika Andiola, a former Bernie Sanders campaign staffer and a Dreamer.

On Monday, hours before a deal was announced, a broad coalition of left-leaning groups and labor unions, including MoveOn, the ACLU, the immigration-advocacy outfit America’s Voice, and the Resistance-hub Indivisible, announced a renewed effort to push Democrats to hold the line.

But the showdown soon ended with a whimper. Most of the Democratic caucus voted for the funding bill, though 16 members of the caucus, including some of the party’s most-touted possible 2020 presidential candidates, broke with their colleagues and voted to continue the filibuster. The dissenters included Sens. Cory Booker (D-N.J.), Kirsten Gillibrand (D-N.Y.), Elizabeth Warren (D-Mass.), Bernie Sanders (I-Vt.), and Kamala Harris (D-Calif.) “I don’t believe [McConnell] made any commitment whatsoever, and I think it would be foolhardy to believe he made a commitment,” Harris told reporters. If anyone in the Senate is listening carefully to the Democratic base these days, it’s those five.

In a statement, Progressive Change Campaign Committee co-founder Stephanie Taylor blasted “weak-kneed, right-of-center Democrats” for aiding Republican efforts to “hurt kids and tear families apart.” PCCC is an expected critic, but a deeper criticism came from Indivisible co-founder Ezra Levin, who said after the vote that “there need to be repercussions for selling out Dreamers and broadly selling out progressive policy priorities like this.” Levin’s organization’s how-to activism and ubiquity (it has chapters in every congressional district in the country) has helped ensure unanimous Democratic opposition to major legislation, such as tax cuts and Obamacare repeal.

“Democrats caved on September 5th, they caved again on December 8th, they caved on December 22nd, and now they just caved again,” he said, pointing out that Democrats have now repeatedly agreed to short-term funding measures that don’t protect Dreamers. “Their promise is they’re really going to fight hard next time. It’s totally unbelievable. The idea that they are gonna take a pinky-swear promise from Sen. McConnell after he’s broken so many promises before is political malpractice—it’s absurd to believe that. The only answer is that [they] aren’t actually interested in fighting for the Dreamers.”

The end of the shutdown, weeks away from the beginning of primary season and a special congressional election in Pennsylvania, could have ripple effects at the grassroots level. Levin relayed a conversation he’d had over the weekend with the leader of an Indivisible chapter in a hotly contested House district. “I was wondering, ‘What am I actually knocking on doors for if they just kept on caving?’” she told him. “‘But then when they actually stood and fought on the [funding bill], it made me want to fight a lot harder.’”

“What they’ve done is taken away some of that energy,” Levin said.

A consequence of yet another short-term funding bill is that Democrats will get yet another shot at this next month. If they can walk away with a deal on immigration, activists might forget that it took one extra vote to get there. But for now, that’s a big “if.” If you can’t trust Mitch McConnell, who can you trust?