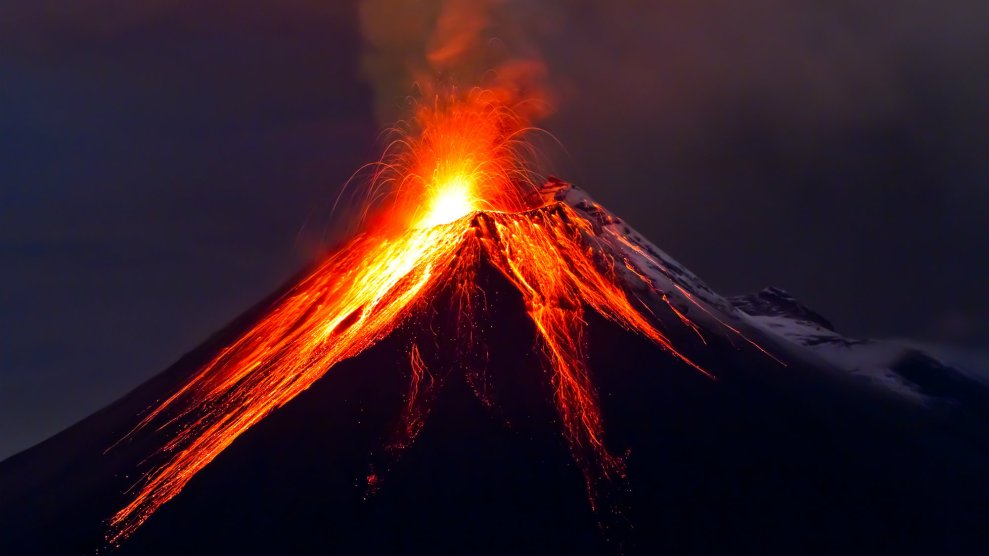 As the first midterm elections of the Trump era creep closer, scientists across the country are emerging from their labs to run for Congress. The president’s treatment of science—from proposed funding cuts to climate change denial—is one of the driving forces pushing researchers into the political ring. As Mother Jones’ Tim Murphy reported last July:

All told, more than a dozen Democratic candidates with science backgrounds have announced their candidacies for Congress or are expected to in the coming months. The boomlet of STEM-based candidates amounts to a minor seismic event in a community where politics and research have traditionally gone together like sodium and water. Trump has been in office just six months, but he’s already done something remarkable—he’s gotten scientists to run for office.

Jess Phoenix is one of them. A geologist and volcanologist—she studies active volcanoes—Phoenix is competing for the Democratic nomination to take on GOP Rep. Steve Knight in California’s 25th Congressional District. Knight, one of seven California Republicans representing districts won by Hillary Clinton in 2016, is widely seen as one of the most vulnerable incumbents in the country.

Phoenix expects that $8 million to $9 million will ultimately be spent on the high-profile race. So why would a researcher want to put her scientific career on hold and launch an expensive, and likely bitter, battle for elected office? According to Phoenix, it’s because much of what she values—science, education, public lands—are “under assault” from people like Knight and Trump. Last year, the White House proposed a budget containing huge cuts to government funding for research. The administration has also rolled back a wide range of Obama-era environmental policies, including policies aimed at lowering greenhouse gas emissions and limiting fracking.

“Now is a really unique time in our history as a country,” says Phoenix during an interview with Kishore Hari on our Inquiring Minds podcast. “We are at sort of a cultural inflection point where we have an assault on facts and the truth like we have never seen before. We have people who are outright denying basic science and the value of science in society.”

Phoenix calls Knight a “climate change denier”—a charge the Knight campaign flatly rejects. Last July, Knight was one of 46 House Republicans who sided with Democrats to block an amendment that would have removed a requirement for the Department of Defense to study the security threats posed by climate change. That same month, Knight joined the bipartisan Climate Solutions Caucus in Congress, saying in a statement at the time that “climate change is a growing issue in our international community” and that he hoped to pass “common sense, bipartisan legislation regarding climate change.”

“Most people, and probably every scientist, would conclude based on that piece of evidence that he is not a climate change denier,” Matt Rexroad, a Knight campaign spokesman, told Mother Jones in an email.

“We have an assault on facts and the truth like we have never seen before. We have people who are outright denying basic science and the value of science in society.”

For her part, Phoenix points to Knight’s record of opposing existing policies intended to rein in global warming. In 2014, Knight told the SCV Beacon that AB 32, a 2006 California law requiring the state to reduce its carbon emissions, was part of a “a rash mission to curtail global warming.” According to Knight, “We are adopting policies that are not embraced elsewhere in the world, at the expense of our economic future. AB 32 is killing California’s economy and raises the cost of energy for both businesses and homeowners. Job killing measures like this should not be replicated at the federal level.”

The League of Conservation Voters, an environmental advocacy group, gives Knight a 0 percent lifetime rating for his votes on environmental and energy issues. In 2015, for example, he backed legislation that would have repealed the Obama administration’s Clean Power Plan, which limited emissions from power plants. Obama vetoed that bill, but the Trump administration has since moved to rescind the regulations.

Phoenix is clearly a progressive. She supports a $15-per-hour minimum wage, single-payer healthcare, and a congressional committee to investigate gun violence. In the June primary, she’ll face off against several other Democratic candidates, including Bryan Caforio, an attorney who lost to Knight by 6 percentage points in 2016.

During the last campaign, Caforio criticized Knight’s response to the massive leak from a natural gas facility at Aliso Canyon that impacted thousands of the district’s residents. Knight, Caforio told Politico in January 2016, was “totally AWOL” from the disaster. Knight subsequently sponsored a bill, signed by President Barack Obama in June 2016, aimed at “preventing future leaks at natural gas storage facilities.”

In an email to Mother Jones, Phoenix picked up this line of attack, calling Knight’s response to the Aliso Canyon leak “too little, too late.” The gas leak was discovered on October 23, 2015, and thousands of residents evacuated their homes in the following weeks. Knight first visited the area on January 8, 2016, a spokesman for Knight told the Los Angeles Times.

The aftermath of the leak is one area in which Phoenix sees an opportunity to leverage her professional background. “Aliso Canyon is currently not adequately safe to continue operations in spite of its recent re-opening, and my scientific training allows me to view the issue through a fact-based lens, rather than one that is influenced by large corporate donors,” Phoenix told Mother Jones. “The environmental scale of this natural disaster cannot be overstated, and Steve Knight only took action when he could no longer ignore residents’ outcry.”

“The geology of our region is prohibitive for large-scale gas storage facilities like Aliso Canyon,” she added. “We are risking lives in unnecessary ways, and we can and should be better for our community and our environment.”

Phoenix thinks her training will help her deal with other policy issues, too. She points to the fires, mudslides and floods that have ravaged California in recent months. “We need to have people in office who understand that these threats come from all different angles,” she says on the podcast. “We are going to see more and more disasters and incidents like that with climate change.”

Not everyone is convinced that scientists should get involved in politics; some academics have openly worried that doing so could damage their image as unbiased and nonpartisan scholars. Phoenix disagrees.

“We need everybody, all hands on deck,” she says. “That includes scientists.” Science, she adds, is inherently political because governments prioritize how they invest in research. “If we don’t speak up, we are going to lose our funding,” she says. “We need scientists speaking up, speaking out, donating, running. We need scientists involved in every facet of society.” Funding cuts aren’t just a hypothetical fear for Phoenix and her colleagues; in 2009, then-Louisiana Gov. Bobby Jindal (R) infamously mocked the Obama administration for spending tax dollars on “something called ‘volcano monitoring.'”

Phoenix seems to be part of a larger trend. Her campaign received an early boost from 314 Action, an organization named after the first three digits in pi that encourages scientists to run for office. (She also has the support of several Star Trek actors.)

But while she wants more scientists to run for office, she’s adamant that science itself must remain above politics. “Science really doesn’t belong to a particular party,” she says. “It never has, it never should.”

You can listen to our full interview with Jess Phoenix below.