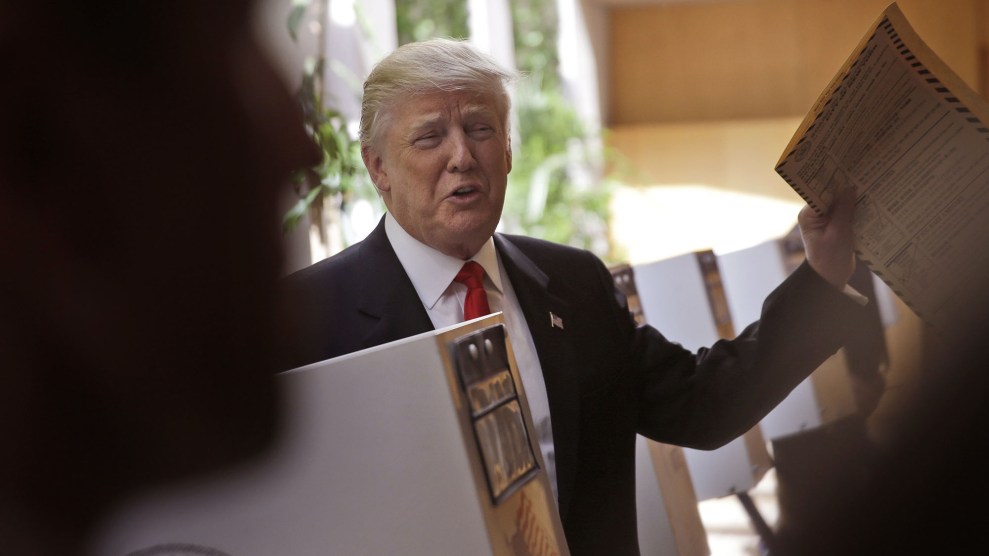 On Tuesday, a federal judge allowed a 35-year-old court settlement prohibiting the Republican National Committee from challenging the eligibility of voters at the polls to expire. The ruling, by District Court Judge Michael Vazquez of New Jersey, could allow the Republican Party to undertake new voter suppression efforts, such as purging voting rolls and intimidating voters at the polls, under the guise of combating voter fraud. The case hinged on Democrats being able to prove a recent violation of the decree, which dated back to the early ’80s.

I explained the origins and significance of the case in a December story:

In 1981, during a campaign for governor in New Jersey, the Republican National Committee launched a “Ballot Security Task Force” that sent sample ballots to voters in predominantly African American and Hispanic precincts. When 45,000 letters were returned as undeliverable, the RNC tried to remove the voters from the rolls. To challenge those voters if they showed up to cast a ballot, it hired off-duty cops to patrol polling sites in black and Hispanic neighborhoods in Newark and Trenton. The officers carried firearms and wore armbands reading “National Ballot Security Task Force,” and the RNC posted large signs at the polling places saying, “Warning: This area is being patrolled by the National Ballot Security Task Force. It is a crime to falsify a ballot or to violate election laws.”

Republican Tom Kean Sr. defeated Democrat Jim Florio by 1,797 votes in the closest governor’s race in New Jersey history. (One of Kean’s top advisers, Roger Stone, later advised Donald Trump.) “There was no doubt in my mind enough people were intimidated not to show up at the polls,” Florio told WNYC.

After the election, the Democratic National Committee won a court settlement ordering the RNC to “refrain from undertaking any ballot security activities” anywhere in the country.

Democrats argued that former Trump press secretary Sean Spicer violated the consent decree and deposed him in December. In an interview with GQ published in November, Spicer said he visited the fifth floor of Trump Tower on Election Day, when he was communications director for the RNC. The fifth floor was where the Trump campaign ran poll-monitoring operations. Campaign workers were instructed to contact officials there if they witnessed any “voter fraud” across the country. There were clear signs on the doors instructing RNC staff to stay away from that floor in order to avoid violating the consent decree. “It was a sign you can’t miss,” one person present that night told Politico. “It was pretty glaring.”

“The Trump campaign made it abundantly clear prior to the election that it would be conducting ballot-security efforts,” DNC lawyer Angelo Genova wrote to the court. “And Exhibit A shows that a senior RNC official was at the nerve center of those efforts on Election Day.”

Prior to the election, the DNC also claimed the RNC had violated the consent decree when the Trump campaign used its website to recruit “Trump Election Observer[s]” to “Stop Crooked Hillary From Rigging This Election.” (The DNC argued in court that the RNC was “supporting and enabling the efforts” of the Trump campaign.) On the same day, Trump told his supporters to monitor the polls for potential voter fraud. “The only way they can beat [us] in my opinion, and I mean this 100 percent, is if in certain sections of the state they cheat, okay?” Trump said in Pennsylvania in August 2016. “So I hope you people could, sort of, not just vote on the 8th—could go around and look at other polling places and make sure it’s 100 percent fine.” He specifically called on law enforcement to check for “cheating” and said “we have to have the sheriffs and the police chiefs and everybody watching”—reminiscent of the RNC’s illegal conduct in New Jersey in 1981.

Judge Vazquez, an Obama appointee, declined to extend the consent decree before or after the election. “As far as what’s before this court, you’ve presented me with no evidence of actual voter suppression efforts on the day of the election, much less tying it to the RNC,” he told DNC attorneys recently. He concluded in a short court order on Tuesday, “The DNC did not prove, by a preponderance of the evidence, a violation of the Consent Decree.”

The consent decree had required Republicans to get court approval for any effort to question voters’ eligibility at the polls, which deterred the party from many “ballot security” activities. The lifting of the order gives Republicans a new opening to try to remove voters from the rolls and mount new challenges at the polls. This is particularly concerning to voting rights advocates at a time when Trump has falsely stated that millions of people voted illegally in the last election, and as the Supreme Court prepares to hear a case on Wednesday that could weaken the National Voter Registration Act of 1993, allowing Republican-controlled states to make it harder to register to vote.