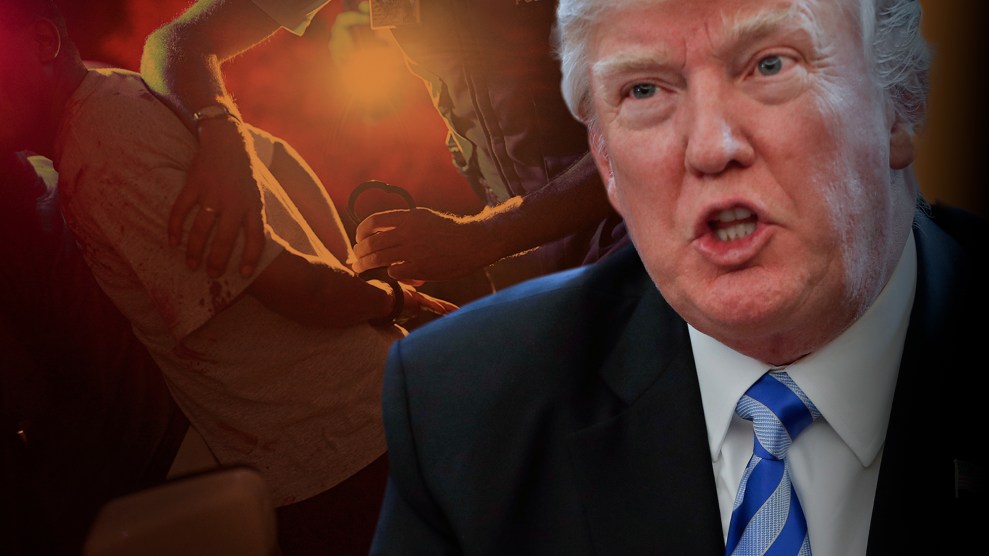 The full reality of President Trump’s bombastic promises on illegal immigration is finally taking shape, and the picture is, unsurprisingly, bleak. After several reports pointing toward an increasing trend of Immigrations and Customs Enforcement (ICE) targeting undocumented immigrants with no criminal background or low-level offenses—the exact people President Obama said the country shouldn’t prioritize deporting—we now have the statistics to paint a full picture: According to a new report from ICE, while border arrests have slowed, arrests of undocumented immigrants within the United States have in fact soared since Trump took office. The number of arrests of immigrants for civil violations increased by 30 percent, and the number of immigrants without criminal records arrested more than doubled. Overall removal numbers declined, however, by about 6 percent.

The data, released on Tuesday, provides the most complete understanding to date of how the enforcement landscape has shifted since January, when the Trump administration issued an executive order that broadened enforcement priorities and expanded the categories of who could be considered a priority for deportation. The order, plus a subsequent February memo from then-Department of Homeland Security Secretary John Kelly, means that ICE “no longer exempts classes or categories of removable aliens from potential enforcement,” according to the report, so that anyone who has come to the country without authorization could be deported. This notably reversed Obama-era policies, which focused on deporting immigrants with serious criminal convictions or who posed a threat to public safety.

The new numbers show that ICE is “arresting and deporting more people—and significantly more people—within the US than in the Obama administration,” says Randy Capps, director of research for US programs at the Migration Policy Institute, a nonpartisan think tank. Though deportation and arrest numbers are still nowhere near as high as they were during periods of the Obama and Bush administrations, the report confirmed immigration advocates’ fears that the Trump administration’s expansion of the definition of a “criminal alien” would in fact lead to more arrests and detention of immigrants for smaller charges—including those without any convictions at all. Arrests of undocumented immigrants with no criminal convictions actually represented the largest increase in types of arrests. ICE’s report also revealed the types of charges and convictions it considers criminal, revealing that two of the most common kinds of charges and convictions were traffic offenses.

Here are the other key takeaways:

The majority of people being arrested have criminal convictions or have been charged, though there are some shades of gray.

Reflecting its new enforcement policies, ICE listed out the categories of the criminal charges and convictions of the immigrants it arrested. ICE states that the “vast majority” of administrative arrests were of convicted criminals or of people with criminal charges, and that only 11 percent of people arrested had no known criminal convictions or charges. However, it’s important to note that the four largest categories of criminality among those arrested were driving under the influence, “dangerous drugs,” “immigration,” and “traffic offenses.” (Immigration crimes include illegal entry, illegal reentry, false claim to US citizenship, and trafficking, according to ICE.)

It’s hard to tell whether this means that the majority of people were arrested for traffic offenses, however, because ICE counted all criminal charges and convictions for each person arrested—and someone may have more than one charge and more than one type of charge. As a result, the data does more to reveal the types of charges overall rather than what one individual has been charged for, says Capps. This also explains why the total numbers of criminal charges and convictions is higher than the total number of people arrested.

Arrests of immigrants without any criminal charges more than doubled over the past year.

ICE made 10,000 more “at-large” arrests, which are arrests that occur within a community as opposed to in a jail or prison setting, in FY2017 than during the prior year. ICE said that it increased these arrests after the executive order, particularly in areas where local or state law enforcement agencies do not cooperate with ICE or restrict access to its jails. Within those arrests, the number of immigrants who had no criminal convictions or charges saw significant increases.

ICE significantly increased the number of immigration detainers it issued, but also had a record number of them declined.

A detainer is a request that ICE makes to law enforcement agencies, either asking the agency to notify ICE if a person subject to deportation is about to be released from criminal custody and to keep that person in custody. ICE noted that it issued 65 percent more detainers this year as compared to last year, but also received a record number of declined detainers from law enforcement agencies. According to ICE, this was the greatest number of declined detainers in the last three fiscal years, indicating that sanctuary policies may be having an effect.

Overall, though, deportation numbers are actually lower than last year, primarily due to fewer arrests and removals at the border.

ICE saw a 24 percent decrease in criminal border removals from fiscal year 2016 to 2017, and fewer people were arrested at the border, possibly due to an “increased deterrent effect from ICE’s stronger interior enforcement efforts,” the agency suggests. A larger share of removals are coming from interior arrests, and interior arrests now account for 36 percent of removals compared to 27 percent last year.