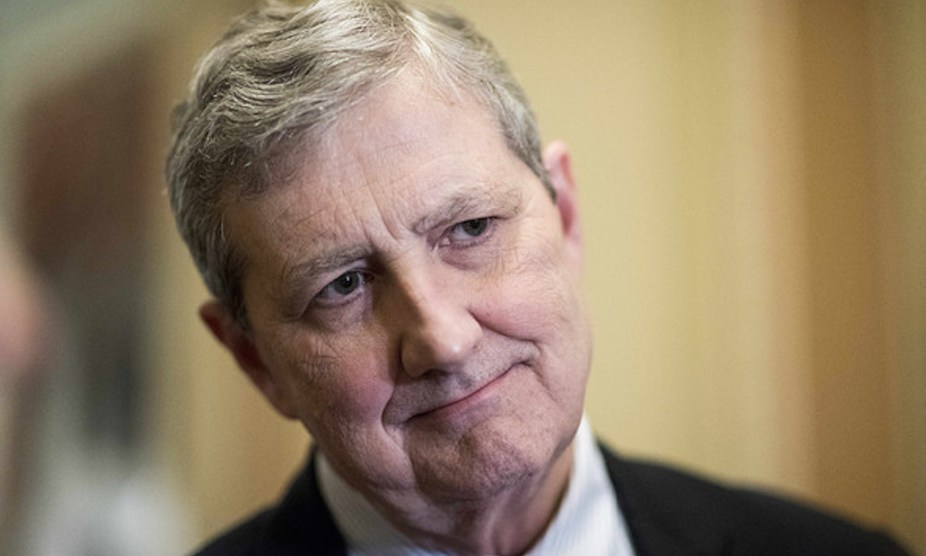 In a hearing this week for six of President Trump’s judicial nominees, Sen. John Kennedy (R-LA) simply humiliated one of the potential judges. He asked Matthew Spencer Petersen a few questions that should be basic for anyone working in law. Yet Petersen, a Republican commissioner on the Federal Election Commission and a nominee to the U.S. District Court for D.C., not to mention a graduate of the University of Virginia law school, was stuck. The key exchange—over his understanding of a motion in limine and a few other legal terms—went viral:

MUST WATCH: Republican @SenJohnKennedy asks one of @realDonaldTrump’s US District Judge nominees basic questions of law & he can’t answer a single one. Hoo-boy. pic.twitter.com/fphQx2o1rc

“Do you know what a motion in limine is?” the senator asked.

“[M]y background is not in litigation…I haven’t had to, again, do a deep dive,” Petersen said.

“Yes, I’ve read your resume,” Kennedy replied. “Just for the record, do you know what a motion in limine is?”

“I would probably not be able to give you a good definition right here at the table,” Petersen said.

This is not the first time Sen. Kennedy has publicly challenged Trump’s wave of judicial nominees, many of whom are controversial and some of whom have been deemed not qualified by the American Bar Association, but most of whom have largely received a rubber stamp of approval from Republicans as they move through the confirmation process. Kennedy in fact is the only Republican to have voted against one of Trump’s judicial nominees so far. But there are a number of other ways he’s drawn attention to some of the most questionable, headline-grabbing people that Trump has nominated to the federal bench.

Earlier in the year, Kennedy embarrassed then-nominee to the 6th Circuit John K. Bush, who had previously drawn controversy for the more than 400 pseudonymous blog posts he had written over the course of nearly a decade. In a June Senate hearing, Buzzfeed reported that Kennedy had no questions for Bush; instead, he just shook his head and said: “Mr. Bush, I’ve read your blogs. I’m not impressed.” (Kennedy, though, still voted to confirm him in July.)

Kennedy’s most explicit disapproval so far seems to have been focused on two of Trump’s most controversial nominees, Brett Talley and Jeff Mateer, who both made headlines this week when the White House abandoned their nominations after Senate Judiciary Committee Chairman  Chuck Grassley (R-Iowa) spoke out against them.

In a hearing at the end of November for two other nominees, David Stras and Stuart Kyle Duncan, Sen. Kennedy put on a show—in part questioning the two nominees up for confirmation and in part calling into question the validity of the broader judicial slate by explicitly referencing the questionable behaviors of Talley, Mateer, and another controversial pick.

“Mr. Justice, have you ever blogged anonymously or otherwise in support of the Ku Klux Klan?” Kennedy asked, referring to Talley, who appears to have defended the Ku Klux Klan in a message board post in 2011. Stras and Duncan replied that they had not. He continued, “Mr. Justice, have you ever described a child as being part of Satan’s plan?”—a nod to Mateer, who has drawn attention for making similar remarks about transgender children. They again replied that they had not.

He wasn’t just using Duncan and Stras, though, as a foil to Mateer and Talley. Duncan is actually a nominee from Louisiana, and as such the senator from whom he needed approval in the traditional “blue slip” process—in which a nominee’s home senators are asked to return a blue slip in approval of their confirmation—was Kennedy himself. Kennedy did turn in a blue slip for Duncan, but, in an unorthodox move, marked himself as “undecided” on the sheet.

The reason Kennedy has been a thorn in the administration’s side, at least in the case of Duncan, is not just because of these judges’ qualifications. It also seems to have something to do with a person inside the White House; in that late November hearing, Kennedy explained his reasoning for keeping approval from Duncan with a not-so-subtle challenge to White House counsel Don McGahn’s influence over the nomination process. As part of the blue slip process, home state senators are typically consulted before the president moves forward with a respective senator’s nominee. Kennedy claims that this did not happen with Duncan and was, to put it lightly, perturbed.

“I had been through Mr. Duncan’s questionnaire very carefully…[it] seems to imply that Mr. Duncan’s name came from Senator Cassidy and me, Senator Kennedy,” Sen. Kennedy said in the hearing. “At least from my point of view, that is not accurate. I first learned about Mr. Duncan’s nomination when I received a phone call—actually a series of phone calls—from [White House counsel] Mr. Don McGahn. Mr. McGahn was very firm that Mr. Duncan would be the nominee.”

“I want to give Mr. McGahn full credit he came back later and apologized,” Kennedy continued. “But his firmness he did not relent on. So the truth is that I don’t know Mr Duncan very well. I’m looking forward today to learning more about him.”

“I say this with as much respect as I can possibly muster,” Kennedy concluded during that November hearing. “I hope that [Duncan] can demonstrate to me today that he is the second coming of Justice Holmes or Justice Scalia and not the second cousin of somebody who is politically connected in the Washington swamp.”