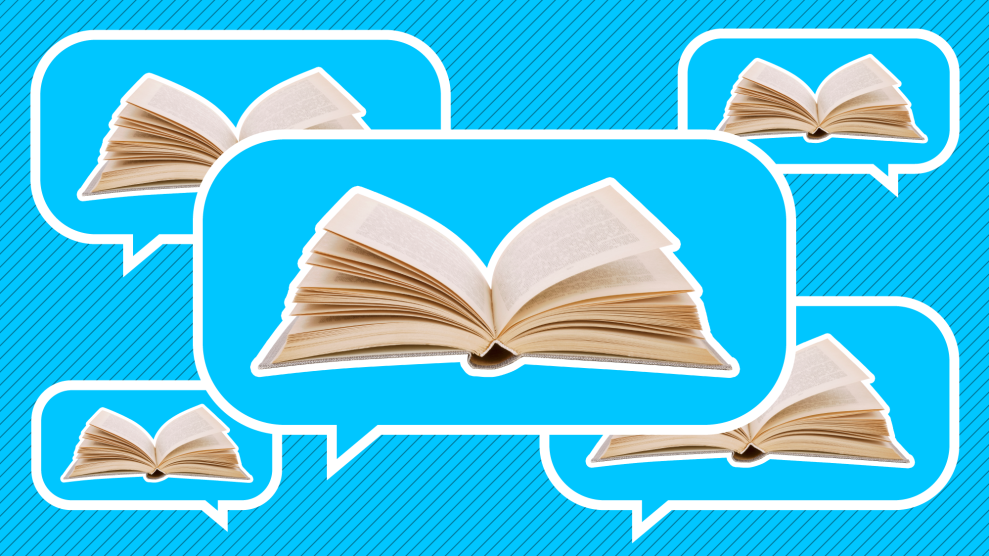 The events of this year have some Mother Jones readers turning to books for perspective and comfort. Leonard Jay Hastings of Manchester, Michigan, picked up The Plot Against America and tells us this book about a dictatorship “reminds the reader that the corrective measures lie with the citizen public and not primarily with our present elected officials.” Others like Emily Wilkinson in Pasadena, Texas, have immersed themselves in other worlds. Emily says The Hitchhiker’s Guide to the Galaxy “provided a welcome escape from reality.”

We asked you to tell us which books helped get you through 2017. The responses below from readers have been lightly edited for length and clarity.

Frankenstein by Mary Shelley
“Mary Shelly’s classic transported me far, far away to the Arctic edge of Earth, giving me a nuanced sympathy for those who feel misunderstood or outcast while still carrying out great evil. An incredible story with with twists and developments I totally didn’t see coming. Can’t believe I had never actually read it before 2017.” —Philip Ochs, Iowa City, Iowa

The Moral Animal by Robert Wright
“It helped me to better understand how and why people are so fucked up.”— John Tharp, Beaverton, Oregon

All the President’s Men by Carl Bernstein and Bob Woodward
“It’s a reassurance of the power of journalism and that truth and the law prevails. It’s also remarkable how many of the players have an equivalent today: a questionable AG, a collection of ratfuckers sabotaging campaigns, a press secretary caught in lies, and a president eventually brought down by his own words. It’s a crystal ball reassuring you that there will be justice.” —Nickie, Portland, Oregon

Alexander Hamilton by Ron Chernow
“This biography by Ron Chernow gave me the perspective that intense partisanship was present from the foundation of our government. The personal attacks, fake news, and charges of incompetence and/or treason were present in Adams vs. Hamilton, Jefferson/Madison vs. Hamilton, Jefferson vs. Adams, etc. Yet we still survived and even flourished as a nation.”—John M. Lynch, Cherry Hill, New Jersey

A Gentleman in Moscow by Amor Towles
“It was filled with grace; I don’t know how else to explain it. A tale of someone who treated others with respect and consideration; the Count, limited to the walls of his hotel by house arrest, experiences Russia’s descent into tyranny with a grace of good manners that felt healing. I long for people who treat others with consideration, particularly on the internet. Today’s social media infestation of trolling (of which I admit, to some small degree, of being guilty) repulses me, and the grace of A Gentleman in Moscow pointed out the grace I wish people would give one another here, in the comm box.” —Rebecca Zicarelli, Bethel, Maine

The Ends of the World by Peter Brannen
“The book is a wonderfully entertaining description-story of how the planet Earth’s biosphere has died off & regenerated over the eons. Understanding the cycles of the ephemeral nature of life and the physical landscape helps me to deal with what is happening today.” —Charlotte Mann, Dover Plains, New York

So Where Are We? by Lawrence Joseph
“During dire times one can escape into fantasy and fiction, or immerse in a meditation on cataclysm that nonetheless contains great beauty and moments of affirmation and hope. I found the latter in this extraordinary book of poems by the lawyer and poet Lawrence Joseph. It’s ostensibly centered around the terrible social, political, and military shifts following the attack on the World Trade Center, but it speaks deeply to how an individual struggles and suffers, but also affirms and loves. Here we have moral indignation with intellectual and emotional heft. Not an antidote to our difficult times exactly, but a source of steady comfort.” —Marianne Szegedy-Maszak, Senior Editor, Mother Jones

Obama: An Intimate Portrait by Pete Souza
“Pete Souza’s years spent with President Obama, day in and day out, gave us a masterpiece of a book. We didn’t know how good we had it. Savoring every photograph, the feel of the pages, took me to another time and place. It made me feel proud, sad, comforted and even more determined to RESIST. Obama: An Intimate Portrait was GLORIOUS.”—Julie McNichol, Gulfport, Florida

Shock Doctrine by Naomi Klein
“When in January, I thought the Trump administration was taking us on the the final journey to the end of the world as we knew it, reading Shock Doctrine reminded me of how blatantly authoritarian the American government has been with any country it sought to control. Learning how those countries weathered their revolutions and economic upheavals (caused by the American economic establishment) made me think that the world just might be able to withstand Trumpism.”— Dr. Khadejah Kosarich Abuarrosh, Benghazi, Libya

The Man Who Planted Trees: A Story of Lost Groves, The Science of Trees, and A Plan to Save the Planet by Jim Robbins
“This non-fiction book by Jim Robbins brought home to me the fact that climate change is moving at warp speed, right here at home, with the death of hundreds of thousands of acres of trees per year through disease alone. The increased rage of wildfires kills many, many more. Add to that total, careless development, and the picture seems hopeless. But wait! This is a story of a man who set out to save trees, by cloning the few giants that are still with us. It’s an account about the science of trees and why we need to work hard to protect this workhorse of a carbon catcher—an extremely efficient carbon catcher at that. Trees can work to save us if we save and cherish them.”—Heather L. Kibbey, mayor of the city of Rivergrove, Oregon

The Summer of Beer and Whiskey by Edward Achorn
“In what has been a tumultuous year for many, including myself, I found myself escaping it with nights at the ballpark. The only issue with that was my team tended to make those nights not so enjoyable, so this book gave me another route to escape through America’s Pasttime. A story about how immigrants saved the game we love today felt very poignant this year despite this book not being written in 2017. The book is a wild ride through the 1884 season.” —Zach Sturiale, Baltimore, Maryland

The 48 Laws of Power by Robert Greene
“I re-read this classic every year, and 2017 made it required reading. What it does is explain in detail, with historical examples, all of the best strategies, gambits and scams that have historically brought men to powerful positions, in social groups, companies, armies and nations, even the world. It doesn’t try to moralize where the ‘good’ was in an example, it simply shows the mechanics and why the methods needed to be the way they were. It has been an exacting predictor of what Trump et al will do, have done, for the last year; many of my predictions came true because I’d developed them from what is in this book.” —Gregory Bryan Rush, Adelanto, California

What Happened by Hillary Rodham Clinton
“It made me realize I made absolutely the right decision in voting for her (not that I had any doubt, as I’ve always voted Democrat, but it helped me to understand WHY it was the right decision). Very intelligently written, it explained so many things so very well!”—Victorie, Seattle, Washington

La Belle Sauvage by Philip Pullman
“Aside from the fact that it is one of the greatest works of fantasy ever written by a master writer, it’s just such a well-told story that I was instantly transported into a world far away from this one for hours at a time. Sure, things aren’t perfect in Malcolm and Alice’s version of Britain, but at least they were shown doing what they could in the face of creeping fascism and in the face of very long odds, to protect someone who might not otherwise have survived. It’s quite dark, but quite exhilarating at the same time.” —Jerome Wong, Pompton Plains, New Jersey

Stamped from the Beginning: The Definitive History of Racist Ideas in America by Ibram X. Kendi
“Cut-and-dry analysis of how racism in its several forms is woven into the fabric of America. Recognition of the problem is the first step in finding a cure. I guess I was late to the party in catching this book, but it is easily the most important book I read this year.”—Dwight Jurling, Taipei, Taiwan

A Distant View of Everything by Alexander McCall Smith
“McCall Smith’s books are calm, even when the characters have conflicts. These books make me remember that there’s more to life to think about than an idiot in the White House. McCall Smith writes intelligent, peaceful books for those of us who need a respite from life in America right now. During my life, I’ve read many serious books. Now that I’m older, I’ve decided to read books that make me happy. This is one of them.”—Diane Wahto, Wichita, Kansas

Once Upon a Time in Russia: The Rise of the Oligarchs―A True Story of Ambition, Wealth, Betrayal, and Murder by Ben Mezrich
“The book explains so well the rise to power of Vladimir Putin, his personal and public characteristics – it helped me understand how deep this Russia thing could possibly go. Also, I listened to it on audio book while walking for exercise, which I need more than ever these days to stay un-depressed. It was so fascinating that I’d walk for longer and longer in order to keep listening. Great, great read.”—Cori G. Carr, Canton, Michigan