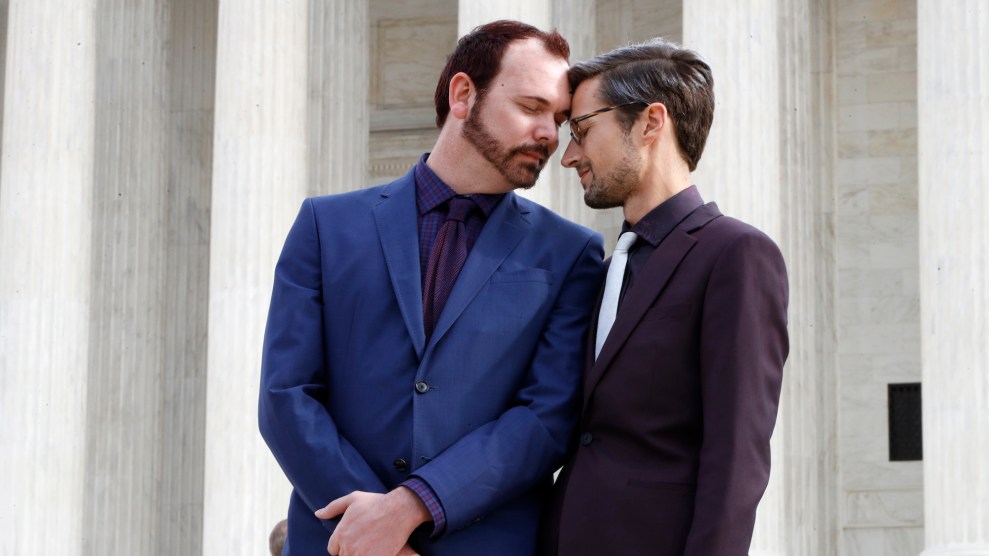 As the Supreme Court heard oral arguments Tuesday in the landmark case Masterpiece Cakeshop v. Colorado Civil Rights Commission, two things became clear. First, the conservative justices clearly want to side with Colorado baker Jack Phillips, who refused to make a wedding cake for David Mullins and Charlie Craig, a same-sex couple, on religious grounds. And second, they have no idea how to rule in his favor without upending decades of civil rights law.

The arguments were as contentious as the stakes were high. A ruling in favor of the baker, endorsing anti-gay discrimination in the name of free practice of religion, could have serious implications for public accommodations laws across the country that are designed to protect minorities of all sorts from the kind of discrimination Mullins and Craig encountered.

As usual, all eyes were on swing Justice Anthony Kennedy, who authored the 2015 majority opinion legalizing same-sex marriage. In that case, Obergefell v Hodges, Kennedy went out of his way to characterize opponents of same-sex marriage as good people whom the court respected. “Many who deem same-sex marriage to be wrong reach that conclusion based on decent and honorable religious or philosophical premises,” he wrote. Phillips might be considered one of those people, and Kennedy delivered harsh criticism of the Colorado Civil Rights Commission, which sided with Mullins and Craig, for bias against religious people.

“It seems to me that the state in its position here has been neither tolerant nor respectful of Mr. Phillips’ religious beliefs,” Kennedy said. He noted that one of the members of the commission had stated that “Freedom of religion…has been used to justify all kinds of discrimination throughout history, whether it be slavery, whether it be the [H]olocaust…and to me it is one of the most despicable pieces of rhetoric that people can use…to hurt others.” Kennedy asked whether, if the court found that this display of “hostility to a religion” showed improper bias, the judgment of the lower court in Mullins’ and Craig’s favor should stand.

But Kennedy couldn’t get past the significant civil rights implications of a ruling in the baker’s favor. At one point, he asked Solicitor General Noel Francisco, who joined the case on Phillips’ side at the behest of the Trump Justice Department, “If you prevail, could the baker put a sign in the window saying that we don’t bake cakes for same-sex marriages? Would that not be an affront to the gay community?”

Much of the debate centered on where to draw the line between art and business. If Phillips’ cakes are an artistic expression of his free speech, as his lawyers claim, then, the justices asked, wouldn’t the same protections extend to florists, tailors, chefs, jewelers, hairdressers, and makeup artists who refuse to serve certain clients?

Conservative Justice Samuel Alito attempted to rescue Phillips’ lawyer, Kristen Waggoner, from the barrage of inquiries about artistic professions with a softball question about whether, say, an architectural design might be considered speech, as a building is more permanent and can make a statement. But to his surprise, Waggoner suggested that the architect, under the ruling she’d like to see from the court, would not be protected the way Phillips would be.

ACLU attorney David Cole, representing Mullins and Craig, argued that there’s simply no way to craft a decision that could create a coherent legal doctrine based on whether or to what extent a cake is art. Instead, Cole told the court, the case should be a simple one, based on the conduct of people who provide services in the marketplace. It’s not necessary to decide whether hairdressers or chefs or tailors are artists, he argued; it’s only their conduct that matters. And in Phillips’ case, he said, “The only thing the baker knew about these customers was that they were gay. And, as a result, he refused to sell them any wedding cake. There was no request for a design. There was no request for a message. He refused to sell them any wedding cake. And that’s identity-based discrimination,” which is prohibited by statute in Colorado.

The conservative justices were clearly inclined to disagree. But where to draw the line on protected artistic expression may continue to vex them as they deliberate on the case in advance of a likely ruling in the spring.