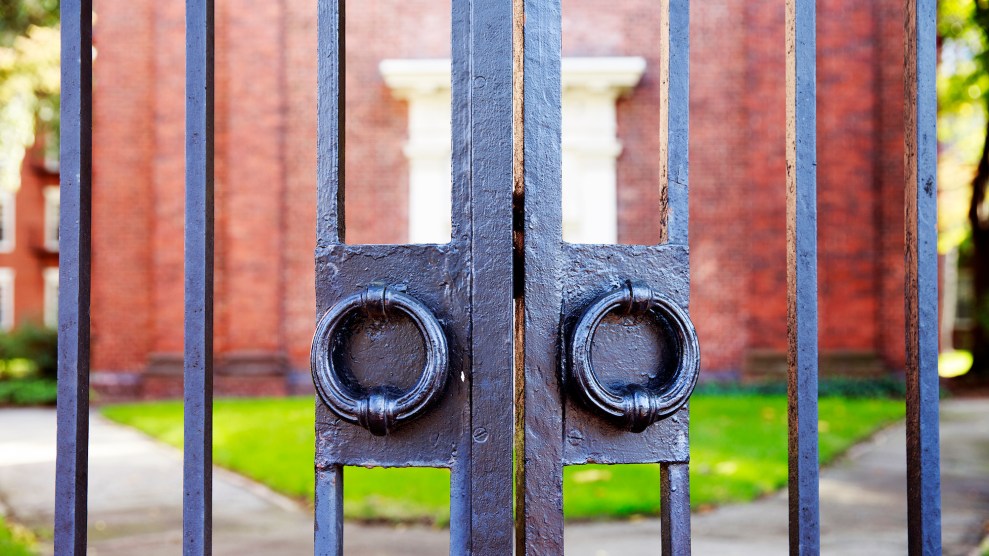 A Republican bill could cut off access to college to some low-income students.EvgeniiAnd/Getty

The House Republican tax bill generated an uproar among graduate students when it proposed a tax on their tuition waivers that would cost many of them thousands of dollars a year. That provision seems to be gone in the final Republican compromise bill, but another piece of Republican legislation heading to the House floor could spell even more trouble for college affordability.

The bill, “Promoting Real Opportunity, Success, and Prosperity Through Education Reform Act”—known as the PROSPER Act—seeks to reauthorize the Higher Education Act of 1965, the law that directs the federal government’s role in higher education. Among its key functions, the HEA provides for the $24.2 billion federal student aid program and the terms by which institutions and students qualify for financial support. President Lyndon Johnson first signed the legislation into law as part of his Great Society reform agenda, in an effort to extend the benefits of higher education to low- and middle-income students who, without a federal financial aid system, could not afford college tuition.

The legislation, last reauthorized in 2008, is due for its 10-year refresh. Rep. Virginia Foxx (R-N.C.), who chairs the House Committee on Education and the Workforce, introduced the 529-page PROSPER Act on December 1. Some of the bill’s provisions, like the elimination of upfront processing fees on student loans and a simplified process for applying for federal aid, would alleviate hurdles to college access. But much of the proposed legislation restructures federal student aid in a way that would increase burdens on low- and middle-income students. The American Council on Education, the nation’s largest higher education research and advocacy organization, says the bill would “upend the system of federal financial aid by cutting programs, restructuring policies, and imposing new regulations that are harmful to students and families.”

Democrats have balked at the student aid proposals in Foxx’s bill and complained that they were excluded from the bill’s writing. They say the hurried lawmaking process—the committee met to debate the bill just 11 days after its introduction—did not allow sufficient time for public scrutiny, a view shared by 37 higher education advocacy and professional organizations. During Tuesday’s nearly 14-hour committee meeting, Democrats introduced close to 40 amendments, many of which were aimed at reinstating grant and aid programs scrapped under Foxx’s proposal. But none of them passed, as members voted largely along party lines to leave the financial changes intact. As the bill now heads to the House floor, here’s a look at how it would affect the balance sheet for college students.

There are currently a variety of federal loan and grant options available to students seeking financial aid. The GOP bill would offer just one type of loan, one type of grant, and one work-study program. In doing so, it scraps Teacher Education Assistance for College and Higher Education (TEACH) grants, which provide up to $4,000 per year to students who agree to teach at schools that serve low-income students upon graduation, as well as the Federal Supplemental Educational Opportunity Grant, need-based funding of up to $4,000 that’s provided through a combination of federal and institutional funds. More than 1.5 million students benefited from those grants in the 2015-2016 academic year.

The Pell grant program, which provides low-income students with up to $5,920 annually, would see significant administrative changes affecting its roughly 7.1 million recipients. Under the proposed legislation, grant money, which is currently given to students in a lump sum at the beginning of each term, would be disbursed in a biweekly or monthly “paycheck” plan at a school’s discretion. The shift could introduce uncertainty for students who depend on Pell money for upfront tuition and living costs at the beginning of a semester. The GOP plan also gives a $300 Pell “bonus” to students who complete a semester with a full-time course load, but that’s not an option for many low-income, part-time students, many of whom receive Pell funding.

Loans, unlike grants, require repayment, but much more loan funding is available to students, from the federal government and private lenders. The bill eliminates loans for needy students and limits how much federal money students can receive, likely forcing some students to seek out private loans with less generous repayment terms. It would scrap a program that offers loans to needy students and doesn’t charge interest while they’re in school. It would cap loans for graduate students at $150,000, an amount that would not cover the cost of many professional programs, like law and medical school. Parents of undergraduates would also face a new loan cap of $56,000 under the GOP plan, an amount that wouldn’t even cover two years of tuition at a private college.

The GOP bill strikes the Public Service Loan Forgiveness program, which forgives the remainder of students’ loans if they make 10 years of payments and work full-time for the government or a qualifying nonprofit organization. More than 550,000 students and graduates participate in the program. The move has received strong pushback from advocacy organizations representing professionals in law, medicine, agriculture, and the military, whose members have relied on the program to encourage college graduates to join their ranks. Almost two hundred of these groups have signed letters in support of the program, according to a spokesperson for Rep. Joe Courtney (D-Conn.), who sponsored a failed amendment to reinstate the plan during the committee’s markup of the bill.