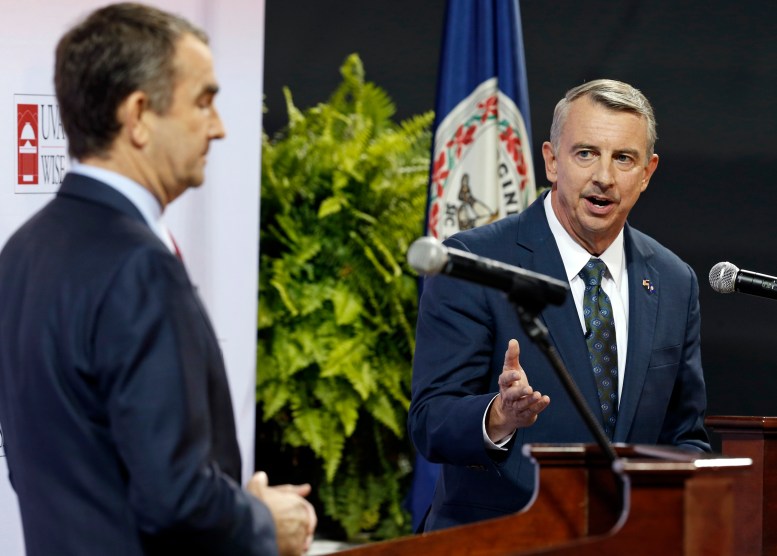 The candidates in the hotly contested Virginia governor’s race, Republican Ed Gillespie and Democrat Ralph Northam, are in the final stages of getting out the vote for Tuesday’s election. But Gillespie hasn’t always worked to boost voter participation in his state. Instead, he has tried to limit voting rights and supported policies that give Republicans a disproportionate electoral advantage.

Here are the three ways Gillespie wants to restrict voters’ access to the ballot and equal representation:

Ex-felon disenfranchisement: Before Gov. Terry McAuliffe took office in 2014, Virginia was one of four states that permanently barred ex-felons from voting. That policy dated back to Virginia’s 1902 Jim Crow constitution, which was passed to “eliminate the darkey as a political factor,” according to one segregationist Virginia senator. When McAuliffe became governor, it prevented 1 in 5 African Americans in the state from voting.

Last year, McAuliffe announced the automatic restoration of voting rights to 200,000 ex-offenders. Northam, his lieutenant governor, supported the action. The Virginia Supreme Court blocked McAuliffe’s policy, saying he lacked the authority under the state’s constitution to take the action en masse, so the governor individually restored the rights of 168,000 ex-felons. As my colleague Samantha Michaels reports, 42,000 of them have registered to vote and could be a key factor in Tuesday’s election.

Gillespie has sharply criticized the restoration of voting rights to ex-offenders, running a controversial TV ad claiming that Northam had made it easier for “violent felons and sex offenders” to serve on juries and buy guns. “Ralph Northam’s policy of automatic restoration of rights for unrepentant, unreformed, violent criminals is wrong,” Gillespie said. The Washington Post editorial board called the ad “poisonous to Virginia and the nation.”

This is an important issue in the governor’s race, since the next governor will decide whether to continue to aggressively restore voting rights to ex-offenders.

Gerrymandering: In 2010, Gillespie chaired the Republican State Leadership Committee, which raised $30 million from corporate interests like the US Chamber of Commerce, Koch Industries, and tobacco companies to support GOP state legislative candidates across the country. The effort was remarkably successful, giving Republicans full control of the government in 21 states, compared to just eight states for Democrats. Then the RSLC hired redistricting experts to help the newly empowered Republican state lawmakers redraw legislative and congressional maps after the 2010 census.

Democrats have challenged Virginia’s Republican-drawn maps for reducing the voting power of African Americans. In 2014, a federal court struck down one of the state’s congressional districts for “racial gerrymandering,” finding that Republicans unnecessarily packed thousands of black voters in an already-Democratic district in order to make the surrounding districts whiter and more Republican.

Virginia’s next governor will preside over the next round of redistricting after the 2020 census, making the Gillespie-Northam contest all the more important.

I won’t try to repeal our commonsense voter ID law protecting legal voters while trying to issue IDs to people who are here illegally.

On his campaign website, Northam says he supports repealing the state’s “unnecessary and restrictive voter ID law” and backs policies like same-day registration and early voting that would make it easier to vote.

When the law took effect in 2014, 200,000 voters in Virginia lacked a driver’s license, according to a survey from the Virginia Department of Motor Vehicles. During a federal trial last year challenging the law, an elderly African American Virginia resident born in Jim Crow North Carolina wept on the witness stand as she recounted how her ballot had not been counted in 2014 because she didn’t have a Virginia driver’s license or current state photo ID. (The law was upheld by the federal courts.)

For all of these reasons, voting rights organizations have rallied in opposition to Gillespie’s candidacy. Let America Vote, a nonprofit that supports pro-voting rights Democratic candidates, endorsed Northam. “Ed Gillespie has come out in favor of increased voter restrictions and proudly tried to gerrymander Virginia’s districts in 2010,” the group’s president, former Missouri secretary of state Jason Kander, wrote in an email to supporters. “If elected, he’ll give a greenlight to voter suppression.”