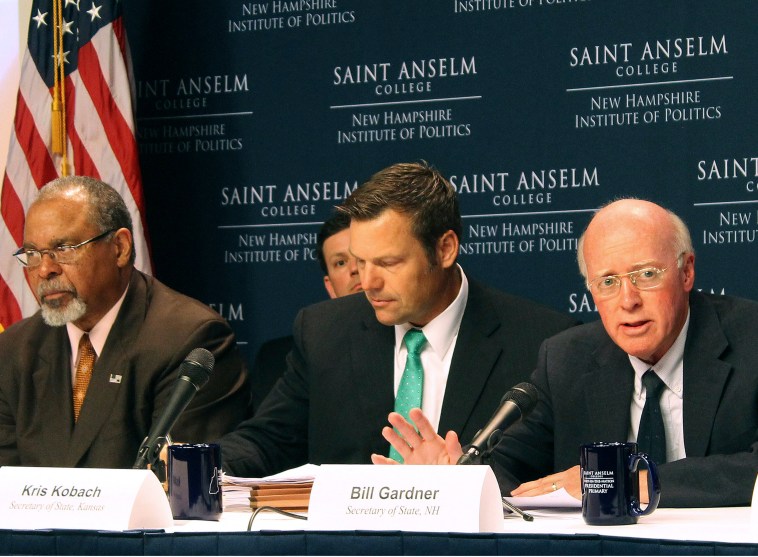 Fifteen lawsuits have been filed against President Donald Trump’s controversial “election integrity” commission in federal and state court for allegedly violating a wide range of transparency and privacy laws. The latest one comes from one of the commission’s own members.

Maine Secretary of State Matthew Dunlap, a Democrat whom Trump appointed to the commission in May, sued the commission in federal court on Thursday, alleging violations of the Federal Advisory Committee Act of 1972, which requires presidential advisory committees to operate in a bipartisan and transparent manner. The lawsuit says Dunlap is being deliberately kept in the dark about the commission’s work.

“The law and good conscience require Secretary Dunlap to participate meaningfully in the work of the Commission; however, despite diligent efforts to gain access, Secretary Dunlap has been, and continues to be, blocked from receiving Commission documents necessary to carry out his responsibilities,” the lawsuit states. “By obstructing certain commissioners’ access to information and failing to allow substantive participation of commissioners with balance in terms of points of view, the Commission and its staff have compromised the legitimacy of any findings that may emerge from this process.”

The commission was founded after Trump tweeted, with no evidence, that millions of people had voted illegally in the 2016 election. Critics fear that the commission will massively overstate the problem of voter fraud in order to recommend policies that make it harder to vote, such as requiring specific forms of ID to cast a ballot, erecting new barriers to registration, and forcing states to aggressively purge their voter rolls. The commission is run by officials with a long history of voter suppression, most notably its vice chair, Kansas Secretary of State Kris Kobach. Trump, Kobach, and Vice President Mike Pence, the commission’s chair, are named as defendants in the suit.

At the first meeting of the commission on July 19, Trump said the commission’s work “will be a very transparent process. It’s going to be very open for everybody to see.” Dunlap’s complaint says the opposite is happening and that the effort is hardly bipartisan. Before the commission was founded, Hans von Spakovsky of the Heritage Foundation, who would soon be named a commissioner, called on the administration to exclude Democrats and “mainstream Republican officials and/or academics” from the commission.

Though a few Democrats, including Dunlap, were eventually appointed, “the Commission’s superficial bipartisanship has been a façade,” the lawsuit states.

The suit cites a number of examples of how Dunlap and others have been excluded from the commission’s work. Kobach consulted with von Spakovsky and another hardline conservative commission member prior to requesting extensive voter data from all 50 states, but did not inform the full commission of the action. Dunlap alleges he was not consulted beforehand about the agenda of commission meetings or documents introduced at them. He also claims he’s been told that the commission’s work is “on hold” pending the outcome of litigation against the commission, but a right-wing group in Minnesota said it had been invited to speak at a commission meeting in December, which Dunlap is unaware of. When he asked commission staffer Andrew Kossack for “copies of any and all correspondence between Commission members,” Dunlap said “Kossack did not provide any documents or agree to provide any documents.”

The complaint provides a revealing window into how critics of the commission’s work, including members of the commission itself, are being sidelined by the likes of Kobach, who may be working in secret to shield the actions of the commission from the public. The commission is due to issue a report to the president next year, which voting rights advocates fear will recommend policies that would restrict access to the ballot.