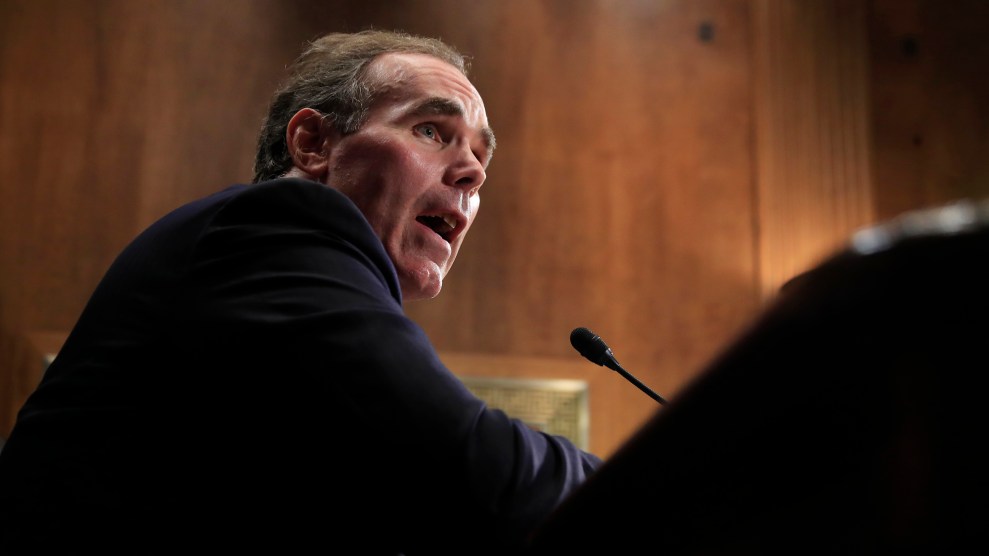 In his bio on the website of the influential law firm Jones Day, Eric Dreiband, who is awaiting confirmation to the top civil rights job in the Justice Department, lists some of the biggest cases he’s worked. Dreiband’s specialty is defending companies accused of discrimination, and the list includes high-profile clients such as tobacco giant R.J. Reynolds and CVS Pharmacy. At the bottom of the list is a case that’s gotten little attention, but one that maybe best highlights his success in fighting discrimination complaints—and why civil rights groups see him as the wrong person to lead the Justice Department’s Civil Rights Division.

From 2003 to 2005, Dreiband served as general counsel of the Equal Employment Opportunity Commission (EEOC), a government agency with the power to prosecute discrimination in employment. Dreiband has characterized his record at the EEOC as one of “aggressive enforcement,” where he oversaw hundreds of cases and forced companies to pay hundreds of millions of dollars in damages. After leaving government, Dreiband cashed in on his tenure at the EEOC to start working on behalf of companies fighting off discrimination suits brought by his former employer. He defended big corporations against the EEOC, including CVS Pharmacy in a case over its severance agreements and Bloomberg in a pregnancy discrimination case. Most famously, Dreiband was part of a team that defended the retailer Abercrombie & Fitch for refusing to hire a Muslim teen whose headscarf violated the company’s “look” policy. The case went all the way to the Supreme Court, where Abercrombie lost. Dreiband also took his expertise to Congress on several occasions, where he urged reforms that would reduce the EEOC’s authority.

In 2010, Dreiband was approached by another potential client facing a suit from the EEOC. This time, it wasn’t a private company, but the US Commission on International Religious Freedom, a little-known government agency that issues reports on religious discrimination abroad and makes policy recommendations based on its findings. Since its inception in 1998, critics had alleged that the commission was concerned mainly with anti-Christian discrimination and failed to address discrimination against other religious groups. Leonard Leo, a conservative Catholic, joined the commission in 2007 and became its chairman in 2009. Known as the most important figure in the conservative legal world, Leo is now executive vice president of the Federalist Society, which recommends judicial nominees to Republican presidents. Business Insider recently named him “the most powerful recruiter in the world” for his role in picking conservative Supreme Court justices during the past two Republican administrations.

In the spring of 2009, the commission hired a young woman named Safiya Ghori-Ahmad as a staff analyst for the South Asia region. Born in Arkansas, Ghori-Ahmad came to the job with a law degree, a master’s degree, fluency in Hindi and Urdu, and enthusiastic reviews from those who had interviewed her. But after accepting the job, it became clear that her Muslim faith, Indian heritage, and past employment at the Muslim Public Affairs Council, a group that advocates on behalf of American Muslims, were a problem for some of the commissioners.

According to a complaint Ghori-Ahmad filed in federal court three years later, several commissioners objected to her hiring. In an internal email, the complaint alleges, commissioner Nina Shea wrote that hiring a Muslim to analyze religious freedom in Pakistan would be like “hiring an IRA activist to research the UK twenty years ago.” Shea denied writing the email.

Enter Dreiband. The commission had been represented in the case by the General Services Administration, a federal agency, but in July 2010, Leo announced to the commissioners that Dreiband had been hired to take over, according to a former commissioner who asked not to be named. Dreiband sought to get the case dismissed, arguing that the commission was not subject to the workplace protections in the 1964 Civil Rights Act. In other words, a commission established to defend religious liberty had the right to discriminate based on religion.

The theory behind his argument was creative, if not exactly baseless. The commission was not an executive agency, he argued. But because Congress had failed to specifically mention that the commission would be subject to congressional rules, it was free from the civil rights laws that govern entities in the legislative branch. In other words, it wasn’t really subject to anyone’s rules.

This is why civil rights groups see him as the wrong person to lead the Justice Department’s Civil Rights Division.

“I think it was a very novel argument at the time to say, ‘We’re neither, and therefore she has no rights,'” says a former Justice Department official who asked not to be identified. “It just kind of belies common sense.” But Dreiband was effective. A few weeks later, the administrative judge dismissed the case.

Dreiband had won the battle for his client, but he may have cost it the war. Ghori-Ahmad’s case drew attention on Capitol Hill at the same time that the commission was awaiting reauthorization. When Sen. Richard Durbin (D-Ill.) learned about the case, he successfully pushed through reforms that would bring the commission under the nation’s civil rights laws. Moreover, he made sure that the laws applied retroactively, allowing Ghori-Ahmad’s case to go forward. Durbin’s reforms also targeted the commissioners who had fired her by imposing term limits and making them retroactive as well—effectively firing Leo and the rest of the commissioners.

President Donald Trump nominated Dreiband to lead the Civil Rights Division in June. Following Dreiband’s confirmation hearing in September, Durbin submitted several written questions to Dreiband about the case. “Can you explain how you came to represent the Commission, why you decided to take this case, and the rationale for the Commission’s defense?” he asked. “Why did the Commission, a governmental entity, retain private counsel in this case?” Neither Dreiband nor Leo responded to requests for comment.

Dreiband responded by reiterating that the commission hadn’t been covered by civil rights laws. He answered none of the other questions.