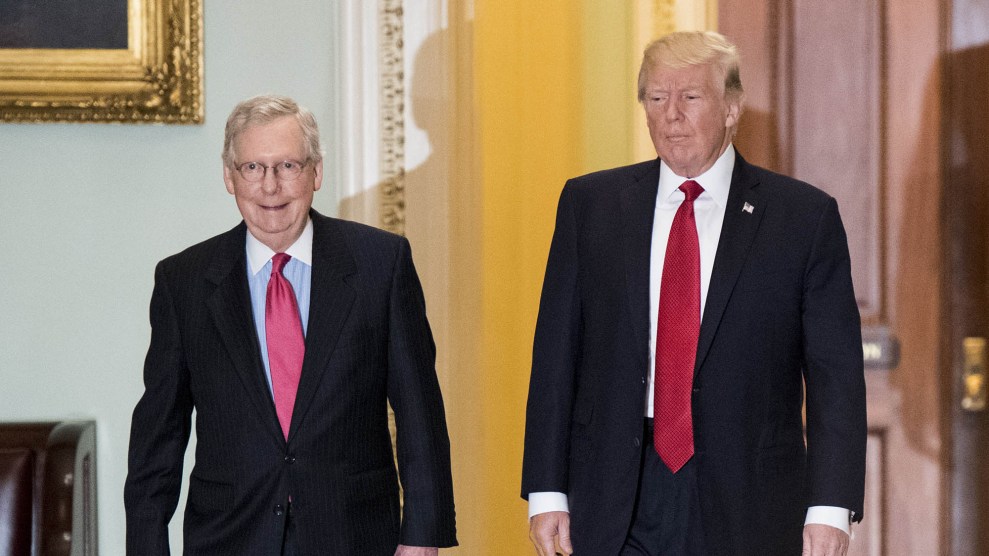 Senate Republicans decided on Tuesday to turn their tax bill into a health care bill. Senate Majority Leader Mitch McConnell (R-Ky.) announced that Republicans plan to include a repeal of Obamacare’s individual mandate in the Senate’s tax cut bill. If Republicans succeed in overturning the mandate, 13 million more people would lack health insurance, according to the Congressional Budget Office.

Republicans are planning to use a procedure known as reconciliation to pass their tax bill, which will allow them to get a bill out of the Senate with a simple majority vote rather than needing the usual 60 votes to overcome a filibuster. The rules of reconciliation prevent Republicans from actually taking the individual mandate off the books, so instead they intend to reduce the fine for people who don’t buy insurance down to zero.

Republicans are incorporating a repeal of the individual mandate into their tax bill for one reason: It saves money. The GOP needs to find ways to reduce the amount that the bill will add to the federal deficit, which is currently projected to be $1.49 trillion over the next decade. But repealing the mandate saves money only because far fewer people will have health insurance. The amount of money saved correlates directly to the number of people who forgo insurance, since fewer people would be taking advantage of the government’s premium subsidies and getting coverage through Medicaid.

While not as far-reaching as the health care bills Republicans considered earlier in the year, this new plan would be a massive shock to the country’s health insurance system. The CBO recently estimated that ending the individual mandate’s financial penalties would save the government $338 billion over the next 10 years. But an extra 4 million people would lack insurance in 2019, rising to 13 million by 2027. And insurance would be more expensive for the people who stick around to buy it on Obamacare’s exchanges, with premiums going up about 10 percent, according to the CBO.

Still, the cost savings would help one group of Americans. Fifty percent of the benefits from the proposed tax cuts in the bill would go to the top 5 percent of earners in 2027.