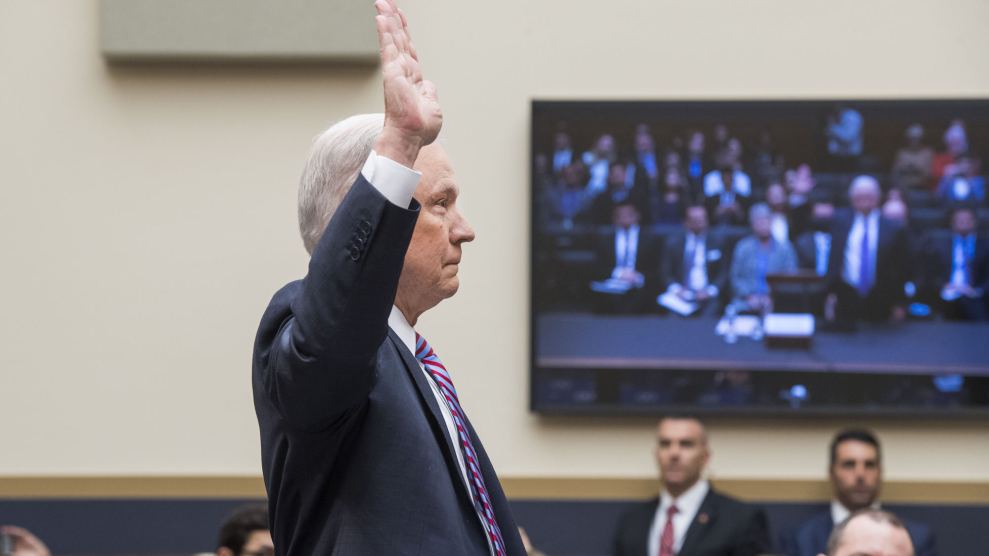 Attorney General Jeff Sessions said on Tuesday that he does not recall details of a March 2016 gathering where a junior campaign advisor pitched a plan to set up a meeting between Donald Trump and Russian President Vladimir Putin, but he’s pretty sure he rejected the idea. Sessions, who previously said he had no knowledge of Trump campaign contacts with Russia, said he recalled the gathering only after reading news reports about it.

In testimony before the House Judiciary Committee, Sessions continued to deny accusations that he committed perjury by claiming under oath in January that he had no contacts with Russians, though it was later revealed he had multiple meetings with the Russian Ambassador. Sessions also denies that he lied when he said under oath that he was not aware of any communications between the Trump campaign and Russia, despite attending at least two meetings where campaign advisers told him of their contacts with Russia.

“My answers have not changed. I have always told the truth,” Sessions told the committee. “I will not accept, and reject, accusations I have ever lied under oath. That is a lie.”

Sessions found himself under fire, as he has several times before, because information seeming to contradict his earlier testimony has since emerged. When speaking before the Senate Judiciary Committee on October 18, Sessions said he did not know of communications between Russians and Trump campaign officials. “I did not, and I’m not aware of anyone else that did, and I don’t believe it happened,” Sessions said under questioning by Sen. Al Franken (D-Minn.)

After that hearing, court records related to Special Counsel Robert Mueller’s investigation into the Trump campaign’s Russia links revealed that George Papadopolous, a former campaign foreign policy advisor, had pleaded guilty to lying to the FBI about his contacts with suspected Russian intelligence agents. A filing by Mueller’s office says that Papadopolous pitched Sessions, President Trump, and other campaign advisors on a plan to use contacts—with two individuals the FBI has said it suspects were Russian agents—to set up a meeting between Trump and Putin. In a November interview with the House Intelligence Committee, Carter Page, another Trump campaign foreign policy advisor, said he informed Sessions at a dinner for members of the Trump campaign foreign policy team of his plan to visit Moscow to deliver a speech.

Sessions said Tuesday that he had “no recollection” of the Papadopolous meeting, but after seeing news reports about it, he now remembers it dimly. After reading about the meeting, Sessions said, “I do now recall” it. He stated he has “no clear recollection of what [Papadopolous] said.” Nevertheless, Sesssions said: “I believe that I wanted make clear to him that he was not authorized to represent the campaign with the Russian government or any other foreign government.” Later in the hearing, Sessions offered a more specific recollection of the meeting: “I remember the pushback,” Sessions told Rep. Jamie Raskin (D-Md.) “I remember that he suggested an ability to negotiate with Russians or others and I thought he had no ability or it would not be appropriate for him to do so. And I was pretty clear about that he should not be pretending to represent [the campaign.]”

Papadopolous and Page’s Russia links are among the many contacts between Trump surrogates and aides and Russian government officials or intermediaries last year. Papadopolous continued to reach out to Russian officials and Trump campaign staffers in a bid to set up a high-level meeting sometime between March and August of 2016. Mueller’s office also says that a London-based professor, later identified as Joseph Misfud, told Papadopolous the Russians had obtained “thousands of emails” of “dirt” on Hillary Clinton. On Monday, The Atlantic reported the Donald Trump Jr., exchanged direct messages with Wikileaks, which published emails that US intelligence agencies say the Russians stole from the Clinton campaign and passed on to Wikileaks for distribution.

Sessions confirmed Tuesday that he directed federal prosecutors to evaluate calls by Republican lawmakers, including Judiciary Committee Bob Goodlatte (R-Va.), for the Justice Department to investigate various matters related to Hillary Clinton and consider if the issues “merit the appointment of a Special Counsel.” Republicans argue that Clinton, as secretary of state, improperly approved the sale of a uranium company with substantial holdings in the United States to a Russian firm. They also say the FBI was lax in its investigation of Clinton’s use of a private email server.

That consideration has alarmed Democrats who fear Sessions is reacting to public pressure by President Trump, who has complained the Justice Department has not adequately investigated Clinton and Justice Department actions under former President Obama. Democrats say the calls are part of an effort by Trump and his allies to distract from the ongoing investigations into his campaign’s ties to Russia.

Sessions on Tuesday, however, made statements that suggest the appointment of another special counsel is far from likely, pointing out that the law governing the appointment of a special counsel sets a high bar. The Justice Department must determine a criminal investigation is required and that the department itself cannot conduct the probe due to some conflict or other “extraordinary circumstances.”

Sessions pushed back Tuesday against Republicans who expressed frustration that he has not already named a special counsel. “It would take a factual basis that meets the standard for appointment of a special counsel,” Sessions told Rep. Jim Jordan (R-Ohio). After Jordan said “it sure looks like” Sessions has reason to make an appointment, the attorney general had a pithy response: “‘Looks like’ is not enough basis to appoint a special counsel.”