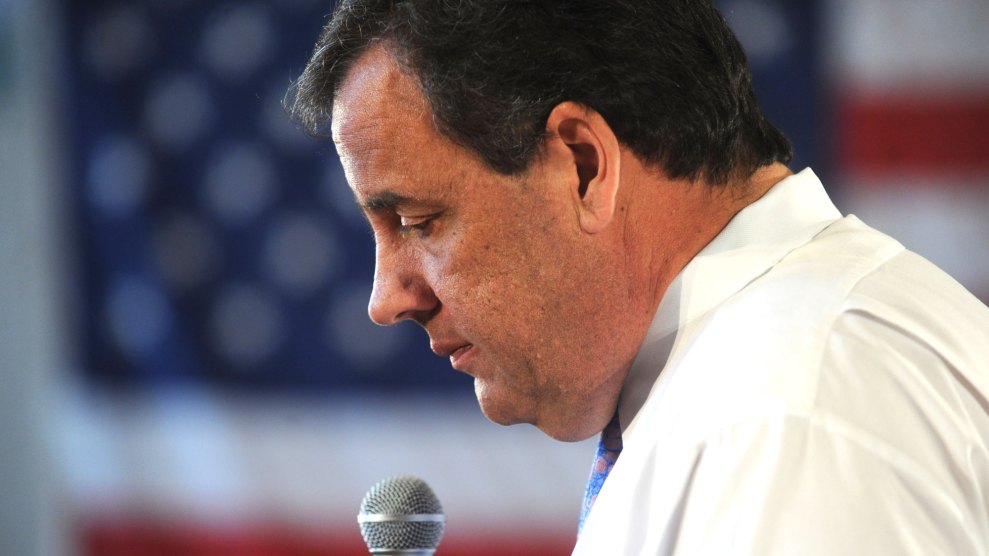 There was a time not so long ago when Chris Christie was going to be somebody. Toward the end of 2011, as Mitt Romney was working a bit too hard to fend off a succession of third-rate primary challengers—Herman Cain? Rick Santorum?—rumblings started among the conservative commentariat and donor classes. “A big man, for a big job,” crowed Weekly Standard editor Bill Kristol.

In the fashion of the old Whig party before the war, which trotted out a parade of generals to hold together a party that increasingly served no purpose, the establishment’s love of Christie reflected a nervous pragmatism about the party’s own incoherence. Christie, an ex-prosecutor who became a blue state governor in a decisive victory, seemed to exist in a coveted sweet spot. He could boost Republican economic policies appealing to the donor class, while shredding snowflake libs in a way that might satisfy a base that had very little to gain from Republican economic policies.

Christie had the first part down pat, and appeared to be quite good at the second, inasmuch as it entailed shouting at people conservatives didn’t like, such as public school teachers, and college students, and public school teachers. It might have been a warning sign that someone who’s most identifiable skill was being rude could so easily ascend the political ranks. But Republicans seemed to like it.

But Christie, then in his third year in as governor, never entered the 2012 primaries and his window closed. Or rather, his own missteps closed it. The next year, desperate to put up a big re-election win in the hope it might cement him as a front-runner three years hence, Christie’s office had taken to playing good-cop/bad-cop with local Democratic officeholders in New Jersey, offering tokens of appreciation (such as actual pieces of the World Trade Center) to mayors who endorsed him, and playing hardball with those who didn’t.

In the case of the Democratic mayor of Fort Lee, Christie’s top aides shut down the off-ramp to his town. There were traffic problems. Ambulances responding to urgent calls were delayed.* It was a big deal. But also cartoonishly petty! It was almost like something Mr. Burns would have done. Up until this summer, when the Newark Star-Ledger published aerial photos of his family lounging on a public beach shuttered by his own government shutdown, it was pretty much the perfect Chris Christie story.

But in the eyes of conservatives, his most unforgivable offense came months before Bridgegate, when New Jersey’s coast was leveled by Superstorm Sandy days before the 2012 election. Christie appealed to President Barack Obama for assistance, and they met on the Jersey shore and shook hands. In a healthier universe, it might have been his finest moment—an unusual display of non-partisan service in the homestretch of a contentious election—but he would never live down embracing Obama. “He was like a little child, Christie,” Donald Trump said of the governor’s ride on Marine One. “He was like a little boy.”

Republicans did, eventually, fall in love with Trump, another tough-talking Northeasterner who could make Democrats squeal. When Christie realized he wouldn’t be the 2016 nominee, his response was instructive: he, a former US Attorney, stuck his neck out for a Republican candidate who was proposing to throw his rival for the presidency in prison. At the Republican National Convention, Christie even led the chant.

His transition into a full throated Trump backer was not always easy. Sometimes Christie looked like he was stuck in a hostage video, or like he was staring into the abyss. But he had Trump’s back. Campaign aides surreptitiously filmed Christie picking up Trump’s McDonald’s order. He begged for the vice-presidency only to be blocked by Jared Kusher, the rich-kid son of a guy he put in prison a decade ago. Christie just kept going. A man who had styled himself as the patron saint of telling it like it is became a poster child for falling in line.

On Tuesday, New Jersey voters will pick a new governor. Barring a miracle for the GOP, polls show it will almost certainly be Democrat Phil Murphy, and not Christie’s second-in-command, Lt. Gov. Kim Guadagno. The fact that the race has never really been close is a reflection of both Christie—whose approval rating has dropped to 15 percent—and the current political environment.

Murphy’s likely win will receive a fraction of the attention paid to the governor’s race in Virginia, where Republican Ed Gillespie and Democratic Lt. Gov. Ralph Northam are locked in a close battle. (The likely Democratic takeover of the Washington state senate, which would leave the party in charge of the governor’s mansion and both branches of the legislature, will get even less attention.) A Gov. Murphy is certain to receive fewer headlines and Morning Joe invites than Christie over the next four to eight years.

But the outcome will affect roughly the same number of people as the race in Virginia. And unlike the much-maligned Northam, who satisfied no one by spending his final days defending a hypothetical ban on Virginia’s non-existent sanctuary cities, Murphy has had the space to articulate a platform that represents the moment. So while, yes, it’s the sort of thing he’d probably tell a student council candidate, it made some sense when former Vice President Joe Biden called the race in New Jersey “the single most important election” between now and 2020.

Murphy would be an unlikely populist icon. He was an executive at Goldman Sachs—as Guadagno’s ads took pains to point out—and subsequently an ambassador to Germany. His path to the nomination was essentially plowed for him by the state’s Democratic machine, which Murphy had seeded with $1.5 million before he launched his campaign. He looks a little like Michael Keaton.

And yet his platform would remake the state on a scale that Christie never could achieve. Murphy is proposing to raise the minimum wage to $15, legalize marijuana within 100 days, make community college free, raise taxes on millionaires and corporations, and create a state-run bank (something no other state but North Dakota has done). At a debate in October, he pledged to make New Jersey a “sanctuary state.” What’s more, he can expect to arrive in Trenton with large legislative majorities, meaning he’ll actually be in position to push his vision. Northam, in the most realistic scenario for Democrats, will spend four years burning through the ink on his veto pen. Christie promised to remake New Jersey. By governing in a way that left his opponents more powerful than they’ve been in years, he’ll have done just that.

Correction: The original version of this article incorrectly suggested the traffic had caused a death.