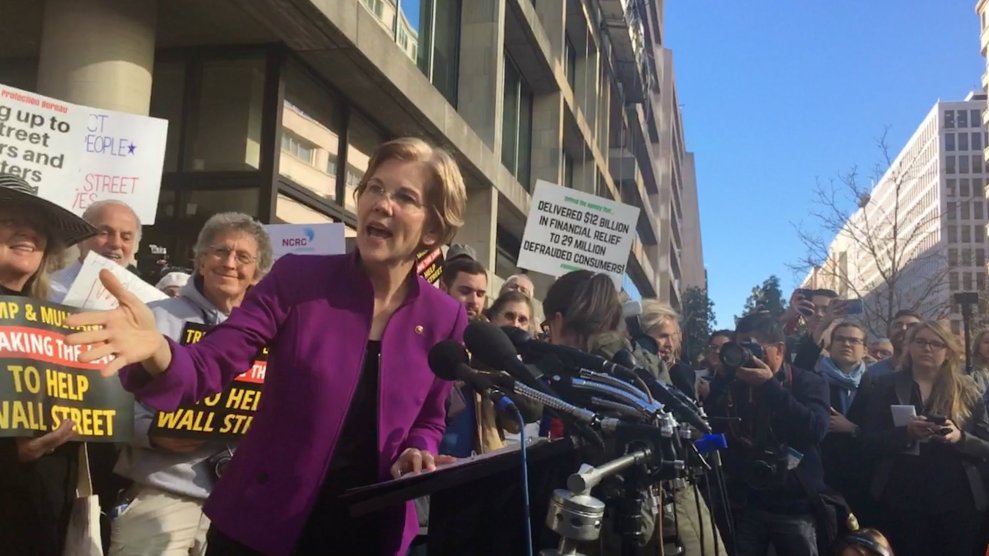 While two rival acting directors battled in court for legal control of the Consumer Financial Protection Bureau, several dozen protesters gathered outside the watchdog agency’s headquarters on Tuesday afternoon to oppose the one backed by President Donald Trump.

Mick Mulvaney, who was announced as interim head of the bureau by the White House over Thanksgiving weekend, is a Trump’s budget director, a former member of Congress, and a vocal critic of the agency. He once co-sponsored a bill to eliminate the bureau, which was created in the wake of the 2008 financial crisis.

“We don’t come bearing doughnuts,” joked Adam Green of the Progressive Change Campaign Committee, which organized the rally, referring to a widely-reported anecdote that Mulvaney brought doughnuts to the agency’s office on Monday. “But we come bearing a message…We will not let Donald Trump and Mick Mulvaney literally break the law to install themselves at the head of the top consumer watchdog [agency].”

The dispute was teed up when CFPB director Richard Cordray announced that he had appointed Leandra English, his chief of staff, as deputy director shortly before he stepped down on November 24. The 2010 Dodd-Frank law, which established the agency, calls for the deputy director to become interim head in the absence of a senate-confirmed director.

But the Trump administration has argued that the law’s succession provisions don’t override the Federal Vacancies Reform Act of 1998, which states the president “may direct an officer or employee of such Executive agency to perform the functions and duties of the vacant office temporarily in an acting capacity.” On Sunday, English filed a lawsuit against the president and Mulvaney in Washington, DC’s federal district court, claiming she is the rightful acting director.

Sen. Elizabeth Warren (D-Mass.), who spearheaded the effort to create the CFPB, headlined Tuesday’s demonstration, and called on the protesters to fight for the agency.

“No one should be cheated on credit cards or mortgages or student loans,” she told the crowd. “I believe everyone has to follow the law, and that includes Wall Street banks.”

“This isn’t about politics. This is about what’s fair,” says Elizabeth Warren protesting Trump’s pick to head the CFPB @MotherJones pic.twitter.com/b6kdUZ2YX0

People attending the rally told Mother Jones they are concerned that Mulvaney could destroy the agency from the inside. “Unregulated capitalism is a danger to democracy,” said retiree Abigail Woodward, who lives in the Washington region and learned about the protest in a Tuesday morning email. She worries a weakened CFPB will mean “power can cherrypick whether it wants to be held to the laws or not.”

Protest of Trump’s pick to head the Consumer Financial Protection Bureau who has indicated he doesn’t want the agency to exist @MotherJones pic.twitter.com/d4ZgcN1gxM

While the court initially ruled late on Tuesday in Mulvaney’s favor, appeals are likely. But the courts’ final decision may only settle who runs the agency on an interim basis. The president can eventually nominate and seek Senate approval for a permanent head, who would have a clearer mandate and more power to transform the bureau.

“If Donald Trump wants to install a Wall Street representative to run this agency, he’s got a way to do that unfortunately,” says Robert Weissman, president of Public Citizen, a consumer advocacy group. “If the Republicans in the Senate go along with that, we’re going to fight all the way. We’re going to have to get through a period where they try to undo all the good the agency has done.”

This post was updated shortly after publication to reflect the district court’s ruling.