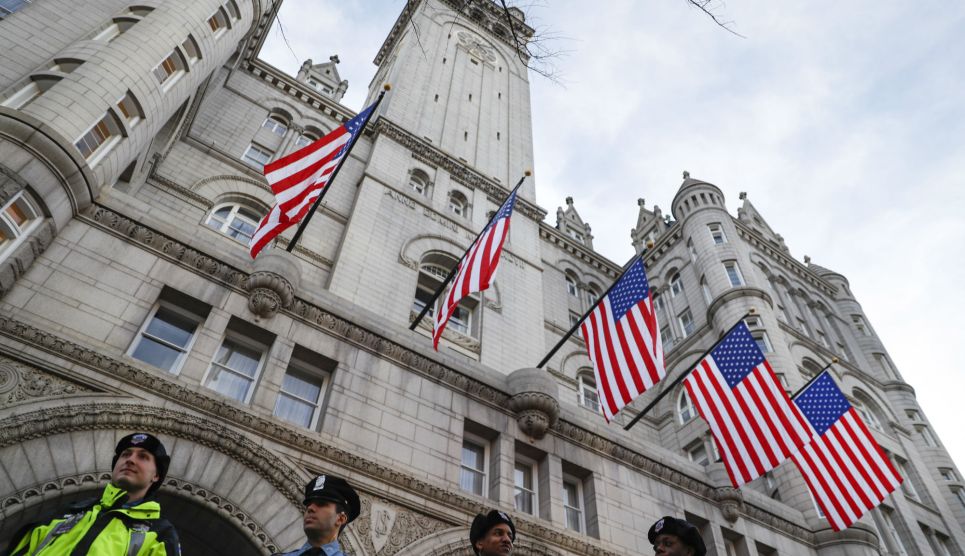 The Trump administration is violating federal law by refusing provide Congress with key information about the president’s Washington, DC, hotel, a group of Democratic lawmakers alleged in a lawsuit filed Thursday.

Since Inauguration Day, the administration has been stonewalling congressional watchdogs, refusing to turn over details about the operations of the Trump International Hotel, which is located in the Old Post Office building—an iconic DC landmark owned by the federal government and leased to the Trump Organization. Under terms of the lease, the hotel’s management has to provide financial data to the General Services Administration, the federal agency that acts as landlord for the hotel.

“This hotel is not just a building with Donald Trump’s name on it. It is a glaring symbol of the Trump Administration’s lack of accountability and a daily reminder of the refusal by Republicans in Congress to do their job.”

Critics have accused Trump of using his position as president to drum up business for the hotel—and of using it as a conduit through which foreign governments can line his pockets to curry favor. Democrats on the House oversight committee have been asking the GSA for records detailing the profitability of the hotel; payments to the hotel from foreign governments; and information about the GSA’s decision that it is acceptable for Donald Trump to continue to lease the hotel, even as he serves as president. A clause in the lease that Trump signed with the GSA, prior to running for president, prohibits any federal officials from benefitting from the deal. Shortly after Trump took office, the GSA announced it did not believe Trump’s presidency conflicted with the lease, but the agency has withheld details on how it reached that conclusion.

While congressional committees have subpoena power to force federal agencies to disclose documents and records, the subpoenas can’t be issued without the support of a majority of committee members. In practice, that means Republicans—who control Congress and the oversight committee—have been able to prevent Democrats from subpoenaing the hotel data.

But committee Democrats, led by Rep. Elijah Cummings (Md.), believe they’ve found another way to get the records—an obscure 1928 law known as the “Seven Member” statute. The law, which was designed to force transparency by government agencies even when partisan politics gets in the way, says that if any seven members of the oversight committee request documents from a federal agency, those documents must be turned over. The law applies to no other congressional committees, but since its passage during the Calvin Coolidge administration, it has been upheld by courts and used repeatedly.

In Thursday’s lawsuit, 17 committee Democrats say they have repeatedly requested the Trump hotel information citing the “Seven Member” statute and that the GSA has rebuffed them. By not releasing more information on the hotel’s operation, Cummings said in a statement on Thursday, the GSA is violating the law and stoking the perception of corruption.

“This hotel is not just a building with Donald Trump”s name on it,” Cummings said. “It is a glaring symbol of the Trump Administration’s lack of accountability and a daily reminder of the refusal by Republicans in Congress to do their job. This may be standard operating procedure in foreign countries—but not here. Not in America.”

A slew of other lawsuits have targeted the Trump administration over the president’s refusal to divest from his sprawling business empire before taking office. The most focus has been on lawsuits citing the Emoluments Clause—a provision in the Constitution that bars federal officeholders from taking payments from foreign governments. Those suits are working their way through the judicial system, but it’s unclear whether courts will decide that the plaintiffs have legal standing to sue and whether the Emoluments Clause, which was written to prevent European princes from bribing bureaucrats, applies in the modern age.

The reason congressional Democrats think Thursday’s suit may have a better chance of succeeding is that the “Seven Member” rule has worked before. In fact, as recently as January 3, just 17 days before Trump took office, the GSA provided the Oversight Committee with information on the hotel’s profitability and specifically cited the “Seven Member” law.

“Under the previous administration, this exact same agency—GSA—explicitly recognized our authority under this exact same statute—the Seven Member statute—and produced documents on this exact same issue—the Trump Hotel. But all that stopped on January 20,” Cummings said. “There is one thing, and one thing only, that has changed in this case—President Trump is now sitting in the Oval Office.”

A spokesman for the GSA declined to comment, saying the agency does not discuss ongoing litigation.