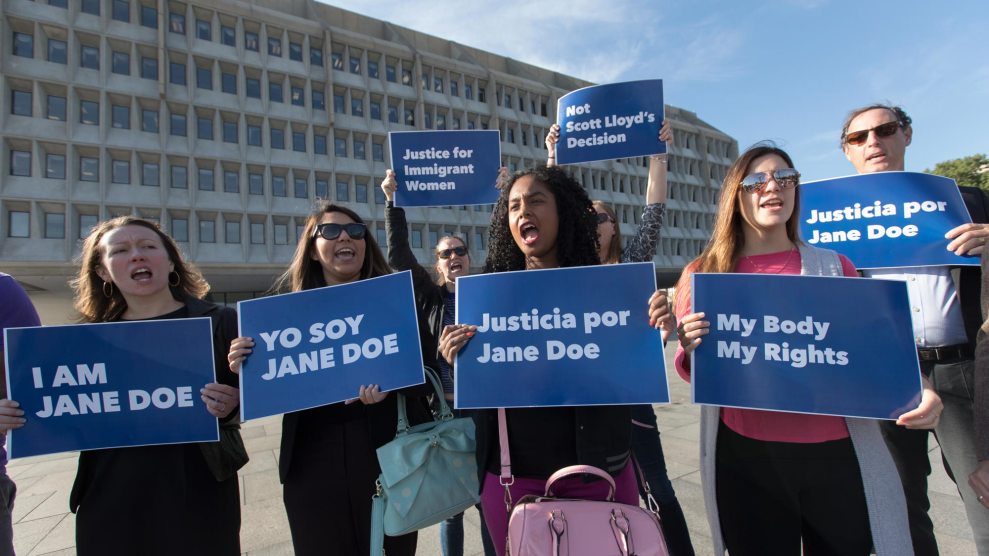 On Friday, the Department of Justice filed a petition with the Supreme Court asking them to toss out an earlier ruling in the case of Jane Doe—an undocumented 17-year-old who sought and obtained an abortion last month after a high-profile legal fight with the Trump administration—and to discipline her lawyers.

For a month beginning in late September, the Office of Refugee Resettlement (ORR), part of the Department of Health and Human Services (HHS), refused to allow Doe—who was being housed in a Texas refugee shelter after crossing into the country alone—to leave the shelter to obtain the abortion. They were opposed to facilitating the procedure even after Doe secured a state court order authorizing it, as well as private funding and transportation. The ACLU sued the government on behalf of Jane Doe, and her pregnancy progressed into the second trimester while the case wound through the courts. On October 24, an appeals court ordered the Trump administration to allow Doe to leave the federal refugee shelter to obtain her abortion and, on the morning of October 25, Doe terminated her pregnancy.

The DOJ’s filing on Friday alleges that Doe’s attorneys from the ACLU lied to the government about the timing of her abortion so as to avoid another court challenge.  They argue they had told Doe’s lawyers they planned to further appeal the October 24th ruling and had asked those lawyers to inform the government when Doe planned to have her procedure. They claim Doe’s lawyers “misled” the government into thinking the abortion would take place on October 26.

“Jane Doe’s attorneys scheduled the abortion for the early morning hours of October 25th, thereby thwarting Supreme Court review,” DOJ spokesman Devin O’Malley said in an emailed statement. “In light of that, the Justice Department believes the judgment under review should be vacated, and discipline may be warranted against Jane Doe’s attorneys.”

The ACLU notes that it was under no obligation to inform the Justice Department of the procedure, and that this Supreme Court filing is an effort by the government to save face “under criticism from anti-choice activists.”

“Having failed to seek an immediate stay when it could have, the Trump administration is now trying to deflect blame by suggesting that the ACLU failed to inform the government that Doe was going to the clinic for her abortion on the morning of October 25,” notes a release from the ACLU. “But the court order authorized an abortion, and government lawyers knew she could obtain an abortion immediately under the law.”