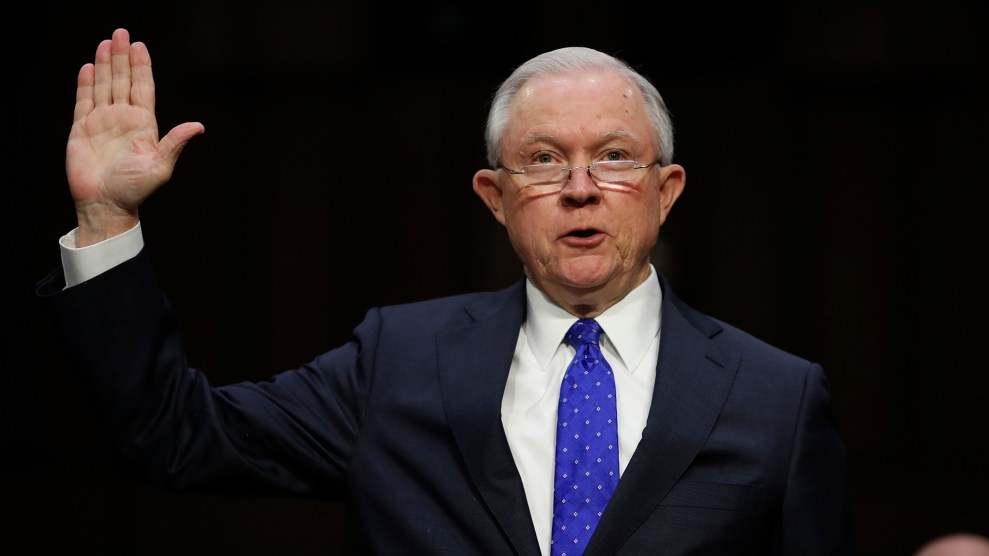 Attorney General Jeff Sessions is sworn in before the Senate Judiciary Committee on October 18.Carolyn Kaster/AP

When special counsel Robert Mueller announced two indictments and a guilty plea last week in his investigation into Russian interference in the 2016 election, the biggest loser outside of those actively facing federal prosecution might have been Attorney General Jeff Sessions. According to a “statement of offense” by George Papadopoulos, the Trump campaign national security adviser who pleaded guilty, Papadopoulos had announced in a March 2016 meeting with Donald Trump and Sessions that “he had connections that could help arrange a meeting between then-candidate Trump and President Putin.” Sessions, he said, shot down his proposal.

That doesn’t square with Sessions’ public statements—made under oath before the Senate—about the deepening Trump-Russia scandal. Nor does the revelation last week by another campaign foreign policy adviser, Carter Page, that he’d told Sessions of plans to visit Moscow to deliver a speech.

It now seems clear that there were at least three instances in which Sessions gave false or misleading statements to the Senate about his involvement in contacts with Russia. Sessions may simply have misremembered all of these events—or, if he intentionally misled the Senate, he may have committed perjury.

Here are the three moments in which Sessions appeared not to tell the truth to the Senate:

1/10/17: At Sessions’ confirmation hearing for his nomination to be attorney general, Sen. Al Franken (D-Minn.) asked Sessions a lengthy question about contacts between Trump campaign surrogates and Kremlin affiliates:

FRANKEN: CNN just published a story alleging that the intelligence community provided documents to the president-elect last week that included information that, quote, “Russian operatives claimed to have compromising personal and financial information about Mr. Trump.” These documents also allegedly say, quote, “There was a continuing exchange of information during the campaign between Trump’s surrogates and intermediaries for the Russian government.”

Now, again, I’m telling you this as it’s coming out, so you know. But if it’s true, it’s obviously extremely serious, and if there is any evidence that anyone affiliated with the Trump campaign communicated with the Russian government in the course of this campaign, what will you do?

SESSIONS: Sen. Franken, I’m not aware of any of those activities. I have been called a surrogate at a time or two in that campaign and I didn’t have—did not have communications with the Russians, and I’m unable to comment on it.

But Sessions did communicate with the Russians. As detailed by the Washington Post in March, Sessions twice met with Russian Ambassador Sergey Kislyak. (Later, a third meeting with Kislyak came to light.) Further, Sessions may not have been aware of an ongoing stream of communications between Russians and campaign surrogates, but it’s clear from the revelations by Papadopoulos and Page that he knew of at least a few instances —not to mention his own meetings with the Russian ambassador.

1/17/17: A week after his confirmation hearing, Sessions submitted responses to written questions from Sen. Patrick Leahy (D-Vt.) as part of the confirmation process in which he denied any communications with Russian officials about the campaign:

LEAHY: Several of the President-Elect’s nominees or senior advisers have Russian ties. Have you been in contact with anyone connected to any part of the Russian government about the 2016 election, either before or after election day?

This claim was likewise later contradicted by news of Sessions’ contacts with Kislyak. Sessions then claimed that his contacts with the Russian ambassador had come in his capacity as a senator and were therefore not “about the 2016 election.” But after a report that Kislyak had told superiors that the meetings addressed campaign-related topics, Sessions tweaked his answers. In October, he conceded under questioning that it was “possible” that Trump’s positions on issues of interest to Russia came up during the meetings. “It could have been in the meeting in my office or at the convention that some comment was made about what Trump’s positions were,” he said.

10/18/17: At a Senate Judiciary Committee hearing, Sessions made yet another dubious claim while defending his January statements under further questioning from Franken.

“It all arose from this question,” Sessions said. “When you—when it was charged that these documents allegedly say, quote, ‘There was a continuing exchange of information during the campaign between Trump’s surrogates,’…and I felt a need to respond. And I responded on the spot. We’d been six hours in the hearing, the end of the day. And I said, I’m not aware of those activities. And I wasn’t, and am not. I don’t believe they occurred.”

Sessions continued, “As a surrogate in the campaign, I didn’t have a continuing series—a continuing exchange of information.”

FRANKEN: You don’t believe that surrogates from the Trump campaign had communications with the Russians? Is that what you’re saying?

SESSIONS: I did not, and I’m not aware of anyone else that did, and I don’t believe it happened.

FRANKEN: And you don’t believe it now?

SESSIONS: I don’t believe it happened.

Shortly after this hearing, Mueller’s team released Papadopoulos’ statement of offense, which described his contacts with Russians and his proposal, at a meeting Sessions attended, to use them to set up a Trump-Putin meeting. On Tuesday, the House Intelligence Committee released a transcript of its interview with Page, in which he said he told Sessions, during a July dinner meeting of campaign’s foreign policy team, of his plans to visit Moscow.

The revelations undermine Sessions’ claims that he was unaware of ongoing contacts between the Trump campaign and Russia. The denials already seemed strange, given that the public has known for months about the meeting between top campaign officials and a Kremlin-connected lawyer at Trump Tower in June 2016.

A Justice Department spokesman declined to comment on the record about the apparent problems with Sessions’ public statements.

Last week, Franken sent a letter to Sessions demanding answers to detailed questions about his interactions with Papadopoulos and his testimony before Congress.

“Once again, developments in the ongoing investigation into Russian interference in the 2016 election have brought to light evidence that you failed to tell the truth about your interactions with Russian operatives during the campaign, as well as your awareness of Russian contacts by other members of the Trump campaign team,” Franken wrote. “I am deeply troubled that this newest revelation strongly suggests that the Senate—and the American public—cannot trust your word.”