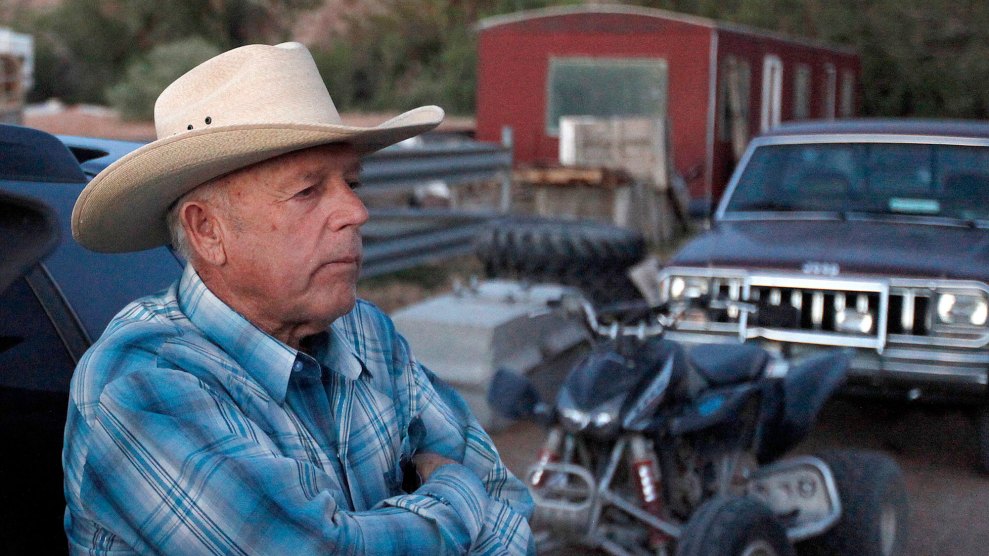 Cliven Bundy at his Nevada ranch in 2014.John Locher/Las Vegas Review-Journal via AP

In 2014, Nevada rancher Cliven Bundy became a right-wing folk hero after he led an armed standoff with federal law enforcement over the Bureau of Land Management’s attempt to seize his cattle. He’d been illegally grazing the cows on federal land for decades and, despite court orders, refusing to pay more than $1 million in overdue grazing fees and fines. Militia groups and tea party types have rallied around Bundy as he fights criminal charges related to the “Battle of Bunkerville.”

And now that President Donald Trump has pardoned Arizona sheriff Joe Arpaio, infamous for his extreme use of profiling to target undocumented immigrants, Bundy’s supporters see an opportunity for him as well. Bundy has been in jail since February 2016 and is set to stand trial on October 10 for his role in the ranch standoff, along with his sons Ryan and Ammon and four other defendants.

Longtime Trump confidant Roger Stone has been leading the charge for a pardon, as he did for Arpaio. In July, Stone was the featured attraction at a Las Vegas fundraiser for the Bundy defendants. He gave a speech calling on Trump to “review this case in the name of justice, in the name of mercy” and “pardon every member of the Bundy family.” Following the roadmap he used for Arpaio, he’s also raised the issue on the conspiracy-theory website InfoWars, and he repeated the pardon calls last month in another visit to Las Vegas.

It’s unclear how receptive Trump might be to the idea of a Bundy pardon. Trump was lukewarm on Bundy in 2014, when the ranch standoff was in the news. He told Fox News’ Sean Hannity at the time, “I like him, I like his spirit, his spunk and the people that are so loyal…I respect him.” But he expressed uneasiness with Bundy’s taking the law into his own hands and suggested that he “cut a deal” with the Obama administration to settle the cattle debate.

Now that Trump is president, he may have other ideas. Like his pardon of Arpaio, pardoning Bundy might play well with his base, particularly the white nationalists who aren’t bothered by—or even admire—Bundy’s 2014 comments that “the Negro” might have been better off under slavery. Most of the mainstream politicians who’d initially supported Bundy’s cause quickly dropped him after video of his diatribe surfaced. Even Hannity dropped Bundy’s cause.

“I like him, I like his spirit, his spunk and the people that are so loyal,” Trump said of Bundy.

But since becoming a presidential candidate and then president, Trump has been sympathetic to the Bundy faction, which backed him in the election. He chose a Bundy ranch conspirator, Gerald DeLemus, as a New Hampshire convention delegate and state co-chair of Veterans for Trump. DeLemus was unable to cast his vote for Trump at the Republican nominating convention because he was in jail on weapons and other charges from his role at the ranch standoff. Federal prosecutors described DeLemus as a “gunman and midlevel organizer” who’d overseen “Camp Liberty,” which housed armed militia members near the Bundy ranch for several weeks after the BLM’s attempt to round up Bundy’s cattle. DeLemus pleaded guilty to the charges and was later sentenced to seven years in prison.

Trump also picked a Bundy sympathizer to serve on his transition team for the Interior Department, which oversees the BLM. In the 1990s, Karen Budd-Falen, a Wyoming property rights lawyer and former Reagan-era Interior Department official, represented ranchers in Bunkersville, where Bundy lives, who sued the BLM for trying to get their cows off the habitat of an endangered desert tortoise.

In 2014, Budd-Falen told the Daily Caller that “the Cliven Bundy situation goes to show how American citizens react when a government has so expanded that it believes that the citizens are subservient to political power.” She went on, “This is simply a case of the government putting a rancher out of business because the rancher has to prove a negative—the burden is on the rancher while all deference goes to the federal government and the government only has to make allegations to eliminate a family, a business, a community, a way of life.” Over the summer, rumors surfaced that Trump intended to nominate Budd-Falen to head the BLM. Budd-Falen did not respond to a request for comment.

In one of his last official acts in office, President Barack Obama turned 300,000 acres around the Bundy ranch into the Gold Butte National Monument, a federally protected area managed by the BLM. After Trump took office, one of the federal monuments Interior Secretary Ryan Zinke recommended shrinking was Gold Butte.

Despite the Trump administration’s sympathy for Bundy, a pardon might be premature. Bundy hasn’t yet been convicted of a crime, and it’s not clear that he ever will be. The government has so far failed to convince a jury to convict anyone from the Bundy family on any criminal charges, either in Nevada or in Oregon, where Bundy’s son Ammon led the armed occupation of the Malheur National Wildlife Refuge in 2016.

Jurors have been open to the arguments made by the Bundys and their allies that they were simply defending their property rights, not terrorizing federal land managers. There have so far been three different Bundy-related trials. The first, a 2016 trial concerning the Oregon wildlife refuge occupation, brought acquittals of all seven defendants, including Ammon Bundy. The second, over the Nevada ranch standoff, resulted in a hung jury and two convictions of minor players who aren’t related to the Bundys. A third trial, in August, of four men charged with weapons offenses at the ranch, produced several not guilty verdicts. The jury deadlocked on the remaining charges and the judge declared a mistrial. Given the government’s track record so far, Cliven Bundy might not need a Trump pardon. The jury may do the job for him.