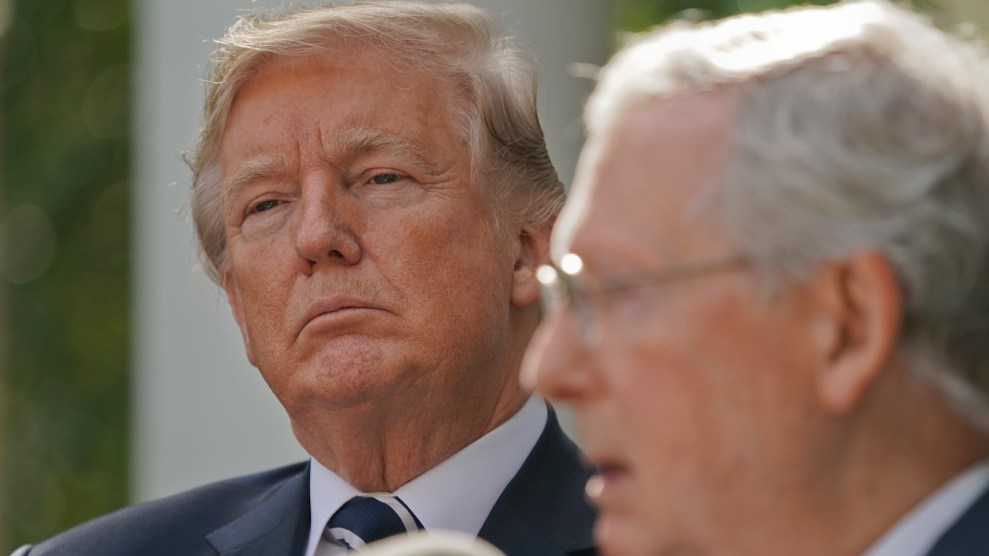 Last week, President Donald Trump told a group of truckers that his proposed corporate tax cut would give the average American family $4,000 per year. “That’s very exciting,” Trump said. On Monday, his Council of Economic Advisers issued a 14-page report that backed up Trump’s claim.

Unfortunately for those truckers—and every other American household—experts say the study’s findings are completely unrealistic.

The Council of Economic Advisers argues that cutting the corporate tax rate from 35 percent to 20 percent would drive corporate investment and raise demand for workers, which would in turn boost wages. As a result, the report concludes that the average American family would see its annual income jump by $3,000 to $7,000—up to an 11 percent increase.

But Leonard Burman, a fellow and co-founder of the nonpartisan Tax Policy Center (TPC), says that’s “utterly implausible.” His colleague, Steven Rosenthal, says Republicans are giving away $2 trillion in corporate tax cuts while the White House “speculates” that wages will rise in the long run. “Trickle-down economics on steroids,” he says. “Absolutely crazy.”

Jason Furman, a professor at Harvard’s Kennedy School of Government who led Barack Obama’s Council of Economic Advisers, says the “deeply flawed” study is well outside of mainstream economic thinking and “does not capture” how Trump’s plan would impact workers.

Joseph Rosenberg, who worked for the Federal Reserve’s Board of Governors before joining the TPC, calls the report’s findings a “very crude application of a couple selected papers.” He says the report implies that the wage benefits of Trump’s corporate tax cuts would be three to six times larger than the cut itself. That’s “well outside” the consensus range of how much corporate tax cuts benefit workers, Rosenberg says. The nonpartisan Congressional Budget Office estimates that 25 percent of corporate tax cuts go to workers. The Treasury Department found during the Obama administration that 18 percent do. (An Obama-era Treasury Department analysis supporting that number was recently removed from the department’s website.)

David Kamin, a law professor at New York University who worked on tax policy in the Obama administration, adds that the share of corporate tax cuts that go to workers are not evenly distributed. Instead, they disproportionately benefit executives and other workers with high salaries. The TPC estimates that less than 15 percent of a corporate tax cut would go to the bottom 60 percent of Americans, compared to a third for the top 1 percent.

Kamin adds that the study leads to the “absurd” conclusion that a complete elimination of corporate taxes would provide even greater benefits. That’s because the study doesn’t take into account how reduced government spending and increased debt can constrict economic growth, he says.

The study also assumes that Republicans’ proposed tax cut on foreign profits brought back to the United States by multinational corporations would be passed on to workers. Rosenberg says it’s more likely that they would go to shareholders. After a 2004 “tax holiday” on offshore corporate profits, the 15 companies that brought back the most money cut 21,000 American jobs while rewarding stockholders, according to a 2011 report from Senate Democrats. Many economists agree on the need to develop a system to fairly tax profits overseas, but Kamin says that it takes “numerous leaps in logic that simply don’t make a lot of sense” to conclude the repatriated earnings will go to typical workers.

But the main question raised by the study is how the Council of Economic Advisers is so sure that Republicans’ tax plan will benefit workers—when “the evidence linking the corporate rate to wages borders on nonexistent,” according to Furman.

Earlier this month, Kevin Hassett, the chair of the Council of Economic Advisers, spoke at the TPC. He said his hosts had behaved “irresponsibly” by analyzing Republicans’ plan before all the details were known. Now Hassett is making predictions based on the same numbers.

“As much as they said it was completely irresponsible and impractical for us to analyze the plan,” Rosenberg says, “I think it’s interesting that they’re willing to come out with very specific estimates of how their plan would affect wages.”