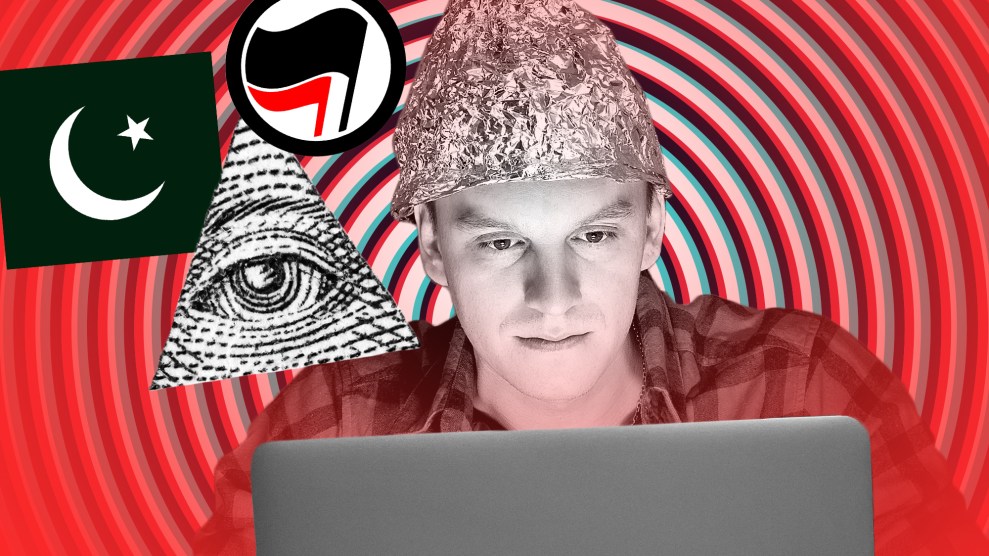 Which of the following groups does Stephen Paddock, the 64-year-old gunman responsible for the Las Vegas massacre, belong to, according to recent articles promoted by Republican pundits and Trump-affiliates?

d) All of the above

If you chose “All of the above,” you’re correct.

The shooting that left 58 dead and hundreds wounded, according to a spate of recent articles promoted widely on Facebook and Twitter, must be the handiwork of a vast lefty-Antifa-Muslim-jihadist-Illuminati conspiracy—and the whole “rancid story,” as the Conservative columnist Wayne Allyn Root recently put it, is being covered up by the FBI and the Las Vegas Metropolitan Police.

Before the police had even identified the shooter, Root, an occasional contributor to Breitbart News who used to open for Donald Trump at his Las Vegas campaign rallies, tweeted to his 110,000 followers that Las Vegas was in the midst of a “coordinated Muslim terror attack.” He soon added, “Just what I’ve warned of. Biggest threat to this country is Islamic terror, not police abuse.”

“This thing was nothing more than a strategically located blood sacrifice ritual.”

An array of conspiracy theories followed in the hours and days after the attack. Sheila Zilinski, who runs the website Weekend Vigilante, later “revealed” that the massacre was orchestrated by the “deep state” Illuminati—a secret society some believe rule the world. In a YouTube video, she declared, “Folks, this whole thing in Las Vegas. This killing field in front of this sphinx, this pyramid, this obelisk, this is no coincidence…This thing was nothing more than a strategically located blood sacrifice ritual, a death ritual across from a pyramid.”

Alex Jones, the host of Infowars, first doubled down on the Antifa claim, saying that the FBI “found Antifa information in the room and photos of the women in the Middle East…There was Antifa crap everywhere,” before switching—or, blending—narratives by inviting right-wing Internet personality Laura Loomer to his show to hear her theories linking Paddock to ISIS. Loomer is an acolyte of the conservative sting artist James O’keefe who once disrupted a production of “Julius Caeser” in New York by shouting, “You guys are ISIS!” Now, branding herself an investigative journalist, Loomer told Infowars, “I think that this guy is a hardcore leftist with Antifa connections who became radicalized through ISIS.” She said, “You see a lot of these leftists who are embracing Islam.”

Jones then speculated that the attack could have been “a set up” staged by “deep state” agents in order to push gun control. The shooting, he believed, could lead the nation on a path toward civil war.

Other conspiracy theories have suggested that the MGM Resorts International is destroying evidence of the crime, that there was more than one shooter, or that the shooting might have been connected to O.J. Simpson’s release from prison.

The most pervasive theory ties Paddock to ISIS, and it is reaching more mainstream audiences. An article that ran on the Gateway Pundit, a right-wing blog that already misidentified the shooter as Geary Danley, the ex-husband of Paddock’s girlfriend, cited a Twitter account to claim that ISIS has a video of Paddock pledging allegiance to the Islamic State. It also states that terrorism expert Rukmini Callimachi, who covers ISIS for the New York Times, “believes Las Vegas gunman Stephen Paddock may have been a jihadist.”

“Conspiracy theorists have repeatedly misquoted me as saying that ISIS was behind the Vegas attack,” says Callimachi. “To date, zero evidence of an ISIS link has emerged. I am talking both to sources in law enforcement and to US officials in Iraq who are tracking the terror group closely. They have found nothing suggesting that Paddock either interacted with members of ISIS, or was inspired by them—and certainly no evidence that he converted.”

“Conspiracy theorists have repeatedly misquoted me as saying that ISIS was behind the Vegas attack.”

On Twitter, Callimachi took the Gateway Pundit to task for what she called “lazy journalism.” The article suggests that an ISIS or ISIS-linked account “is promising a video proving Vegas shooter pledged allegiance,” she wrote. “This is not an ISIS account. How do I know? Zoom in on the profile picture.” The profile picture is the flag of Saudi Arabia—ISIS forbids flying any flag other than its own, and considers Saudi Arabia an enemy. “So unless it’s an ISIS account that’s really trying to be under deep cover…” she jokes.

Of course, whenever there’s a mass shooting or a terrorist incident, there are always conspiracy theories—queue the never-ending babble of JFK or 9/11 truthers. But what’s different this time is that, in our current fact-averse political moment, even those with links to the White House are promoting them and inflaming their enormous fanbases with politicized propaganda.

“These mistakes arise from both ignorance and arrogance,” says Amaranth Amarasingam, a senior research fellow at the Institute for Strategic Dialogue and a fellow at the George Washington University’s Program on Extremism. “Ignorance because these jihadist movements and the culture of jihadism actually takes some time to understand, and some of us have been studying it for years. Arrogance because people don’t recognize this and assume that some flag with Arabic writing on it is probably ISIS and run with it. Of course, this is me assuming that they actually are honest and considered reporters who care about accuracy, as opposed to retweets, which is not always clear.”

It isn’t so much that there’s no possibility of Stephen Paddock having been influenced by ISIS, allow Callimachi and Amarasingam, it’s that for the time being, there is zero evidence to support it, and Paddock would be an extremely unlikely candidate: At 64-years-old, he would be “not just an aberration, but literally the oldest recruit” in the United States, says Callimachi.

“Vegas law enforcement has conducted dozens of interviews with everyone close to him, and there has been no mention of any conversion to Islam, no mention of change in behavior and so on,” says Amarasingam.

Since the conspiracy has spread, Callimachi says she has been inundated with messages from well meaning people who are horrified at what happened and just want answers. “They’ll send me a DM saying, ‘Have you seen this?’ And they’re sending me Infowars, or something they’ve seen on Facebook. These are not malicious people; they’re trying to understand. Each time I’m saying, ‘There’s no evidence of that.'”

“The authors here are lighting fuses and they’re supposed to lead back to some secret, explosive connection.”

According to Adam Klein, who teaches courses on propaganda at Pace University, there are three main factors that breathe life into conspiracy theories. The absence of a clear motive, as is the case with the Las Vegas massacre, creates a vacuum that conspiracy theorists are able to fill, he says. (It hasn’t helped that the official timeline of events has now changed multiple times.) And it’s made easier when attacks are politicized, which, Klein points out, happens on both the left and the right. “The authors here are lighting fuses and they’re supposed to lead back to some secret, explosive connection: ‘Oh, this is all about gun control at the end of the day.’ Or, ‘This is all about the anti-fascists’—this provides a great justification for why the Antifa movement is so dangerous. Or the other narrative, that the FBI is trying to hide proof that ISIS is spreading and Paddock is the next example of that. That can all fall under the category of political score keeping and people trying to prove that this is part of a left wing conspiracy.”

Klein says the biggest factor is technology. “The Internet itself provides kind of an x-factor because, yes it’s a place a lot of false information forms, but it also coalesces with trusted sources and trusted information,” he says. Conspiracies travel from fringe websites to political blogs and on to Twitter and Reddit, “which act as incubators, where they allow some of these conspiracies to grow through hashtags, and they graduate onto a mainstream website, a news channel, or a politician who repeats these narratives.”

With the Las Vegas massacre, Klein says we’re still at the “Infowars stage,” but some mainstream figures, like Ann Coulter, are beginning to bite. The media has been “strangely reluctant” to pursue details on gunman Stephen Paddock, she said on Fox News Insider. Tomi Lahren, a conservative political commentator at Fox News, tweeted to her nearly one million followers, “It’s been over a week. There’s no way it takes this long to get answers. Something is off. I assure you, we won’t forget. #lasvegasmassacre”

“I investigate and predict based on my gut instincts and common sense only.”

What people consider to be reputable sources these days, moreover, has morphed. Infowars claims an audience of five million, and President Trump once praised its barking and often shirtless host Alex Jones for his “amazing” reputation. The Gateway Pundit, which has a mixed batting average for accuracy, was reportedly encouraged by President Trump’s team to send a correspondent to the White House, which it did, and its publisher, Jim Hoft—who wrote the article misrepresenting Rukmini Callimachi’s work—has close ties to former White House chief strategist Steve Bannon. And those on the so-called fringe, people like Laura Loomer, command massive audiences; she reaches nearly 90,000 followers on Twitter.

Meanwhile, Loomer continues her attempt to expose an alleged cover-up in Las Vegas. On Monday she posted a picture of herself at a memorial near Mandalay Bay, and stated, “I am doing this for them. They didn’t ask for this, and I’m not going to let these 58 victims be used in an @FBI misinformation campaign.” Wayne Allyn Root, despite falsely reporting that there were multiple shooters, that shots were fired at seven landmark Las Vegas locations (which he later admitted was false), and that what unfolded was clearly, to him, a “coordinated Muslim terrorist attack” despite no evidence to support it, similarly continues his crusade. On his radio show “WAR Now” on Tuesday, Root lamented that the leadership of the FBI and other law enforcement agencies are “all politicized, filled with government employee democrats who are out to protect Muslims at all costs.” (This was after voicing disdain for “experts” and declaring, “I investigate and predict based on my gut instincts and common sense only.”)

Conspiracy theorists don’t have to do much to benefit from their antics, says Klein. “They win simply by injecting doubt into the system, not by changing people’s minds. Doubt by itself is enough to distort the conversation, create discord around very important discussions that we should be having. If we’re talking about conspiracies instead of talking about gun control or mental illness or whatever factor that is a legitimate debate to have around this, then they’re winning. It doesn’t take more than that.”