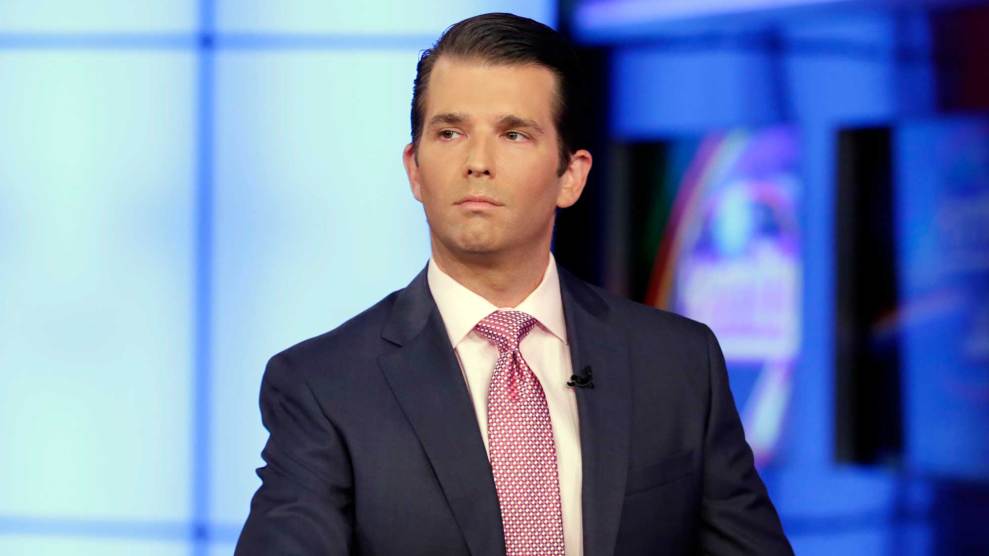 The Senate intelligence committee, as part of its ongoing investigation of the Trump-Russia scandal, has completed interviews with several key participants in the June 9, 2016 Trump Tower meeting between a Russian lawyer and members of Trump’s inner circle. Yet so far it has not questioned Donald Trump Jr., who organized the gathering, hoping to obtain dirt on Hillary Clinton as part of what he was told was a secret Russian government effort to help Donald Trump win the White House. This suggests the committee’s investigators have been looking to gather as much information as possible before zeroing in on the president’s son.

Committee staff last week interviewed Ike Kaveladze, one of the meeting’s eight participants, according to sources familiar with the investigation. Kaveladze is a US-based employee of Aras Agalarov, the Russian construction magnate who with his son Emin, an aspiring pop singer, helped arrange the Trump Tower meeting. The Agalarovs partnered with Donald Trump for the 2013 Miss Universe contest held in Moscow and subsequently teamed up with Trump and his company to develop a Trump Tower project in Moscow. (That project ended up stalling.) Intelligence committee aides also recently interviewed Rinat Akhmetshin, a Russian-American lobbyist based in Washington, DC. Akhmetshin attended the Trump Tower meeting with his colleague Natalia Veselnitskaya, a Russian attorney with ties to the Kremlin who has been lobbying in the United States against a law imposing sanctions on certain Russians for being involved in human rights abuses.

Senate intelligence committee chairman Richard Burr (R-N.C.) suggested at a news conference earlier this month that the panel had nearly completed investigating several aspects of the Russia scandal. Those include the Trump campaign’s softening of a Republican Party platform plank related to Russia’s incursion into Ukraine and a April 2016 meeting at Washington’s Mayflower Hotel where then-Sen. Jeff Sessions (R-Ala.) spoke with Russian Ambassador Sergey Kislyak. But Burr did not mention the Trump Tower meeting.

The sequencing of the panel’s interviews regarding the Trump Tower meeting is notable and indicates the panel is proceeding differently than the Senate judiciary committee. The judiciary committee nabbed the first interview with Trump Jr. last month, but the panel’s Republican members treated the president’s eldest son deferentially. The committee’s majority staff allowed Trump to attend the session without being seen or photographed by the media. They also questioned him before speaking to other attendees of the Trump Tower meeting. Investigators typically prefer to interview their main investigative targets last. That makes it easier for the investigators to catch inaccurate claims by the target.

The president’s son helped arrange the Trump Tower meeting in a series of emails he made public as the New York Times was preparing to publish them. In those messages, Rob Goldstone, a publicist who represents Emin Agalarov, told Trump Jr. that a Russian lawyer—Veselnitskaya—was prepared to deliver derogatory information on Clinton. Goldstone suggested the information was provided by at top Russian prosecutor who is an ally of Russian President Vladmir Putin as “part of Russia and its government’s support for” Trump. The committee has not interviewed Veselnitskaya, who is out of US reach in Russia.

Akhmetshin, a naturalized US citizen, has worked as a Washington lobbyist for clients in former Soviet republics. When he attended the Trump Tower meeting with Veselnitskaya, both were working on behalf of Denis Katsyv, a wealthy Russian whose company, Prevezon Holdings Limited, was accused by the Justice Department of fraud and money laundering in a civil suit. Veselnitskaya served as the company’s lawyer in that case, which was settled this year. She also worked with Akhmetshin to lobby against the Magnitsky Act, a 2012 law sanctioning Russians accused of human rights abuses. In addition, Akhmetshin testified before a Washington D.C. grand jury in August as part of special counsel Robert Mueller’s investigation. Akhmetshin and his attorney, Michael Tremonte, did not respond to requests for comment.

Kaveladze reportedly attended the Trump Tower meeting as a representative of the Agalarovs, for whom he has worked for decades in the United States. In 2000, the Senate’s Permanent Subcommittee on Investigations investigated Kaveladze for participating in what it called a massive money laundering scheme in which billions of dollars passed through accounts that he opened in Delaware. Kaveladze was never charged with any crime related to the alleged scheme. His lawyer, Scott Balber, who also represents Aras and Emin Agalarov, said Kaveladze “did not engage in any money laundering.” Balber said Kaveladze was merely connecting “Russian individuals and entities with US financial institutions” for small fees. Balber said that Kaveladze attended the Trump Tower meeting as a translator for Veselnitksaya, who speaks limited English, though she also brought a separate translator with her.

The Senate intelligence committee has also interviewed Jared Kushner, President Trump’s son-in-law, and Paul Manafort, the former Trump campaign chairman. Kushner and Manafort attended the meeting with Trump Jr. The committee cut a deal with lawyers for Manafort—he has since hired new attorneys—under which Manafort agreed to to the interview on the condition he would only answer questions about the Trump Tower meeting, according to people familiar with the arrangement. Manafort also handed over notes he took at the meeting.