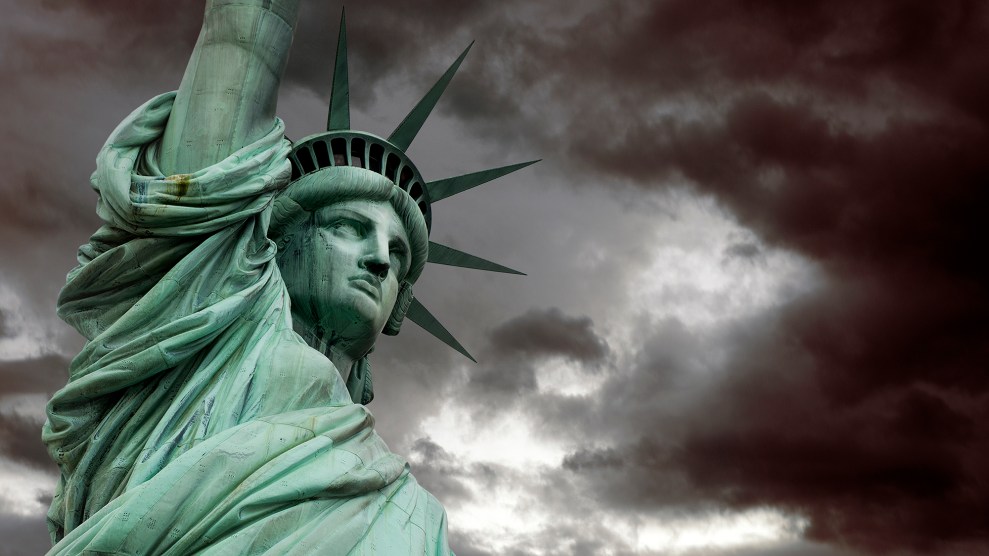 On a Saturday morning in late September, Patrick Bush was going door to door in an apartment complex in the Queens neighborhood of Woodside, with an iPhone and a warning.

Bush, a real-estate appraiser from Astoria, is a volunteer for Alexandria Ocasio-Cortez, a 27-year-old Democratic candidate for Congress in New York’s 14th District who is challenging the Democratic incumbent Rep. Joe Crowley in next summer’s congressional primary. Bush, like Ocasio-Cortez, was a supporter of Vermont Sen. Bernie Sanders during last year’s Democratic presidential primary, and like Ocasio-Cortez and many other Sanders supporters in New York, he spent a lot of time asking people to vote in an election he himself was sitting out. They had been purged from the rolls, or had neglected to change their party registration from independent to Democratic by the deadline—which, it turned out, had come and gone 193 days before last year’s presidential primary. (The deadline to register for first-time voters was much later—25 days before the primary.)

New York is a very Democratic state with a decidedly un-democratic set of voting laws.

So now, Bush and the campaign were trying to avoid a repeat. In a purple Ocasio-Cortez for Congress T-shirt and a light denim jacket, Bush was methodically working his way through a list of unaffiliated voters in one 80-unit brick apartment building, a typically Queens mix of Central American, South Asian, and African American residents, and informing them of a deadline most were unaware of. At his third door, an elderly Nepalese-American man opened and Bush explained why he was there. The man asked when he’d have to re-register by. October 13th, Bush said. This October 13th. Before the candidate field or even the primary date itself has been set. New York’s congressional primary elections won’t be held until next summer, which means voters are forced to square away their paperwork over half a year before an election most of them have no idea is even happening. They settled into the living room, and Bush helped the voter plug his information into an iPhone app that allows New Yorkers to update their registration online.

Ocasio-Cortez faces long odds against Crowley, the fourth most-powerful Democrat in the House. But in her campaign she is zeroing in on one of the state party’s weakest issues: New York is a very Democratic state with a decidedly undemocratic set of voting laws. Unlike Oregon, you can’t vote by mail; unlike California, you can’t register on Election Day.  Some of Bush’s fellow canvassers for Ocasio-Cortez were unable to vote last April after being caught up in a voter purge that removed 220,000 voters from the rolls in New York City alone. In some cases, the Queens Board of Elections relied on Ancestry.com to determine whether or not a voter on its list was deceased, prompting a lawsuit against the city by Eric Schneiderman, the state’s attorney general.

The reasons for New York’s voting laws are different than the racially targeted statutes and purges in places like Texas or Wisconsin, but the effect on the democratic process is nonetheless disruptive. At the time of its election last April, New York had the second-lowest turnout of any state primary in the United States last year (behind only Louisiana), and nothing seems to have changed since; in September’s Democratic municipal elections in New York City, turnout was 14 percent.

When Sanders supporters complained about New York’s voter registration law during the primary, long-time Democrats, whose patience with the candidate’s insurgency was already wearing thin, had little sympathy for voters who had forsaken their party to begin with. It is understandable that Democrats believe that Democratic candidates should be chosen by Democrats, as is the case in other states with considerably less restrictive re-registration deadlines, but that’s not what the New York system is designed to do—instead it tends to squeeze Democrats out. (Sometimes even the children of candidates miss the cut; Eric and Ivanka Trump were unable to vote for their father in last year’s primary because they had neglected to re-register as Republicans in time.)

Since last year’s primary, there have been efforts to change this. Last spring, a group of state legislators introduced legislation that would have moved up the deadline to change party registration before a primary, while still keeping the primary closed to people who didn’t agree to join the party. New York City Mayor Bill de Blasio, a progressive who was elected four years ago with a lot of help from the pseudo-third-party Working Families Party, urged the state legislature to pass it.

But that legislation went nowhere in Albany. Incumbent legislators, most of whom are in safely Democratic or Republican districts, have little incentive to shake up the way their elections are waged—it would be like asking them to cut their own pay. Ironically restrictions on party loyalties do not apply as strictly to the candidates themselves. Although Democrats dominate New York politics, Republicans currently control the state senate, because eight Democratic state senators, mostly from New York City, broke with their party to form a separate power-sharing agreement. De-facto Republicans can run and win in city primaries, but de-facto Democrats can’t vote for them.

So for the time being, it’s candidates like Ocasio-Cortez, an early childhood education specialist who works at a restaurant near Union Square to make ends meet, who are beating a lonely drum against the system. “People think that New York is supposed to be a progressive state, but we have some of the highest amounts of voter suppression in the country,” she says. But as steep as her task is, by even contesting the race at all, Ocasio-Cortez has done something unusual in New York politics.

In addition to shutting out voters from primaries, New York’s laws also makes it easy for party leaders to skip primaries and special elections entirely and pick candidates themselves. If a politician waits until after an election to do step down, New York law allows them to take advantage of an appointment loophole to literally appoint their own successors without even a special election. That’s how nearly a third of elected officials in Albany, and some members of Congress got their current jobs. One Queens politician appointed in such a fashion, Ocasio-Cortez notes, managed to hold his seat for 10 terms while only once competing in a serious Democratic primary: Joe Crowley.