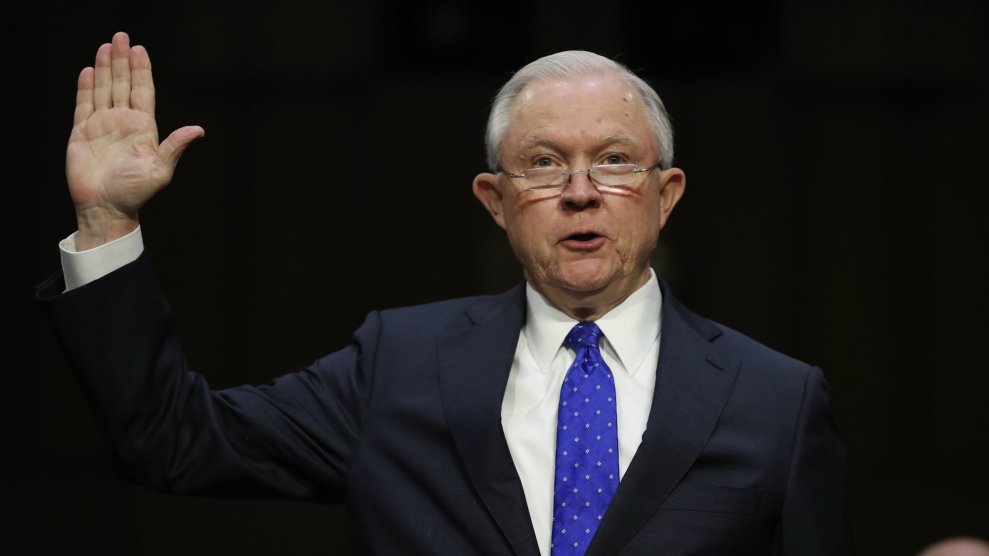 Attorney General Jeff Sessions on Wednesday offered a revised account of his contacts with Russians during the 2016 campaign. During his confirmation hearing in January, Sessions falsely claimed he had no contacts with Russian officials during the presidential campaign—when he was a prominent supporter of Donald Trump. After reports that he met with Sergey Kislyak, then the Russian ambassador to the United States, Sessions changed his story, arguing that they did not discuss any campaign-related issues. Yet while testifying before the Senate judiciary committee, Sessions tweaked his explanation again, noting that it was possible that Trump campaign positions did come up with the Russian ambassador.

Sessions spoke with Kislyak on at least three occasions: in April at a Trump foreign policy speech at Washington’s Mayflower hotel; at the Republican National Convention in July; and at an August meeting in his Senate office. After the Washington Post on March 1 reported Sessions’ meetings with Kislyak, Sessions said his conversations with the ambassador were cursory and related to his work as a senator, not his status as a Trump adviser. “I never had meetings with Russian operatives or Russian intermediaries about the Trump campaign,” Sessions said later that month when he announced that he would recuse himself from matters relating to the FBI probe of Russian interference in the election and possible collusion with the Trump campaign.

In June, appearing before the Senate intelligence committee, Sessions altered his story again, saying, “I have never met with or had any conversation with any Russians or any foreign officials concerning any type of interference with any campaign or election in the United States.”

On Wednesday, when Sen. Patrick Leahy (D-Vt.) pressed Sessions on his contacts with Kislyak, the attorney general once more shifted his account, leaving open the possibility that campaign-related matters may have arisen. “I don’t think there was any discussion about the details of the campaign other than – it could have been in the meeting in my office or at the convention that some comment was made about what Trump’s positions were,” he said. “I think that’s possible.”

Sessions also told Leahy he “did not recall” if he discussed emails—the Vermont senator seemed to be referring to the emails hackers stole from the Democratic National Committee and Clinton campaign—with any Russian officials. Leahy, a former prosecutor, said that Sessions has shifted from issuing flat denials of his contacts with Russians to saying that he could not recall his conversations. Leahy later told reporters that Sessions had changed his story and given “false testimony” in January.

Sessions reacted indignantly to Democrats who challenged him about his interactions with Kislyak. He accused Sen. Al Franken (D-Minn.), who pressed Sessions to explain his shifting accounts, of treating him unfairly and “improperly framing the subject.” Sessions declined Franken’s request that he answer questions simply. “I don’t have to sit here and listen to his charges without having a chance to respond,” Sessions said. “Give me a break.”

Grassley said later in the hearing that former FBI Director James Comey in March gave a classified briefing to Grassley and Sen. Dianne Feinstein (D-Calif.), the committee’s top Democrat, regarding Sessions’ contacts with Kislyak. (In June the Washington Post reported that intelligence intercepts did indicate that Sessions had discussed campaign-related matters with Kislyak, who then shared this information with Moscow.) But Grassley added that the FBI has refused to share the information with other members of the committee.

Sessions on Wednesday said his supported Trump’s decision to fire Comey in May. Sessions said Comey usurped the power of Justice Department prosecutors in a July 2016 press conference in which Comey announced Clinton would not face prosecution over her handling of her email and erred by defending his action in a May 3 House hearing. “You cannot underestimate the error made by Comey in the handling of the Clinton case,” Sessions said.

But Sessions declined to detail communications with Trump about Comey’s ouster and stonewalled other questions related to his contacts with the White House, defying Democrats by doubling down on a novel claim of executive privilege. Government officials in past administrations have declined to disclose their oral or written communications with presidents. But Sessions, like other Trump administration officials, has asserted the right to refuse to disclose information that the president has not asserted executive privilege over, on the grounds that the president might eventually decide to do so. “I can neither assert executive privilege now nor can I disclose today my confidential conversations with the president,” Sessions said Wednesday.

Democrats say Trump administration officials have concocted that argument to evade congressional oversight. Judiciary committee Democrats say they were especially irked by Sessions’ refusal to discuss his conversations with Trump because Sessions has had months to determine if the White House will assert privilege. Democrats demanded in a letter Friday that Sessions either address their questions or offer an actual executive privilege claim. Sessions did neither.

Sen. Sheldon Whitehouse (D-R.I.) pointed out that Sessions’ claim seems to rely on a 1982 memo in which then-President Ronald Reagan gave administration officials the option of asking Congress to hold a request for information “in abeyance” while checking with the White House if the president seeks to assert privilege. But Sessions and other Trump administration officials are abusing that process by asserting power to refuse to address questions without ever asking the Trump to assert privilege, Whitehouse said. Sessions and the Justice Department won’t even say if they have asked Trump to assert executive privilege. “You can’t just have that period of abeyance go into the indefinite future,” Whitehouse said.

Democrats concede they have little power to force Sessions to change course unless committee Republicans, and in particular Grassley, reject Sessions’ expanded definition of executive privilege. But Grassley would not say Wednesday if he will challenge with Sessions’ claim.