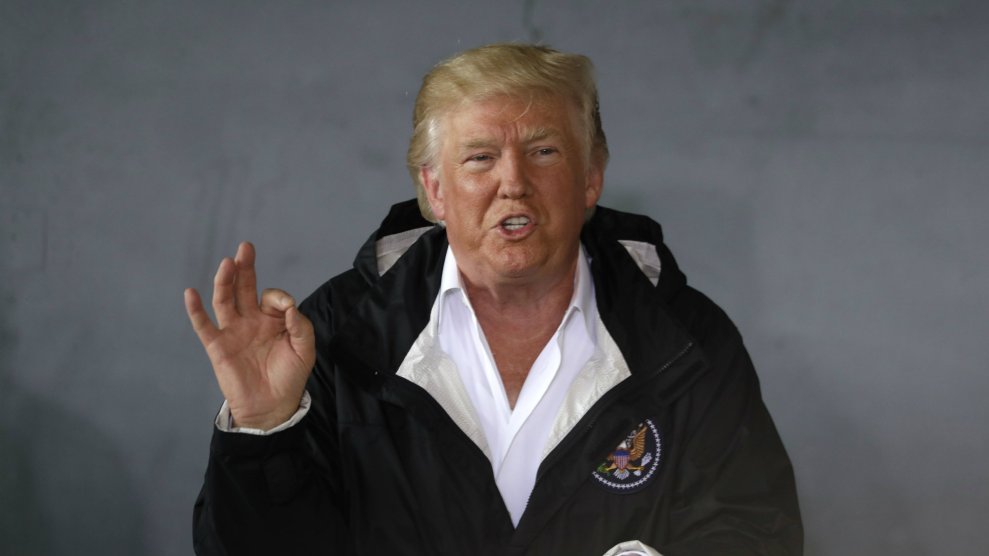 Nearly two months after Hurricane Harvey dropped more than four feet of rain in the southeast region of the state, the Federal Emergency Management Authority still has a heavy presence in Texas. The area suffered damage estimated to be up to $190 billion from catastrophic winds and flooding from the Category 5 storm, and since then electricity has been restored, clean up has progressed, and the federal government is working on finding housing for the displaced. “FEMA is going to be there for years,” FEMA administrator Brock Long said two days after the storm hit.

Contrast this with the situation for the American citizens in Puerto Rico. On Thursday morning Donald Trump threatened to withdraw FEMA and military officials from the hurricane-ravaged island, citing its longstanding infrastructure and financial issues. But it’s been only three weeks since Hurricane Maria made landfall as a strong Category 4 storm, and already Trump has tweeted his intention to walk away:

…We cannot keep FEMA, the Military & the First Responders, who have been amazing (under the most difficult circumstances) in P.R. forever!

At Thursday’s White House press briefing, Chief of Staff John Kelly said the government would stand with Puerto Rico until the job was done, but that “the tweet about FEMA and DOD is exactly accurate. They’re not going to be there forever.”

More than one-third of the island lacks clean drinking water and 84 percent of the residents still don’t have electricity. Grocery stores are slowly re-opening, but many lack fresh food. More than a week after the storm, many Puerto Ricans had yet to see a FEMA official. In rural areas, it may take up to a year before electricity is restored. Because the Puerto Rican government is hobbled by the recovery, the final death toll is still a mystery. On Sunday, San Juan Mayor Carmen Yulín Cruz took to Twitter to beg FEMA for more help.

Power collapses in San Juan hospital with 2 patients being transferred out. Have requested support from @FEMA_Brock NOTHING! @cnnbrk

In response, administrator Long dismissed her concerns saying, “We filtered out the mayor a long time ago. We don’t have time for the political noise.”

But in Texas, the Trump administration is singing a different tune. More than 760,000 people have applied for disaster assistance and FEMA inspectors are still making their way through the region. The agency has also extended hotel stays for victims who have not yet found more permanent housing. According to a FEMA spokeswoman, the agency has paid for more than 1 million nights in hotels, so far.

They have tried to make it easy for Harvey survivors to apply for disaster recovery assistance which they can do online, by phone, or in person at one of FEMA’s many Disaster Recovery Centers, located throughout the region. The deadline is October 24.

FEMA also brought in mitigation experts to hard-hit Harris County this week. The specialists were on hand to talk to Texans about how to disaster-proof their homes. The process of recovery will be long and slow, a fact the administration has no problem acknowledging.  As Vice President Mike Pence said during a trip to the Lone Star State a week after the storm,  “We’re just going to stay with the people of Texas all the way through, in not just the weeks and months, but very likely the years that it will take for us to rebuild southeast Texas.”

Meanwhile, Trump has spent the last three weeks since the hurricane hit clashing with local Puerto Rican officials, accusing them of poor leadership and saying residents need to help themselves.

The chorus of criticism of the federal response to Maria has gotten so loud that Puerto Rico has been dubbed Trump’s Katrina, a direct comparison to the Bush administration’s dismal response to the hurricane that flooded New Orleans and killed upwards of 1,500 people.

Shortly after Trump’s tweets threatening to end aid for Puerto Rico, Mayor Yulín Cruz issued a statement: “You seem to want to disregard the moral imperative that your administration has been unable to fulfill,” she said. “Help us. Without robust and consistent help, we will die.”