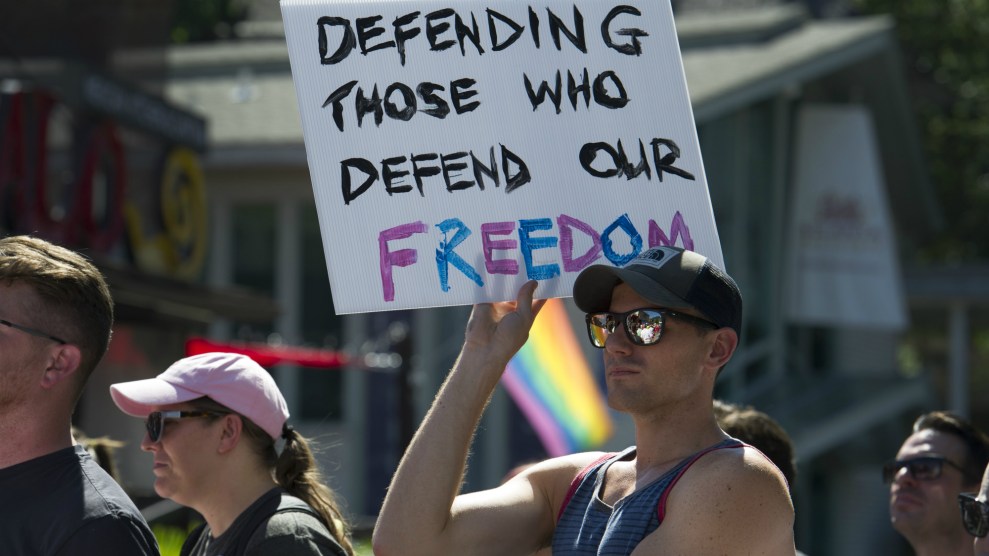 A federal court has temporarily halted the Trump administration policy that would keep transgender men and women from serving in the US armed forces, a move that could affect thousands of service members and aspiring recruits.

In August, President Donald Trump told the Pentagon to reverse an Obama-era policy that had allowed transgender service members to serve openly for the first time in history, and that had created a road map for the military to begin accepting new transgender recruits. Under Trump’s directive, Defense Secretary Jim Mattis would have the authority to determine whether active-duty transgender soldiers could continue serving, but no new transgender recruits would be allowed to join the armed forces.

The US District Court of the District of Columbia on Monday issued a preliminary injunction preventing the White House from pushing forward with the policy reversal. Judge Colleen Kollar-Kotelly wrote that the plaintiffs—a group of current and aspiring transgender service members—were likely to win their lawsuit against the administration, arguing the new policy was discriminatory. (Kollar-Kotelly is also the judge who presided over a lawsuit filed in 2014 by transgender Army whistleblower Chelsea Manning for access to hormone therapy in prison.)

Earlier this month, the Trump administration asked the court to dismiss the suit, claiming the service members had not been harmed by the policy and did not have standing to sue. “These arguments, while perhaps compelling in the abstract, wither away under scrutiny,” Kollar-Kotelly wrote in Monday’s opinion.

“The effect of the Court’s Order is to revert to the status quo with regard to accession and retention that existed before the issuance of the Presidential Memorandum,” she added.

Trump’s directive also bars the Pentagon from spending money on sex reassignment surgery for transgender service members. The injunction does not apply to that portion of the policy.

Trump first announced the transgender military ban on Twitter in July, surprising defense officials. Sources close to Mattis, who was on vacation when Trump tweeted, reportedly said he had only been given a day’s notice and was horrified that the president had resorted to social media to make such a sweeping statement.

“The court finds that a number of factors—including the sheer breadth of the exclusion ordered by the directives, the unusual circumstances surrounding the President’s announcement of them, the fact that the reasons given for them do not appear to be supported by any facts, and the recent rejection of these reasons by the military itself—strongly suggest the Plaintiffs’ Fifth Amendment claim is meritorious,” Kollar-Kotelly wrote.