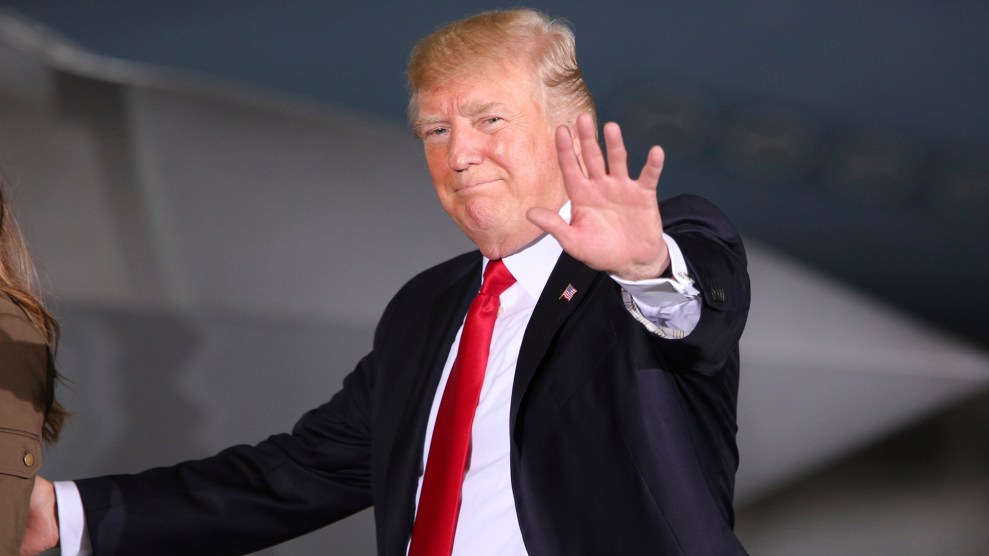 President Donald Trump at Joint Base Andrews on September 15, 2017. Oliver Contreras/Sipa via AP

In mid-August, as Washington reeled from the deadly white supremacist rallies in Charlottesville, Virginia, President Donald Trump quietly announced his pick for the top civil rights job at the Department of Homeland Security. The woman he chose doesn’t have a background in national security or in protecting civil rights. Instead, she’s a Republican election lawyer who has worked with conservative groups pushing for policies that restrict the ability of minorities to vote.

The appointment of Cameron Quinn to a prominent civil rights role is a testament to the influence in the Trump administration of a small cadre of conservative lawyers and activists who have fought against voting rights in recent years, many of whom Trump appointed to the commission he convened to ensure election integrity.

Many of the Trump administration’s most controversial priorities are overseen by DHS—most recently the termination of the Dreamer program, in addition to the aggressive push to deport undocumented immigrants and the ban on travel from six majority-Muslim countries. As a result, the department’s Office for Civil Rights and Civil Liberties could have an outsize impact on the government’s handling of minority rights. Quinn could rescind or help create policies with substantial implications for immigrants and minorities, although the influence of her office will depend on the extent to which the DHS secretary—currently Acting Secretary Elaine Duke—decides to include it in agency decision-making.

One of Quinn’s roles will be maintaining relationships between DHS and minority communities that can help report crimes and terrorism threats. Now that the Dreamer program (officially known as Deferred Action for Childhood Arrivals, or DACA) may be coming to an end, that role will be harder than ever. “When they signed up for DACA, 800,000 people put their trust in DHS to safeguard their personal information and treat them fairly,” says Megan Mack, an immigration attorney who led the Office of Civil Rights and Civil Liberties from 2013 until this January. “DHS has to manage the wind-down of DACA very carefully, and with full transparency, in order not to squander any goodwill that remains after the program was abruptly rescinded.” Much of that task will fall to Quinn.

Yet Quinn’s professional career has included work to tighten voting rules, part of a broader conservative effort that hasn’t fostered goodwill with minorities. She has worked over the years with Hans von Spakovsky, a member of Trump’s Presidential Advisory Commission on Election Integrity and formerly one of the most prominent advocates in the George W. Bush administration for voter ID laws and other restrictive policies. During the commission’s first meeting, von Spakovsky and vice chair Kris Kobach, the Kansas secretary of state, discussed whether to review naturalization forms and other data held by DHS, presumably in order to identify any non-citizen voters, even though it would violate federal privacy and immigration laws for DHS to share such information with the commission. In the past, the DHS civil rights office has intervened to prevent inappropriate information sharing about individuals by DHS.

“This administration is clearly setting the stage for a massive voter purge, so it’s obviously concerning that someone with a partisan background in elections and voting is being installed in a key civil rights position at DHS,” Vanita Gupta, president of the Leadership Conference on Civil and Human Rights and formerly the head of the Civil Rights Division at the Justice Department, said in a statement to Mother Jones. “The sham voter fraud commission has already tried to acquire an extraordinary amount of data on every voter in America, so we will certainly be vigilant against any attempt to improperly use the vast amounts of data possessed by DHS to help carry out a voter purge.”

Margo Schlanger, who led the Office of Civil Rights and Civil Liberties from 2010 to 2011, says she is worried that the work of the Obama administration to protect immigrants and minorities could be undone, particularly when it comes to undocumented immigrants detained by Immigration and Customs Enforcement. “Deaths in detention are way up,” says Schlanger, a professor at the University of Michigan law school. “It takes real work to deal with medical care issues in immigration detention, and if you screw it up, people die. And I am really worried about it.”

Schlanger, a civil rights expert who had worked on detention policy before joining the Obama administration, created new policies to improve conditions for detained immigrants and curtail racial and ethnic profiling. Quinn, who has spent her legal career working in election law, appears to have little experience in any of these areas. According to her LinkedIn profile, Quinn worked in election administration and on voting law issues, until she was appointed to the civil rights office of the Department of Agriculture in January. In a 2012 lawsuit involving her oversight of elections in Fairfax, Virginia, she described her professional experience, “almost all of which,” she said, “has been involved in election administration.”

Quinn’s track record in election law has drawn criticism from Democrats and earned her a reputation as a Republican activist. She has been involved in Republican efforts to push the unproven narrative that voter fraud is a widespread threat that must be combated with restrictive voting laws, such as voter ID requirements. These measures have repeatedly been found to disproportionately reduce voting among minority, poor, and elderly citizens.

In 2005, when Republicans were trying to provide academic proof of widespread voter fraud, a top lawyer for Bush’s reelection campaign founded the American Center for Voting Rights (ACVR) to raise concerns about illegal voting. Quinn served as one of the group’s directors. The group, staffed with Republican operatives, faced allegations that it was a front for efforts by Karl Rove and national Republicans seeking to disenfranchise Democratic voters through restrictive laws. ACVR and its nonprofit arm attempted to assemble evidence of voter fraud with their own research reports, submitted court briefs, and hired lobbyists to help pass voter ID laws in Missouri and Pennsylvania. They were aided in this effort by the Republican National Lawyers Association, where Quinn was a member and served in various leadership roles over the years. (A few years later, as an independent consultant, she counted the association as a client.)

ACVR closed its doors—really just a PO box—suddenly in March 2007. Its website domain expired, taking with it the group’s reports and testimony. Quinn’s LinkedIn page and Republican National Lawyers Association bio page do not mention it. By the time of ACVR’s demise, Quinn was working as the special counsel for voting matters at the Civil Rights Division of the Justice Department, succeeding von Spakovsky.

In 2010, at the recommendation of local Republicans, von Spakovsky was appointed to the three-member electoral board for Fairfax County, Virginia, a diverse, Democratic-leaning county with more than 700,000 voters. The next year, the board picked Quinn to be the county’s general registrar for elections, a four-year position that oversees election administration. Over the next four years, Quinn and von Spakovsky pushed practices and reforms that Democrats alleged limited the ability of county residents to vote.

On Election Day 2012, there were long lines at the polls, which Quinn blamed partly on a lack of poll workers. Volunteer poll workers are chosen by the local Democratic and Republican parties, then approved by the registrar and the electoral board. But according to the Washington Post, Quinn and the electoral board had slow-walked the approval of hundreds of Democratic poll workers. Quinn’s office had also instructed poll-watchers not to speak to voters, even though the law stipulates that they can answer voters’ questions.

“She came in, and they proceeded to make life as miserable as possible for my party and for the voters of the county, making it as hard as possible for people to vote,” says John Farrell, who served as general counsel for the Fairfax County Democratic Committee at the time.

A 2013 report by an outside consultant found that Quinn’s poor management contributed to dysfunction in her office. Two years later, she asked the board not to appoint her to a second term as general registrar, citing health problems and the stress of overseeing another presidential election. She and von Spakovsky have continued to team up from time to time, co-teaching a class on election law at George Mason University’s Antonin Scalia Law School each of the past three years, according to course schedules on the school’s website.

Quinn’s start date at DHS has not yet been determined. David Lapan, the DHS spokesman, dismissed the criticisms of Quinn. “Ms. Quinn is highly qualified for the position for which she has been announced and the allegations against her are without merit,” he wrote in an email. Quinn did not respond to a request for comment.