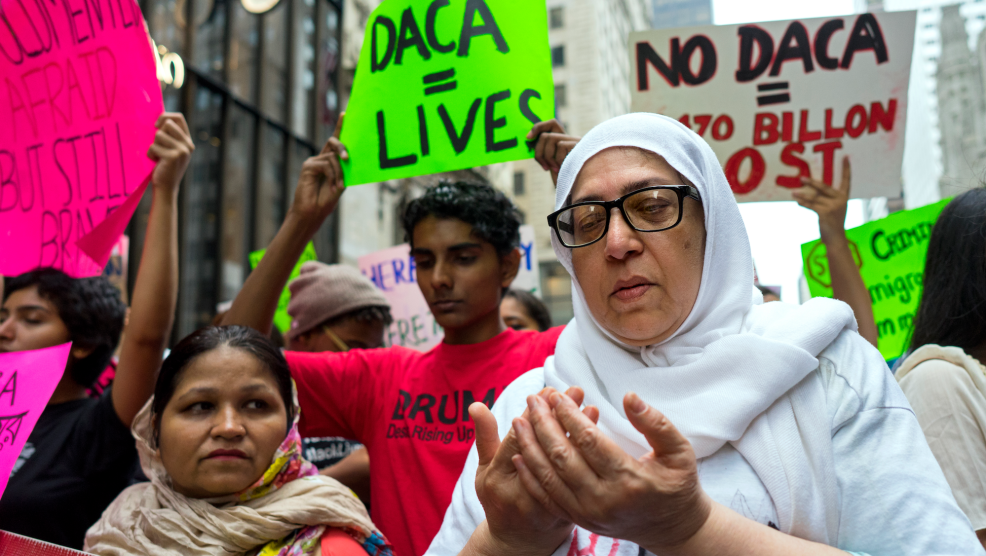 The undocumented immigrants affected by the decision, who are known as Dreamers, were given permission to work and study in the United States by President Barack Obama in 2012. The decision to end the Dreamer program—officially Deferred Action for Childhood Arrivals, or DACA—is Trump’s most significant, and harshest, decision on immigration policy. If Congress does not act and Trump ends the program, hundreds of thousands of young immigrants would lose their ability to work and study legally in the United States and become subject to possible deportation.

Sessions said that the Trump administration would “wind down” DACA, giving Congress time to pass a bill to replace Obama’s executive action. Under the policy announced Tuesday, the federal government will not consider any new DACA applications but will process applications it has already received. Anyone whose DACA status expires before March 5, 2018, will be given one month to apply for a two-year renewal. After that, all Dreamers whose two-year protections expire could be subject to deportation.

At Tuesday’s announcement, Sessions emphasized the rule of law, describing DACA as a “unilateral executive amnesty” that would not hold up in court. He also said that DACA recipients were taking jobs from American citizens.

There is still the possibility that Trump will keep DACA, or prevent US Immigration and Customs Enforcement from targeting DACA recipients, after the program ends. A senior White House adviser told Politico he does not expect Trump to end DACA if Congress fails to pass a bill. Two Trump administration officials told ABC News on Tuesday that Dreamers will not be targeted if Congress fails to act. The possibility that this is all a bluff could infuriate hardline conservatives who have demanded that Trump end the program.

To qualify for DACA, Dreamers had to show that they had been in the country since 2007, arrived before they turned 16, and not committed serious crimes. The average Dreamer came to the United States at six years old and is now 25, according to a survey by University of California-San Diego professor Tom Wong.

The possibility that this is all a bluff could infuriate hardline conservatives who have demanded that Trump end the program.

During the presidential campaign, Trump pledged to end DACA, but he softened his position after winning the election. “The DACA situation is a very difficult thing for me, as I love these kids,” he said in February. In April, Trump told Dreamers that they should “rest easy” because his administration was focused on deporting criminals. On Friday, he repeated that “we love Dreamers.” But after months of reluctance, Trump ultimately sided with hardline advisers who oppose letting Dreamers stay in the United States.

Trump’s decision to end DACA comes amid a threat by nine Republican state attorneys general, led by Texas’ Ken Paxton, to challenge it in court if Trump didn’t scrap it by Tuesday. If he hadn’t ended DACA and had been sued, Trump would have had to decide whether the Justice Department and Attorney General Jeff Sessions, a vocal opponent of DACA, would defend the program. Despite the devastation caused by Hurricane Harvey, Paxton said he would not push back his deadline. More than 120,000 DACA recipients live in Texas.

Ending DACA does not mean that most Dreamers will be quickly deported. The Trump administration is currently deporting about 17,000 people per month—a slower pace than under Obama—and is facing a 617,000-case backlog in the immigration court system. Unlike most undocumented immigrants apprehended at the border, Dreamers have the right to make a case for themselves in immigration court, a process that takes nearly two years on average. But Dreamers will first try to avoid being detained. For many, that could mean a return to the shadows.

Dreamers’ fears of deportation are amplified by the fact that when registering for DACA, they provided their addresses and other personal information to the government. US Immigrations and Customs Enforcement (ICE) could use that information to apprehend Dreamers more easily than other undocumented immigrants. Despite the administration’s claims that it is focused on deporting criminals, noncriminal immigration arrests have more than doubled under Trump.

More than 70 percent of Republicans and independents favor allowing Dreamers to stay in the United States.

As their DACA grants expire, Dreamers will continue to press Congress to pass the DREAM Act, which gave rise to the Dreamer label after being introduced in 2001. (Trump tweeted on Tuesday, “Congress, get ready to do your job – DACA!”—suggesting that he might join the call for some sort of legislative protection for Dreamers.) The bill would give DACA recipients a path to citizenship, beginning with conditional legal status in the United States. From there, they could become permanent residents if they stay in the workforce or complete two years of college or military service. The current version of the DREAM Act is backed by Democrats, as well as Republican Sens. Lindsey Graham of South Carolina and Jeff Flake of Arizona and Lisa Murkowski of Alaska.

More than 70 percent of Republicans and independents favor allowing Dreamers to stay in the United States, according to a June poll by the nonpartisan Morning Consult. The timing of the expirations, which will begin to peak before the November 2018 midterm elections, is not likely to help Republicans in moderate districts. On Friday, House Speaker Paul Ryan said that he did not support ending DACA and that Congress should pass legislative protections for Dreamers. “These are kids who know no other country, who were brought here by their parents and don’t know another home,” he said in a radio interview. “And so I really do believe there that there needs to be a legislative solution.” Some Republicans have been more sharply critical of Trump’s move:

After teasing #Dreamers for months with talk of his "great heart," @POTUS slams door on them. Some "heart"…

Right-wing opposition could make it difficult for Ryan to get the DREAM Act, or similar legislation, through the House. “I just don’t think we can make the mistake of assuming the opposition isn’t formidable, even if we have some conservative support,” a well-connected immigration advocate told Politico. On Sunday, Rep. Steve King (R-Iowa), one of Congress’ harshest critics of undocumented immigrants, attacked Trump on Twitter for supporting a six-month delay, saying that giving Dreamers “amnesty” would be “Republican suicide.” King followed up on Tuesday to say former DACA recipients will “make great ‘Peace Corp’ volunteers” in their home countries.

Other Republicans appear more willing to compromise. One way try to break the impasse would be to protect Dreamers in exchange for increased enforcement along the Mexican border. Democrats and advocates for Dreamers have said they have no interest in turning Dreamers into a bargaining chip, though it’s still to early to stay if they’ll stick to that position.

Regardless of what happens, Dreamers have already paid a price. For months, they have feared whether Trump will appease his base or keep his promise to treat Dreamers “with heart.” After Politico reported on Sunday that Trump would end DACA, Juan Escalante, a Dreamer and advocate, wrote on Twitter that thinking about losing DACA status “is not just traumatizing, it’s dehumanizing and exhausting.” That trauma, he added, is combined with the fear of knowing that Dreamers’ undocumented parents are not protected by DACA. “If we were stressed and sacred back then without DACA, under Obama,” Escalante asked, “can anyone imagine life [without] DACA under Trump?”