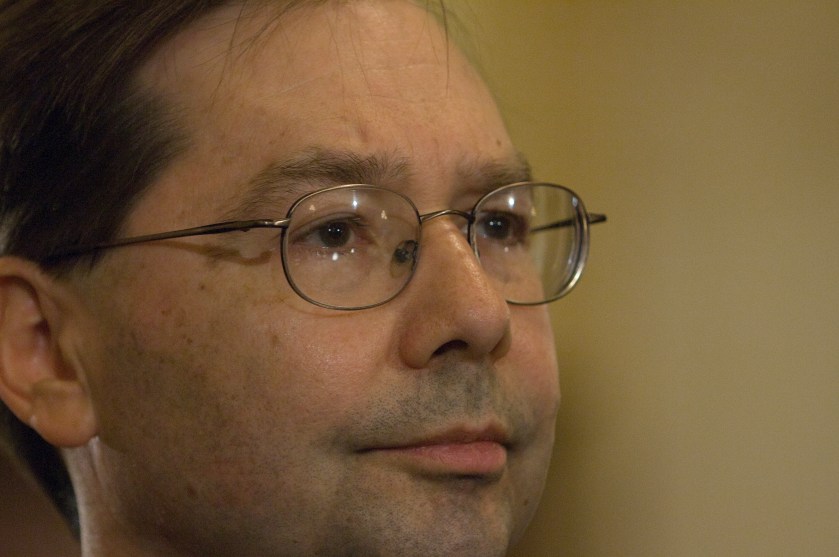 Hans von Spakovsky appears before the Senate in 2007 after being nominated to the Federal Election Commission.CQ Roll Call/AP

Months before the Trump administration announced the creation of a controversial commission to examine the country’s voting systems, one future commissioner sent an email that was forwarded to Attorney General Jeff Sessions recommending that the commission exclude Democrats and “mainstream Republican officials and/or academics.”

The email was sent on February 22 by Hans von Spakovsky of the Heritage Foundation, a former Justice Department official in the George W. Bush administration known for his efforts to impose new restrictions on voting. In it, von Spakovsky warned that Democrats would get in the way of efforts to crack down on voter fraud—an issue that commissioners have sought to portray as a major threat, but which in reality is exceedingly rare.

Von Spakovsky ridiculed the idea of forming a bipartisan commission, as the administration ultimately did, although most of the commissioners are conservatives fixated on fraud. “There isn’t a single Democratic official that will do anything other than obstruct any investigation of voter fraud and issue constant public announcements criticizing the commission and what it is doing, making claims that it is engaged in voter suppression,” he wrote. “That decision alone shows how little WHouse understands about the issue.”

Von Spakovsky added, “If they are picking mainstream Republican officials and/or academics to man this commission it will be an abject failure because there aren’t any that know anything about this or who have paid any attention to this issue over the years.”

Von Spakovsky worried that the commission’s eventual vice chair, Kansas Secretary of State Kris Kobach, was considered “too ‘controversial’” by some people to be on the commission. “We are concerned that this commission is being organized in a way that will guarantee its failure,” he wrote, lamenting that he and others on the “conservative side of this issue” were not consulted. The names of those conservatives were redacted by the Justice Department, which released the email following a Freedom of Information Act request by the Campaign Legal Center.

Jessica Huseman of ProPublica asked von Spakovsky after the commission’s second meeting, on Tuesday in New Hampshire, whether he’d written the email, and he denied having done so. But the Heritage Foundation confirmed on Tuesday evening that von Spakovsky was the author, telling Dell Cameron of Gizmodo, “The views expressed in the email are his own.” On Wednesday, von Spakovsky clarified that he had sent the email to “private individuals” but not to Sessions, as he thought Huseman had implied. The email was eventually forwarded to Sessions.

Though a few Democrats were named to the commission, it was stacked with conservative Republicans like Kobach, von Spakovsky, former Ohio Secretary of State Ken Blackwell, and former Justice Department attorney J. Christian Adams, who have a long history of exaggerating the threat of voter fraud and recommending policies that restrict access to the ballot. The commission was formed after Trump, with no evidence, said that 3 to 5 million people voted illegally in the 2016 election. Trump called von Spakovsky “a real expert” when the commission met for the first time in July.

The commission has been steeped in controversy since its inception for spreading falsehoods about the prevalence of voter fraud, requesting the voter data of every American, and allegedly violating numerous federal laws.

Following the release of the email, civil rights leaders called on von Spakovsky to resign from the commission and for the commission itself to be disbanded. Vanita Gupta, who headed the Justice Department’s Civil Rights Division under President Barack Obama, tweeted:

This shows precisely why we need full transparency from this commission. It is the problem, not the solution, and should be disbanded. 7/

It's clear that this commission is nothing more than a thinly veiled attempt to advance the voter suppression agenda. It must be disbanded!

And Rep. Gerry Connelly of Virginia:

Hans von Spakovsky's email to Sessions is clear indictment of commission's nefarious motives. He should resign and commission disbanded. https://t.co/aJdZm26VKr

Von Spakovsky has a long record of pushing to restrict voting rights. For two decades, he’s been the driving force behind suppressive policies like strict voter ID laws. When he was counsel to the head of the Civil Rights Division in the Bush Justice Department, six former lawyers in the Department’s Voting Section called von Spakovsky the “point person for undermining the Civil Rights Division’s mandate to protect voting rights.”

Rep. John Lewis (D-Ga.) once said of von Spakovsky, “It’s like he goes to bed dreaming about this, and gets up in the morning wondering, ‘What can I do today to make it more difficult for people to vote?’”

He also has a well-documented pattern of unethical behavior. In 2005, as the department was considering whether to approve Georgia’s strict voter ID law under the Voting Rights Act, von Spakovsky published a law article praising voter ID laws under the pseudonym “Publius.” The article, in the Texas Review of Law & Politics, a conservative legal journal, was titled “Securing the Integrity of American Elections: The Need for Change,” and its author was identified as “an attorney who specializes in election issues.” Publius wrote, “It is unfortunately true that in the great democracy in which we live, voter fraud has had a long and studied role in our elections,” adding that “putting security measures in place—such as requiring identification when voting—does not disenfranchise voters and there is no evidence to suggest otherwise.”

Justice Department ethics guidelines clearly stated that von Spakovsky should have recused himself from consideration of Georgia’s law, given his long-standing advocacy for voter ID laws and the strong viewpoints in his then-anonymous article. Instead, he played a key role in approving the law, among the first of its kind, even though several lawyers on the review team recommended that it be blocked for discriminating against African American voters.

At the commission’s first meeting, Vice President Mike Pence said it would have “no preconceived notions or preordained results.” But judging from von Spakovsky’s email and the subsequent work of the commission, its agenda is more than clear.

This story has been updated to reflect von Spakovsky’s Wednesday statement about the email.