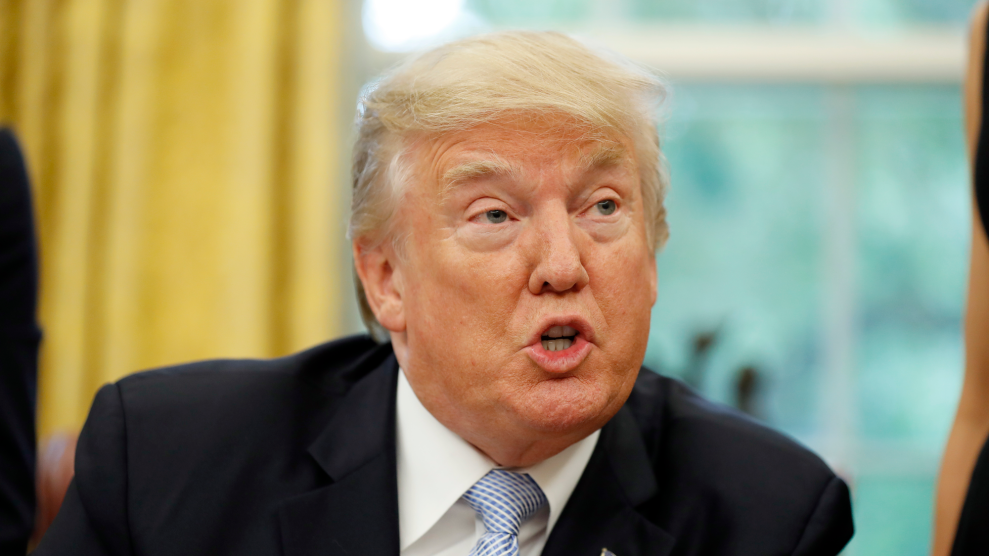 On Tuesday, President Donald Trump will decide whether to keep in place Obama-era protections that allow nearly 800,000 undocumented young people, known as Dreamers, to work and study in the United States. As the controversial decision approaches, the policy—officially called Deferred Action for Childhood Arrivals, or DACA—has received support from an unlikely group of people: prominent Republican politicians. They’re joined by Democrats, immigrant rights advocates, and the leaders of some of the country’s largest companies in calling on Trump to reject immigration hardliners’ demands to end the program.

DACA provides Dreamers with two-year, renewable permits that allow them to live the United States without being detained or deported. To qualify for the protection, Dreamers have to show, among other requirements, that they arrived in the United States before they turned 16 and have not committed serious crimes. The average Dreamer came to the United States at six years old and is now 25, according to a survey by University of California-San Diego professor Tom Wong.

“These are kids who know no other country, who were brought here by their parents and don’t know another home.”

Many Republicans have long argued that DACA, which is not a law but a 2012 executive action by President Barack Obama, is unconstitutional. During the campaign, Trump repeatedly criticized DACA, calling it one of Obama’s “illegal executive amnesties.” But Trump softened his position after winning the election. “The DACA situation is a very difficult thing for me, as I love these kids,” he said in February. In July, he repeated that it was a “very very hard” decision. Asked about the issue Friday, Trump said that “we love Dreamers”; he’s reportedly torn about whether to end DACA. Later on Friday, White House Press Secretary Sarah Huckabee Sanders said that a decision will be announced on Tuesday, ending weeks of speculation about when the decision would be made.

On Friday, House Speaker Paul Ryan became the most prominent Republican to pressure Trump not to end DACA, saying that the president should leave it up to Congress. “These are kids who know no other country, who were brought here by their parents and don’t know another home,” he said in a radio interview. “And so I really do believe there that there needs to be a legislative solution.” Ryan’s comments come one day after hundreds of CEOs and business leaders, including executives at Apple, Facebook, and General Motors, sent Trump an open letter calling on him to keep DACA in place.

Perhaps the most surprising statement in support of DACA has come from Tennessee Attorney General Herbert Slatery III, a Republican. In June, Slatery, along with nine other state attorneys general, threatened to challenge DACA in court if the Trump administration didn’t end the program by September 5, which is Tuesday. The White House announcement may be intended to meet the AGs’ deadline, but on Friday afternoon, Slatery announced that he’s changed his mind. “There is a human element to this…that is not lost on me and should not be ignored,” Slatery wrote in a letter addressed to Tennessee Republican Sens. Lamar Alexander and Bob Corker. “Many of the DACA recipients, some of whose records I reviewed, have outstanding accomplishments and laudable ambitions, which if achieved, will be of great benefit and service to our country. They have an appreciation for the opportunities afforded them by our country.”

Instead, Slatery suggested that Congress should consider a bipartisan bill introduced by Sens. Lindsey Graham (R-S.C) and Richard Durbin (D-Ill.) that would give Dreamers a path to citizenship. “It is my sincere hope,” Slatery wrote, “that the important issues raised by the States will be resolved by the people’s representatives in the halls of Congress, not in a courtroom.”