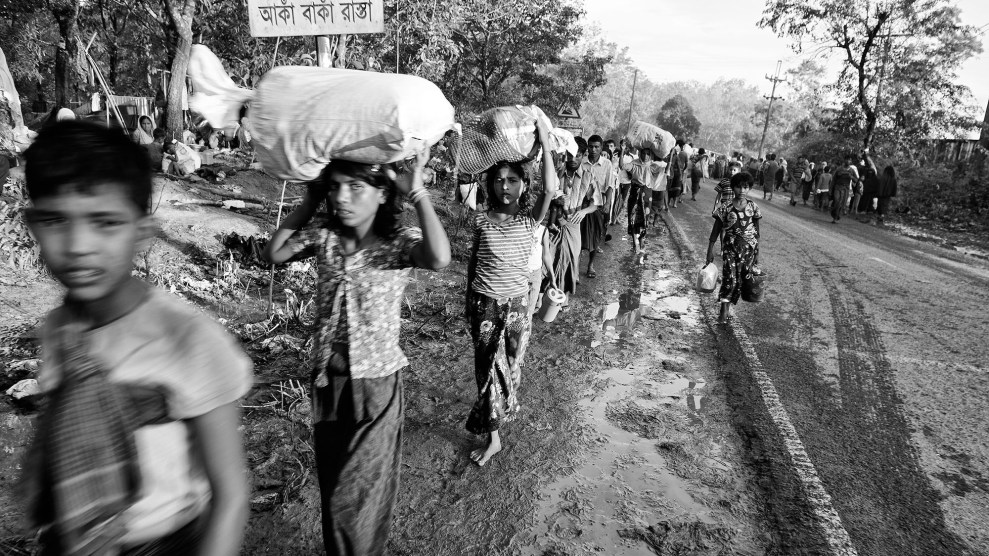 Hundreds of thousands of Rohingya have flooded into southern Bangladesh over the past month. The north-south highway between Cox's Bazar and Tenaf is a steady flow of refugees.Greg Constantine

The phone rang, and Nasir Bin Zakaria jolted awake. It was almost 2 a.m. on Tuesday, and the 40-year-old community leader had gone to bed only an hour earlier. The streets outside his apartment in downtown Chicago were quiet. “Hello?”

The men on the line sounded panicked. They had never met Bin Zakaria. They lived on the other side of the world, in a small village in western Burma, where, in the mid-afternoon heat, they were preparing to run for their lives.

Bin Zakari’s wife lay asleep in bed as he stood in the hallway and spoke with the men, who, like him and his wife, were Rohingya Muslim. Bin Zakaria leads a Rohingya cultural center in Chicago, home to one of the largest Rohingya populations in the United States. The men had found his number on WhatsApp. They didn’t know him, but it didn’t matter: Burmese soldiers were coming to hurt them, they said, and they needed help.

In late August, the Burmese military ratcheted up a scorched-earth campaign against the Rohingya that the UN has described as “a textbook example of ethnic cleansing.”

It was a jarring but somewhat familiar encounter for Bin Zakaria, who fled Burma as a teenager in the 1990s. The Rohingya have faced decades of discrimination, but over the past several weeks the phone calls for help to this Chicago refugee have become more urgent, as the situation in Burma has spiraled into an unprecedented crisis. In late August, the Burmese military ratcheted up a scorched-earth campaign against the Rohingya that the United Nations has described as “a textbook example of ethnic cleansing.” Nearly half a million people have since fled to Bangladesh—the most rapid outpouring of refugees from any country since before the Rwandan genocide in 1994.

Now, thousands of Rohingya in the United States are watching anxiously as the Trump administration, which has spoken out against the violence, moves to slash the number of refugees who will be allowed to join them next year. With the 120-day refugee ban set to expire, administration officials announced this week that President Donald Trump plans to restrict new arrivals to a maximum of just 45,000 during the next financial year, which begins October 1. That compares with an annual limit of 110,000 refugees during Barack Obama’s last year in office, and would be the lowest cap in decades. By contrast, Germany has accepted more than 1 million refugees since 2015.

The number of annual Rohingya arrivals more than tripled during the last few years of the Obama administration.

Reducing the number of refugees allowed into the country may have bigger consequences for the Rohingya than most Americans realize. While Trump’s rhetoric has centered on fears of Muslim refugees from the Middle East, the largest group of new arrivals over the past decade hasn’t come from places like Syria or Iraq—they’ve come from Burma. Since 2005, nearly 170,000 refugees have resettled here from the Buddhist-majority country, representing almost a quarter of the total refugee arrivals to the United States during that period. Though most of them were Christians fleeing violence in Burma’s countryside, the number of annual Rohingya arrivals more than tripled during the last few years of the Obama administration. In the 2015 financial year, about 2,600 Rohingya refugees came to the United States, compared with about 1,600 refugees from Syria.

Chicago is home to more than 1,000 Rohingya refugees. When Bin Zakaria arrived there in 2013, he had little more than a suitcase of clothes for his wife and baby, and he spoke hardly any English. He had fled Burma when he was just 14, after the Burmese army tried to use him as a porter. He went first to Bangladesh, then to Thailand and Malaysia, where he lived as an undocumented immigrant and supported himself with odd construction jobs. When he finally landed in the Windy City, he found work as a dishwasher at a casino restaurant, braved his first snowfall, and met a growing community of other Rohingya. Last year he opened the Rohingya Cultural Center, which offers English and Koran classes and other support to new arrivals.

But his attention has increasingly turned to those he left behind. It’s hard to know what’s happening in Burma, since journalists have been blocked from the conflict zones. Burma’s government denies allegations of ethnic cleansing and says violence was provoked by Rohingya militants, but satellite images show arson attacks on Rohingya villages. United Nations medics have found evidence of widespread rape, and hundreds of Rohingya have been reported dead. Bin Zakaria worries about his brothers and parents, rice farmers who stayed behind in his native Arakan State; about half the Rohingya population in the state has fled east to Bangladesh. His mom and dad are too old and sick to make the journey. “They are right now waiting to die,” he says.

The United States recently pledged nearly $32 million in humanitarian aid to the Rohingya in Burma and Bangladesh. “The images of the violence and its victims have shocked the American people and decent people all over the world,” Vice President Mike Pence told the UN Security Council last week, calling for “strong and swift action to bring this crisis to an end.” But the administration’s threats to lower refugee admissions have drawn sharp rebuke. “Whether Rohingya refugees or ‘Syrian babies,’ this administration’s claims of concern ring hollow when paired with the stifling of one of its most effective means of rescuing and reinventing lives: resettlement,” says Said Hans Van de Weerd, vice president of US programs at the International Rescue Committee, which helps resettle refugees in the United States.

“This administration’s claims of concern ring hollow when paired with the stifling of one of its most effective means of rescuing and reinventing lives: resettlement,” says IRC’s Said Hans Van de Weerd.

Trump’s new refugee policy will be announced as aid workers in Bangladesh struggle to feed and shelter the mass exodus. The Rohingya there aren’t allowed to apply for resettlement to third countries like the United States; according to the UN Refugee Agency, the Bangladeshi government suspended that resettlement program in 2010. But those who eventually make it elsewhere—perhaps to Thailand or Malaysia, as Bin Zakaria did—can apply for refugee status in the West. About 700,000 Rohingya already live in Asia outside Burma and Bangladesh, or in the Middle East.

“In general, with growing refugee numbers and needs around the world, resettlement is an increasingly important…tool to help refugees rebuild their lives,” a spokeswoman for the UN Refugee Agency wrote in an email. But it’s also a “limited solution, due to the few countries that offer resettlement.” Thirty-seven nations have resettlement programs—and the US program is the biggest.

Yet, thanks in part to Trump’s refugee ban, the number of Rohingya arrivals to the United States has dropped off: There were just 1,026 arrivals over the past year, half as many as the year before. “We would not speculate about future admissions,” a State Department official told Mother Jones.

Though it lasted only about five minutes, the 2 a.m. call from Burma kept Bin Zakaria up for most of the night. The men told him Burmese soldiers threatened to burn down their homes if they didn’t hand over their wives and daughters within the next several hours. The soldiers would return soon. “If anything happens, make a video. Take a picture. Whatever you can do,” Bin Zakaria told the men on the phone. In the end, they said they would flee together into the jungle, where they could walk with their families for weeks before making it to Bangladesh. “Without food, without water?” Bin Zakaria thought to himself. Then the connection failed, the line cut, and the men were gone, leaving him alone in the dark.