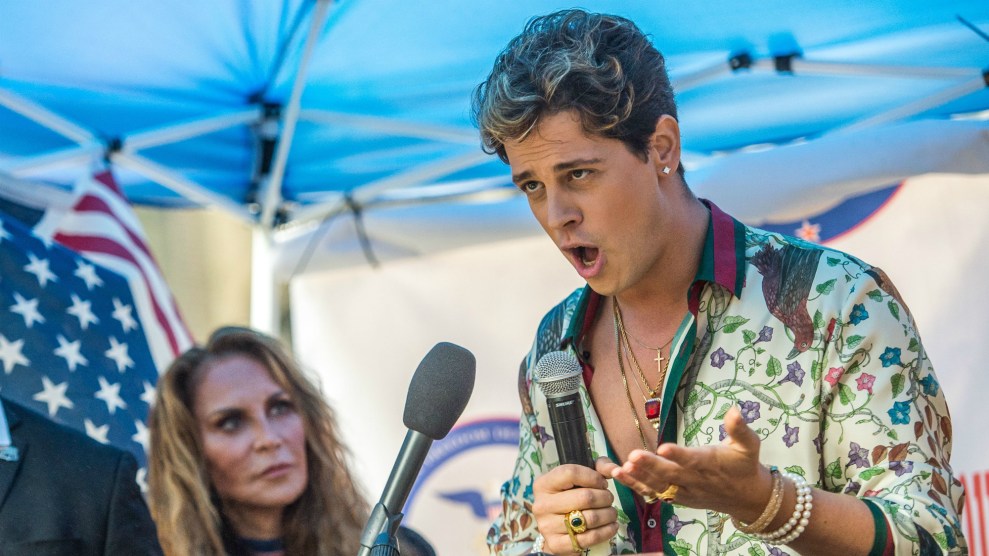 To look across UC Berkeley’s Sproul Plaza as Milo Yiannopoulos kicked off his much hyped “Free Speech Week” on Sunday was to see a vast expanse of mostly empty concrete, and in the distance, a small gaggle of Milo devotees at the plaza’s northern edge. They were waving signs—“Feminism is cancer,” “Dangerous Faggot [heart],” “Milo is Love, Milo Is Life, Milo is Liberty.” They, presumably, were making a lot of noise, but from a few hundred feet out, you’d barely notice them if you weren’t looking for them.

Even still, Yiannopoulos, never one to shy from the spotlight, was basking in whatever glory this provided. Police had cordoned off the inner plaza where Yiannopoulos spoke. They were letting in fans and detractors alike, but slowly, and subject to a metal detector. So at noon, while hundreds of people protesting the event were crowded at the university’s southern entrance behind police barricades, Yiannopoulos entered from the north, walking to the sparsely attended plaza while linked arm-in-arm with Pizzagate conspiracy theorist Mike Cernovich and anti-Muslim activist Pamela Geller. With his famously decorative hair, the far right provocateur wore an American flag-patterned sweatshirt under a denim jacket, topped off with his typical giant sunglasses.

With Sproul Plaza’s steps serving as his stage, he gave a brief speech, absent of amplification, and signed his fans’ posters and took selfies. He criticized the National Football League players who have kneeled in protest during the national anthem, and then led a prayer “for the protesters who don’t know what they’re doing.” He sang the National Anthem. And as abruptly as he’d entered, he left.

It all took place, as the University of California Police Department Chief Margo Bennett later put it, in front of “a crowd—um, a group—of about 25 to 30 people.” And it was all over in about 25 minutes. “Milo is leaving,” I heard one protester say to a friend. “What?” the other responded. “Already?” For something that was originally billed as a four-day extravaganza with a murderer’s row of far-right speakers, few words were delivered in the end.

Yiannopoulos would later lament the “hundreds” of fans he said the university prevented from entering, but the reality was that he came and went in less than a half hour, never really giving his own fans—or even his detractors who often fuel the clashes on which he thrives—a chance to join the charade. “It’s unclear to us why Mr. Yiannopoulos decided to start speaking when he did, and why he decided to end when he did—people were still coming in from the enclosed area,” said Dan Mogulof, UC Berkeley’s spokesman at a press conference later that day.

It was “probably the most expensive photo op in the university’s history.”

It was “probably the most expensive photo op in the university’s history,” said Mogulof. The unofficial estimate from the university on Sunday was that it cost the university approximately $800,000 and drew a total crowd of 700 to 800 people who mostly remained outside the inner Sproul Plaza barricades. Some were fans of Yiannopoulos and President Trump, sporting MAGA hats, Milo t-shirts, and wrapped in American flags; the vast majority were not. Protesters chanted and arguments broke out, but the clashing remained verbal. The police presence was enormous, including dozens on motorcycle, an armored vehicle, and rows of cops in riot gear. When a reporter asked Mogulof if the show of force was overkill, he responded, “Hindsight is a beautiful thing.”

Coloring that hindsight is a theory, reported by The Mercury News over the weekend, that the Free Speech Week flop was actually what Yiannopoulos and the student organizers from the Berkeley Patriot wanted. On Saturday morning, Mogulof sent reporters an e-mail exchange between himself and Lucian Wintrich, an editor at the right-wing website Gateway Pundit who was scheduled to speak and later dropped out in frustration.

“It was known that they didn’t intend to actually go through with it last week, and completely decided on Wednesday,” wrote Wintrich.

“Wait, Whoah [sic], hold on a second,” Mogulof responded. “What, exactly, are you saying? What were you told by MILO Inc? Was it a set-up from the get-go?”

But this reading—that Yiannopoulos masterminded an intentional failure to reignite his status as a tireless defender of free speech—would be generous.

A recent profile of Yiannopoulos in Playboy casts him as a prescription pill-popping “conservative propaganda machine” with a “Hindenburg-sized ego” who has been planning a boisterous comeback ever since a February scandal forced him to resign from Breitbart News. Over comments he made about pedophilia—“I wouldn’t give nearly such good head if it wasn’t for him,” he said of a clergyman he claims sexually abused him as a teen—he also lost a lucrative book deal and was disinvited from speaking at CPAC. “I play super-villain because it’s good marketing,” Yiannopoulos told Playboy. But he’s been largely relegated to the shadows since the scandal. Free Speech Week was supposed to be the first stop in his reincarnation tour, a series of speaking events collectively dubbed “Troll Academy.” “I believe the challenge for us is to create something so attention-grabbing that it produces another U.C. Berkeley and I can sell another 100,000 copies of the book,” Yiannopoulos is quoted saying in Playboy, a reference to violent protests in Berkeley earlier this year that were tied to a speech he was scheduled to give on campus. Of Free Speech Week, he said, “Hopefully, God smiles on us and Antifa comes out and fire-bombs the entire university.”

But, from the start, the event was mired in disorganization and incompetence. Shortly after Yiannopoulos publicized a list of 25 speakers he said would attend, four of them—Heather MacDonald, Charles Murray, Erik Prince, and James Damore—said they had not been invited and would not be participating. Charles Murray told the Chronicle of Higher Education, “I would never under any circumstances appear at an event that included Milo Yiannopoulos.” When the Chronicle asked why he wouldn’t appear with Yiannopoulos, Murray said, “Because he is a despicable asshole.” Others, including right-wing talking head Ann Coulter and former White House chief strategist Steve Bannon, had been invited but never confirmed whether they would participate. (Bannon was actually scheduled to and did appear at a political rally in St. Louis on Sunday instead.) The organizing student group, the Berkeley Patriot, consistently missed key deadlines, modified the schedule and its list of speakers, and failed to provide contracts or confirmations of the speakers they invited, as the university requested.

Even if you could chalk that all up to some master plan, it’s unclear why even those who’d agree to participate in the events were sometimes kept in the dark. “Everybody I spoke to was in the same boat as me, where nothing was being turned in, no itinerary was being booked, and the people who were supposed to be organizing it became uncommunicative,” Gateway Pundit‘s Wintrich claimed to Mother Jones on Sunday.

“Everybody I spoke to was in the same boat as me, where nothing was being turned in, no itinerary was being booked, and the people who were supposed to be organizing it became uncommunicative.”

University spokesman Mogulof, meanwhile, told Mother Jones on Sunday that he heard from three other speakers, aside from Wintrich, who expressed frustration with how the event was organized. (He declined to say whom.)

More than a month ago, according to KQED News, the students involved in the Berkeley Patriot had became so concerned over their ability to pull off the event that they discussed rescinding their invitation to Yiannopoulos. By Friday, they pulled out of the event entirely, despite publicly claiming that it would go on as planned throughout the week.

It wasn’t until Saturday at an “emergency” press conference broadcast on Facebook Live to fewer than 3,000 viewers that Yiannopoulos finally conceded the four-day festival would look a little different than he previously claimed. In a dimly-lit hotel room, he allowed that with the Berkeley Patriot out, he had lost his university sponsor, and he admitted that at least one speaker he originally listed—Charles Murray, a controversial fellow at the American Enterprise Institute—was included as an act of trolling. Yiannopolous then placed the blame for the event’s implosion squarely on the university, saying that it “had done everything in its power to crush” the event. So instead, he would hold an “unofficial” rally at the campus on Sunday. “We are going to be hosting an event, come hell or high water, tomorrow,” he said, and declared that conservative activists Lauren Southern, Lisa De Pasquale, SABO, and others would be joining him.

That was news to at least one of them. “I’ve been almost as out of the loop as everyone there,” Southern told Mother Jones in an e-mail Sunday morning. “I said I’d be at the event but I was never told I’d be mentioned in the presser or leading it or speaking.”

“The way this entire thing was handled, it makes us all look unprofessional,” says Wintrich. “It also obviously has an effect on how speeches are booked in the future. If a school does go through that process and spends that money and nothing happens, you can only imagine they’re going to make us jump through much greater hoops in the future, especially if the narrative becomes it was [the University’s] fault.”

After Yiannopoulos and his entourage left, after a press conference with the university wrapped, and after most of the protesters went home, what remained of the Milo fan club was a group of just four young men wearing MAGA hats, standing alone on a street corner near campus, shouting, “USA! USA! USA!”