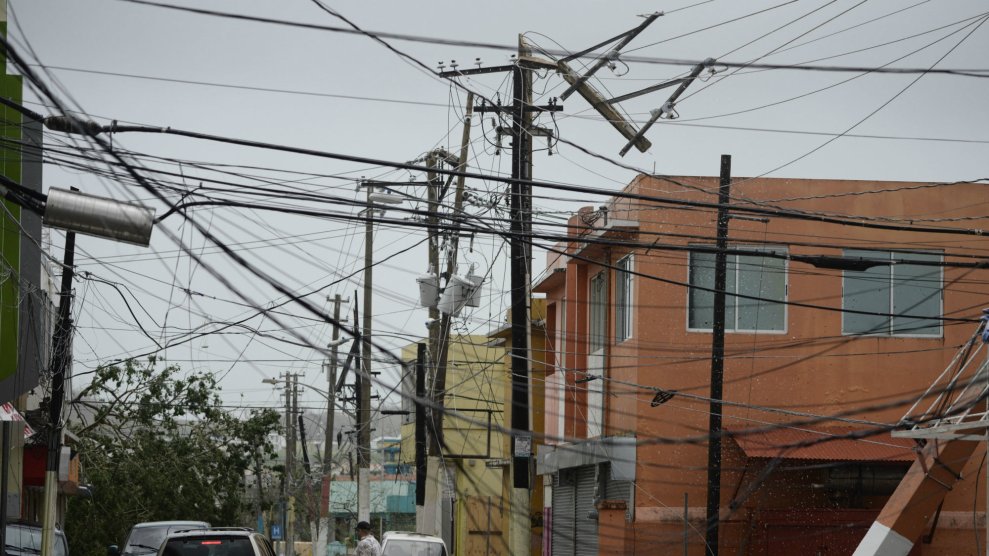 Puerto Rico barely had a minute to recover from being grazed by Hurricane Irma when Maria approached the island. Maria was one of the strongest and most powerful storms ever recorded in the Caribbean; her eye spanned the entire Puerto Rican territory.

With wind gusts of 150 mph, the storm left massive flooding across Puerto Rico. The island lost its entire electricity supply. On Friday, Ricardo Ramos, the CEO of PREPA, the island’s utility provider, told CNBC that the company had lost more than three-quarters of its infrastructure to the storm. (The utility was struggling long before Maria made landfall: PREPA filed for bankruptcy in July.) San Juan’s mayor, Carmen Yulín Cruz, recently confirmed that the whole island could be without power for up to 6 months.

Puerto Rico is still in a state of acute emergency: Residents are trapped in sweltering high-rise buildings; hospitals cannot safely store medicines that need to be kept cold; 70,000 residents in the northwest of the island have been ordered to evacuate because the Guajataca Dam is on the verge of collapse, threatening to unleash more flooding, Reuters reports. Nearly all cell phone towers are still out of commission, CNN noted. “Essentially only the metropolitan area has infrastructures,” Governor Ricardo Rosselló told CNN on Monday.

Once the more immediate crisis has been alleviated, Puerto Rico will stare down the daunting task of rebuilding, and reimagining what cities’ defenses should look like. And that should be an opportunity for a complete reimagining of Puerto Rico’s energy system, which uses some of the least sustainable fuels at some of the highest costs in the U.S., says Otis Rolley, the 100 Resilient Cities regional director for North America. Rolley says this rebuilding period could be a chance to holistically rethink Puerto Rico’s resiliency infrastructure, taking a cue from some of the lessons learned (or bungled) in New York and New Orleans after Hurricanes Sandy and Katrina.

After those respective storms, Rolley says, the cities “changed their zoning codes, their construction codes, and even how they connected individuals with each other in terms of strengthening social cohesion.” Following disasters, he adds, “both a physical infrastructure and a human one helps them to reduce the loss of lives, and decrease recovery time.”

Even before this most recent storm, Puerto Rico’s energy infrastructure was precarious. “It was already unsustainable; it was a terrible mess,” says Judith Enck, the former EPA administrator for Region 2, which includes Puerto Rico and the U.S. Virgin Islands. “Even if you had a modest wind storm, people would typically lose power for days at a time.”

Enck identifies dual culprits: power plants that required fossil fuels, and “rickety old transmissions.” Puerto Rico’s existing energy infrastructure relied primarily on oil or coal. And despite unreliable and unsustainable power sources, she adds, residents were paying some of the highest utility rates in the country.

It’s clear that, in order to rebuild, Puerto Rico will require a massive infusion of money. President Donald Trump last week signed off on a disaster declaration, opening the door for Congress to approve a disaster relief package. Future funding would follow close on the heels of the $15 billion that Congress allocated in the aftermath of Hurricanes Harvey and Irma—just a fraction of the overall rebuilding costs, which are still coming into view. On Monday, House Speaker Paul Ryan said that Congress “is working with the administration to ensure necessary resources get to the U.S. territory.” He added: “Our fellow citizens in Puerto Rico remain in our prayers as we make sure they have what they need.” Still, there’s no set timeline for when similar relief funding could be earmarked for Puerto Rico.

When it is, freeing up the money won’t be enough, Enck adds: She’s calling on Congress to issue a supplemental budget bill that gives Puerto Rico room to harden its grid. That’s key because FEMA typically only permits disaster relief funding to go toward rebuilding what was damaged, Enck says—not to rethink it from the ground up.

With infrastructure that was already vulnerable, “it’s absolutely imperative that FEMA not fund rebuilding an inadequate system,” Enck says. Improving the island’s grid, she adds, would entail “massive new investments in wind, solar, geothermal, and other clean energy sources.” Puerto Rico’s year-round sun makes solar an appealing option, Enck adds. As a model for adaptive resiliency, she points to Hawaii, where utility providers have outlined a blueprint for moving toward a grid backed solely by green energy.

Relying on a single power plant prone to flooding is an unsustainable model, says Rolley. He offers microgrids as one solution: “When a part of the infrastructure goes down, the other ones keep working.” Florida Representative Darren Soto, a Democrat of Puerto Rican descent, told the Miami Herald that concrete electric poles and sunken power lines could help Puerto Rico curb costs of recovering from future storms. Across the grid, the goal, Enck says, should be to “rebuild in a fundamentally different way, so that the source is cleaner and the distribution is more reliable.”

“Regardless of what work you do ahead of time, no one can be completely ready for a Category 5 hurricane,” Rolley says. But a more resilient grid could help the region be far more prepared to weather one.