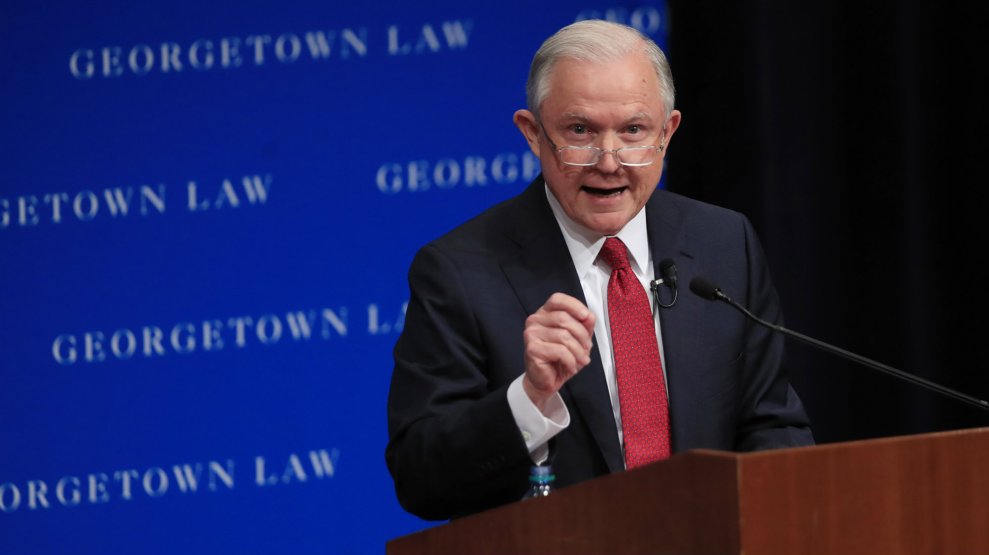 In a Tuesday speech at Georgetown University, Attorney General Jeff Sessions outlined the Justice Department’s plan to monitor and police speech issues on campus. “We will enforce federal law, defend free speech, and protect students’ free expression from whatever end of the political spectrum it may come,” he said.

During his speech, which drew protests from students and faculty, the department announced it had filed a statement of interest in a case involving a Georgia student who was allegedly told he could only distribute fliers promoting his Christian faith in designated free speech zones and with advance permission.

The address comes after several high profile protests of conservative or alt-right speakers aggrieved conservative activists and became national flash points. Sessions lamented that institutions of higher education are “transforming into an echo chamber of political correctness and homogenous thought, a shelter for fragile egos,” calling on university administrators to “stand up against those who would silence free expression.” Sessions also asserted that universities cancelling speeches over potential violence or controversy have created “a cottage industry of protestors who have quickly learned that school administrators will capitulate to their demands.”

He lauded America’s free speech values, and noted the many nations without such strong protections. “In these places, openly criticizing the government or expressing unorthodox opinions could land you in jail,” Sessions said.

A group of at least thirty academics at Georgetown University’s Law Center issued a public letter protesting Session’s appearance, highlighting the Justice Department’s current pursuit of a woman who laughed during Sessions’ confirmation. (The incident happened after another senator asserted the attorney general had a record of “treating all Americans equally under the law.”)

The letter pointed to that prosecution and other administration actions to “condemn the hypocrisy of Attorney General Sessions speaking about free speech.”

“Sessions is a key cabinet member in an administration headed by a President who spent last weekend denouncing athletes engaging in free expression and calling for them to be fired,” the signatories added. Outside of the speech, the protesters mimicked the athletes’ protest by kneeling on the ground.

Faculty and students protest and #TakesAKnee outside Georgetown Law, where Jeff Sessions is to talk about free speech on campus. pic.twitter.com/E8QDw7zxc7

The letter also pointed to the Justice Department’s warrant seeking records of visitors to a widely-viewed website that helped organize protesters on Inauguration Day. “This kind of government chilling of speech is precisely what the First Amendment to the United States Constitution is meant to prevent,” the letter reads. “A man who fails to recognize paradigmatic violations of the First Amendment is a poor choice to speak about free speech on campuses.”