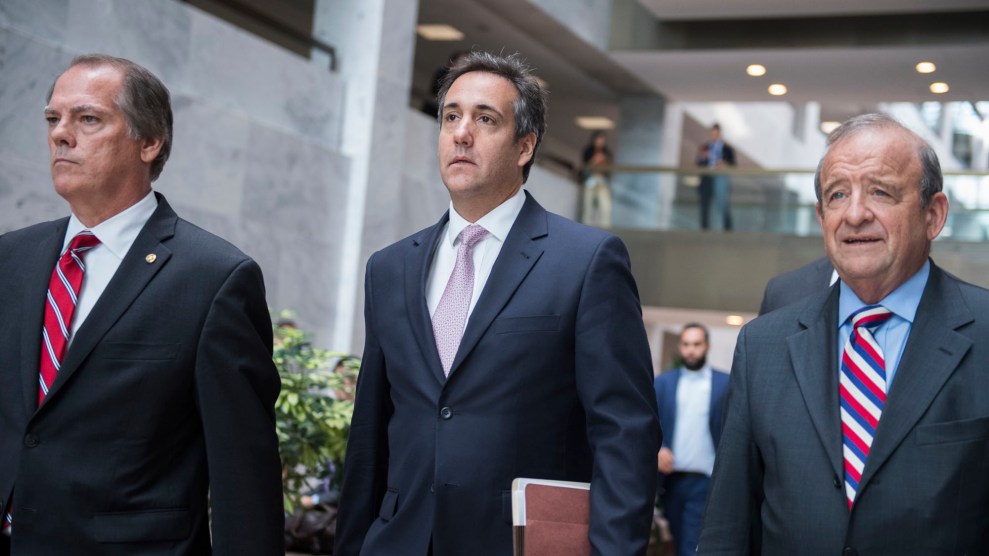 Michael Cohen, center, a personal attorney for President Trump, after his meeting with the Senate intelligence committee was postponedTom Williams/CQ Roll Call via AP

President Donald Trump’s longtime lawyer and defender, Michael Cohen, angered lawmakers from both parties on Tuesday by issuing a lengthy statement just before he was scheduled to be interviewed privately by Senate intelligence committee staffers in connection with the spiraling Russia scandal.

The committee’s top Republican and Democrat said that Cohen, by issuing his missive, ignored their demand that he avoid public statements. The senators reacted by postponing the private meeting and vowing to force Cohen to appear at a public session. Cohen’s statement also raised several important questions.

“The Committee expects witnesses in this investigation to work in good faith with the Senate.”

In the statement, Cohen denied that he or Trump had colluded with Russia to influence the presidential election. But notably, he did not include in that denial other Trump associates involved in the controversy, including Donald Trump Jr., former campaign chief Paul Manafort, Trump son-in-law Jared Kushner, and former National Security Adviser Michael Flynn.

“I’m certain that the evidence at the conclusion of this investigation will reinforce the fact that there was no collusion between Russia, President Trump or me,” Cohen said.  Citing his proximity to Trump, Cohen said he “never saw anything—not a hint of anything—that demonstrated [Trump’s] involvement in Russian interference in our election or any form of Russian collusion.” He did not mention the June 9, 2016, meeting, in which Trump Jr., Manafort, and Kushner met with a Russian emissary who, they were told, was going to share with them Russian government dirt on Hillary Clinton.

Cohen’s lawyer, Steven Ryan, said Cohen issued the statement because the timing of the interview leaked to the press. But committee chairman Richard Burr (R-N.C.) and Mark Warner (Va.), the panel’s top Democrat, blasted the move in their own statement.

“We are disappointed that Mr. Cohen decided to pre-empt today’s interview by releasing a public statement prior to his engagement with Committee staff, in spite of the Committee’s requests that he refrain from public comment,” they said. “As a result, we declined to move forward with today’s interview and will reschedule Mr. Cohen’s appearance before the Committee in open session at a date in the near future. The Committee expects witnesses in this investigation to work in good faith with the Senate.”

Warner told Mother Jones that the committee generally instructs witnesses to avoid public statements, which he argued could interfere with the panel’s ability to question those witnesses.

Ryan said later Tuesday that Cohen agreed to the committee’s request that he appear at a public hearing on October 25.

A public hearing is bad news for Cohen. The panel had previously agreed to let him to appear behind closed doors. Ryan told reporters Tuesday that Cohen was willing to participate in a rescheduled “voluntary interview,” but he would not say if his client would agree to show up at a public hearing.

In addition to riling the committee, Cohen’s statement may raise new questions for the investigators.

The Russian Federation, commonly called Russia, consists of 85 republics and regions. It was not clear if Cohen’s reference to “members” referred to those Russian entities. Cohen may have meant that he had not engaged with Russian officials or citizens to influence the election. Ryan did not respond to a request for clarification.

In the statement, Cohen demanded that the intelligence committee issue “a public conclusion about the truth or falsity of the allegations” contained in the so-called Steele dossier, and then he devoted nine paragraphs to disputing those allegations. That document, whose existence Mother Jones first reported and which was later published by Buzzfeed, contained allegations regarding Cohen’s contacts with Russia that Cohen has insisted are false.

Cohen’s statement, though, did not challenge more recent disclosures about his ties to Russia. News broke last month that Cohen had secretly worked during Trump’s presidential campaign to help Trump close a potentially lucrative deal to develop a Trump Tower in Moscow. That effort included Cohen seeking help from Russian President Vladimir Putin for the venture, which would not have been able proceed without Russian government permission. (There are no signs Putin’s office responded to Cohen’s request for assistance; the deal ultimately fell through.) And early this year, Cohen, who is married to woman born in Ukraine, helped convey to the Trump White House a pro-Russian peace plan for Ukraine that would have rolled back sanctions on Russia.

In the statement, Cohen did not mention the peace plan. He did describe the Moscow tower project  as “solely a real estate deal” that was called off before presidential primaries began. He did not address the fact that Trump did not publicly disclose his Moscow venture while he was running for president. Nor did Cohen directly address emails from a Trump associate that indicated the Moscow proposal was related to Trump’s presidential campaign.

Cohen also offered an admonition: “If we really are concerned about a Russian attempt to divide our country and discredit our political system then the best thing we can do is put aside our infighting, stop presuming guilt rather than innocence of American citizens, and address this national security threat as a united people at its source.”

These words are notable, for Trump has repeatedly derided reports of Russian interference in the 2016 campaign as a hoax. Trump has failed to criticize or punish Russia for mounting this clandestine assault on American democracy. But now Trump’s longtime lawyer and a man who has said who would take a bullet for Trump was acknowledging that Putin’s meddling in the election is a threat to the country that must be addressed. Perhaps he should offer that advice to his client.