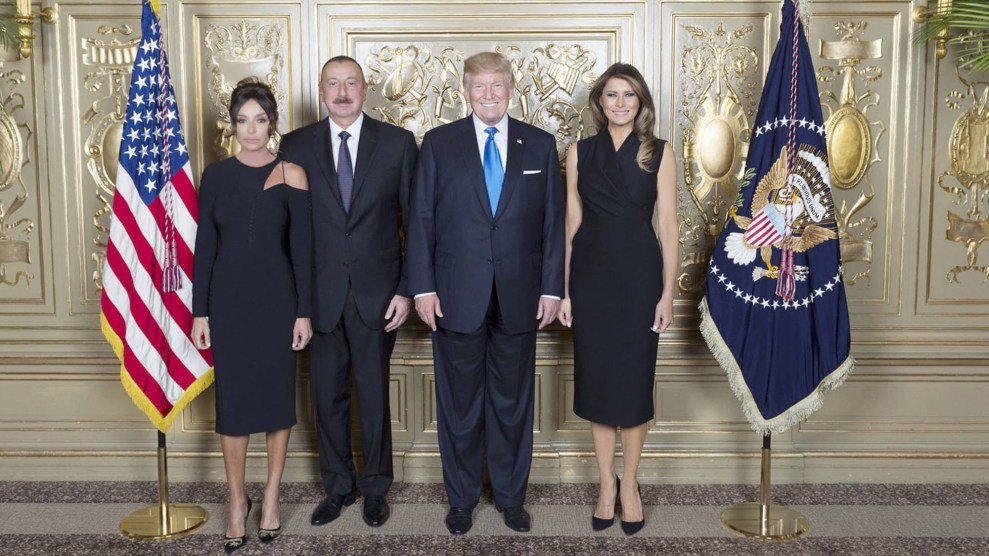 The Embassy of Azerbaijan is touting a meeting last week between the country’s president, Ilham Aliyev, and President Donald Trump. In fact, while Aliyev may have merely posed for a photograph with the president and their wives while attending a reception Trump hosted at the outset of the UN’s General Assembly, the photo is valuable for Aliyev—and awkward for Trump.

It’s not just that Aliyev is jailing journalists while deflecting accusations of vote-rigging, kleptocracy, and international bribery. (Leaders who do that sort of thing don’t seem to faze Trump.) It’s also that Aliyev himself has multiple connections to Trump’s own scandals.

Aliyev’s daughter, Leyla Aliyeva, who posted a picture of the presidents on her Instagram account shortly before drawing mockery for making faces and taking selfies while her father delivered a speech on genocide, is the ex-wife of Emin Agalarov, the pop singer son of Aras Agalarov, a billionaire Russian real estate magnate.

Trump partnered with the Agalarovs on the 2013 Miss Universe contest near Moscow and on a deal to build a Trump tower in Moscow, one of Trump’s failed bids to launch a project in the Russian capital. After Aras Agalarov met last year with Yury Chaika, the prosecutor general of Russia, the Agalorovs arranged a now infamous June 2016 Trump Tower meeting with a promise to deliver information damaging to Hillary Clinton. Rob Goldstone, Emin’s agent, said in an email to Donald Trump Jr. that the information formed “part of Russia and its government’s support for Mr. Trump.”

Trump has another tie to Aliyev’s regime. As Mother Jones reported in 2015, the Trump Organization partnered in 2012 on a Trump Tower in Baku, Azerbaijan’s capital, with the son of Aliyev’s ally, Ziya Mammadov. Then Azerbajian’s transportation minister, he was described in a leaked State Department cable as “notoriously corrupt even for Azerbaijan.” The tower was never finished, but it took shape partly on land controlled by the country’s transportation ministry, far from the city’s other hotels. Trump, who cut his company’s ties to the project after his election, never held an ownership stake in the tower. But he disclosed earning up to $2.8 million for licensing his name on it. The New Yorker reported this year that Mammadov awarded contracts to a group closely linked to the Iranian Revolutionary Guard Corps, and that evidence “strongly suggests” Mammadov has profited by helping the guard, which the United States has considered naming a terrorist organization, launder money through various Azerbaijani construction projects.

Trump’s involvement in the deal has drawn scrutiny from Congress, and special counsel Robert Mueller is reportedly investigating Trump’s real estate deals, likely including the Azerbaijani project. The Foreign Corrupt Practices Act requires American companies to conduct due diligence to ensure foreign business partners have not engaged in corruption. Alan Garten, a lawyer for the Trump Organization, claims it did, but he declined to release results of its examinations of Mammadov and its other partners to The New Yorker or to other reporters. While Trump may not have known of malfeasance on the project, US courts have criminalized “conscious avoidance,” in which investors purposely remain in the dark about corrupt practices by foreign partners. Garten has also argued the organization could not have violated the Foreign Corrupt Practices Act because Trump did not own the tower. Lawyers familiar with the law dispute that contention.

Corruption is widespread in Aliyev’s Azerbaijan. This month, the Organized Crime and Corruption Reporting Project and its European media partners reported a scheme in which $2.9 billion was allegedly steered from companies linked to Aliyev, state ministries, and the country’s largest bank, and laundered and used in part to bribe European politicians and journalists to lay off criticism of Aliyev.

Human Rights Watch warns that in recent years Aliyev’s government has “escalated repression against its critics, marking a dramatic deterioration in an already poor rights record.” That includes blocking access to independent media sites. On August 24, Azerbaijani police arrested Mehman Aliyev (no relation to the president), the editor-in-chief of the news agency Turan, which many observers describe as the country’s only remaining independent media outlet. “We urge the government of Azerbaijan to immediately release Mehman Aliyev, and all those incarcerated for exercising their fundamental freedoms,” the State Department said in an August 26 statement.

In the face of international criticism, Azerbaijan has been boasting of a rapprochement with the United States following Trump’s election. This year, Azerbaijan’s embassy hired two lobbying firms: the Podesta Group, with Democratic ties, and BGR Government Affairs, staffed mostly by Republicans. Both firms offer the country advice on US relations and do public relations work. Azerbajian, which has long employed lobbyists through state-run firms and varied organizations promoting trade ties with the United States, may still be hiring. Last week, Politico reported that Corey Lewandowski, Trump’s former campaign manager, had promised Azerbaijian’s ambassador he could get Aliyev a meeting with Trump. Lewandowski denied making the offer, the latest of several reported efforts he has made trading on perceived access to Trump.

A meeting with Trump, or even a simple picture, clearly has value for Aliyev. “The Azerbaijani government, like others in the region, will take any opportunity they can to boost their international image through things like photo ops, especially when they’re being scrutinized for their poor human rights records,” said Rachel Denber, deputy director of the Europe and Central Asia division at Human Rights Watch.

The White House did not respond to questions about Trump and Aliyev’s interaction. Vugar Gurbanov, a counselor at the Azerbaijani Embassy, issued a statement saying the presidents conversed at the reception, but provided no specifics. “The presidents enjoyed a conversation,” Gurbanov says. “Azerbaijan has developed a very strong and resilient relationship with the United States and we appreciate our strategic partnership with the American side.”