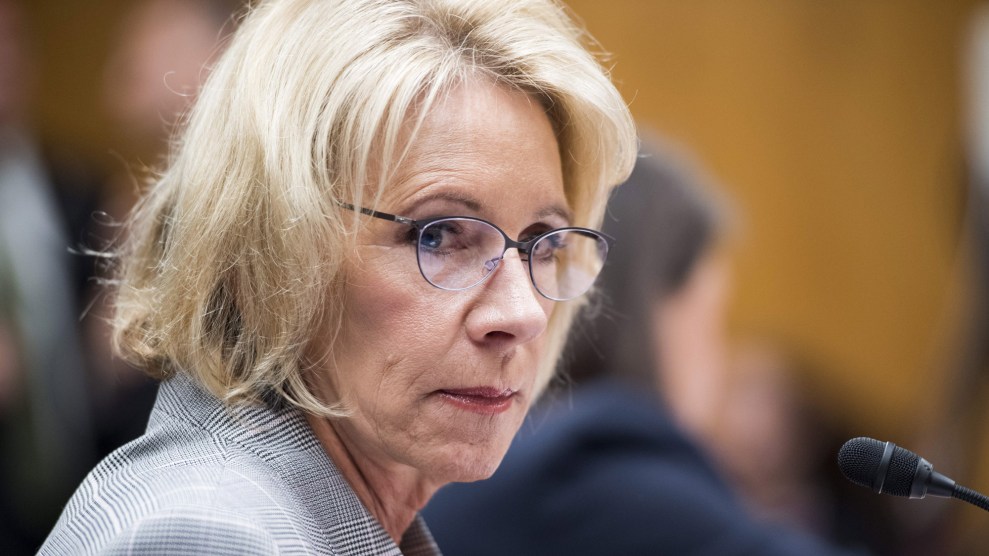 On Thursday night, at a conference on the future of school choice at Harvard University, Education Secretary Betsy DeVos continued to make friends. As she has at a slew of recent events, the cabinet member was met by a scrum of mostly silent protesters, some of whom carried signs bearing the words “Education Justice is Racial Justice” and “White Supremacist.”

And that got started even before DeVos made her arguments (yet again) in favor of giving families options in what schools they send their children to. This time her talking points were different, though; in an intriguing bit of wordplay, school choice, she said, could be thought of in the way we think about what to eat for dinner:

Near the Department of Education, there aren’t many restaurants. But you know what—food trucks started lining the streets to provide options. Some are better than others, and some are even local restaurants that have added food trucks to their businesses to better meet customer’s needs. Now, if you visit one of those food trucks instead of a restaurant, do you hate restaurants? Or are you trying to put grocery stores out of business? No. You are simply making the right choice for you based on your individual needs at that time. Just as in how you eat, education is not a binary choice. Being for equal access and opportunity—being for choice—is not being against anything.

DeVos at Harvard: School choice like choosing a food truck. "You are simply making the right choice for you based on your individual needs." pic.twitter.com/VG9DGZjUUE

More than a dozen protesters were at the event, holding signs and raising fists. A separate protest gathered outside the venue. Some called for protections for sexual assault survivors, less than a week after the Education Department rescinded Obama-era directives for how schools should adjudicate sexual assaults on campuses. Others warned of a loss of funding for public schools as a result of the promotion of charters. Before the speech on Thursday, the Education Department announced it would dole out $253 million in grants to fund “the creation and expansion of public charter schools across the nation.” When DeVos began to leave the event, the crowd began chanting, “This is what white supremacy looks like.”

"WHAT DOES WHITE SUPREMACY LOOKS LIKE?" Students pointing at @BetsyDeVosED as she exits. pic.twitter.com/oFQTHLne41

Another notable moment of the evening came when a student asked DeVos, a billionaire, how much she expected her net worth to increase as a result of her policy decisions, given that, the student said, corporate interests made money off the school choice movement. “I have written lots of checks to support giving parents and kids options to choose a school of their choice,” DeVos said. “The balance on my income has gone very much the other way and will continue to do so.”

Under President Donald Trump’s budget proposals from earlier this year, the Education Department would see a $9 billion cut to its overall budget but would have $1.4 billion set aside to support expanding charters and vouchers for private schools. While it’s unlikely Congress will approve such a budget, and a rumored federal tax-credit scholarship program failed to materialize when the White House and Congressional Republicans introduced its tax plan this week, DeVos insisted Thursday night that there was still hope for such a program.

The two-day conference at Harvard’s Kennedy School of Government, which featured some school-choice friendly scholars, was, as Chalkbeat’s Matt Barnum pointed out, sponsored in part by the Charles Koch Foundation. (The event’s webpage initially claimed as much, but the reference to the Koch’s was later scrubbed from the site.)

Betsy DeVos will speak at a Harvard school choice conference (cosponsored by EdChoice and the Koch Foundation) https://t.co/0rmxAPMjMa pic.twitter.com/8aFB4wqKO0

Watch the full speech below: