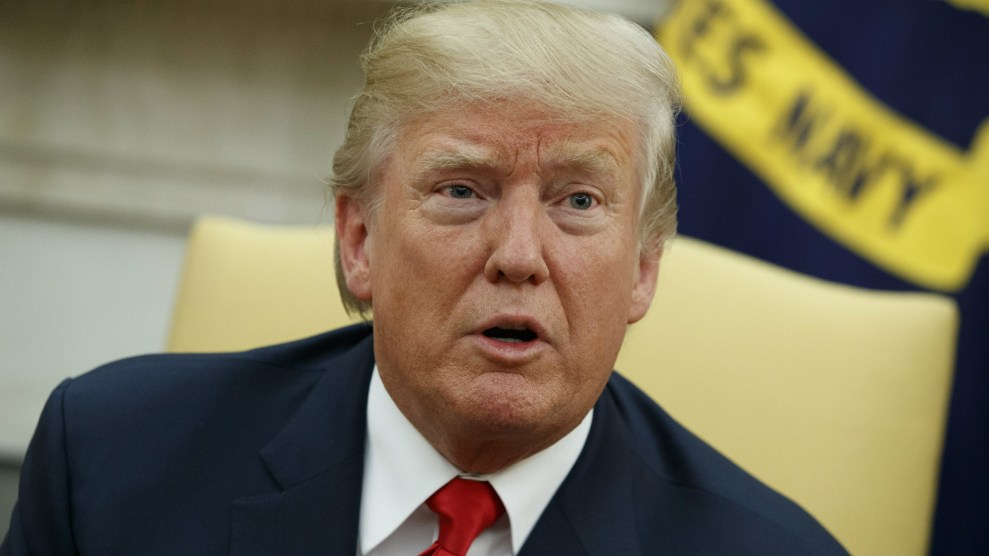 Shortly before taking office in January, Donald Trump tweeted that he had no business deals involving Russia. That may have been technically true at the moment, but it wasn’t for lack of trying. His decades-long record of attempting (and failing) to launch big real estate deals in Moscow was already in the public record. Yet new revelations Monday showed that when he was running for president in 2015, Trump signed an agreement to develop a Trump Tower in Moscow. And Trump’s partner in this project was a Russian development company that apparently previously obtained financing from Sberbank, a state-owned Russian bank hit with sanctions from the United States and the European Union due to Russia’s annexation of Crimea. This Trump project, though, fell through before any Russian financing was obtained.

According to a Washington Post report, Trump signed a letter of intent on October 28, 2015—the same day he participated in a key GOP primary debate—with a Russian firm called IC Expert Investment Company to develop a Trump-branded tower in Moscow. Information on the company is sparse, but a website that appears to be for the company describes it as a developer of an apartment complex in a suburb of Moscow called Reutov. The website lists the company’s development and banking partners, including Sberbank, a Russia banking goliath. A website that appears to be the official site for the apartment complex, Novoskino-2, notes that Sberbank and Otkritie Bank, a privately-owned Russian bank, provided financing for the project. The apparent IC Expert site also states that another one of its strategic banking partners is Gazprombank, one of the biggest banks in Russia. It owns Gazprom Media, the largest media holding company in Russia.

Neither IC Expert nor Sberbank responded to a request for comment.

Sberbank, one of the largest banks in all of Europe and a prominent commercial lender in Russia, is majority-owned by the Central Bank of the Russian government. Following the Russian invasion of Crimea in 2014, Sberbank was placed on sanctions lists by both the United States and the European Union—as was Gazprombank.

The previous year, Sberbank was a co-sponsor of the Miss Universe contest—then co-owned by Trump—when the pageant was held in Moscow, and the bank’s chairman, Herman Gref, attended a Moscow luncheon for Trump. The Miss Universe event led Trump and Aras Agalarov, a Russian oligarch developer who had teamed up with Trump to host the Miss Universe show in Russia, to start work in late 2013 on a Moscow Trump Tower deal. At the time, Sberbank provided Agalarov’s Crocus Group about $1.6 billion in financing for several real estate projects, including the potential Trump Tower. So Trump nearly ended up in a huge deal with Sberbank—shortly before it was placed on the sanctions list. But that project fizzled out—perhaps partly due to the sanctions.

This week, the Washington Post reported that after Trump signed the letter of intent with IC Expert in 2015, work began on recruiting an architect and lining up financing. The middle-man for the deal was a controversial figure named Felix Sater, who had previously worked with Trump in the 2000s and who had been convicted prior to that for being part of a stock market swindle involving the Mafia and Russian organized crime. (Sater also once did time for slashing a man’s face with a broken margarita glass.) At one point Trump’s personal attorney, Michael Cohen, emailed Russian President Vladimir Putin’s office looking for assistance with the Trump Tower deal. In a statement prepared for the House intelligence committee, Cohen noted he never received a reply. He also said that Trump eventually lost confidence in his Russian partner’s ability to acquire the land and obtain approval to build the project. The project, according to Cohen, ended in Janaury 2016, shortly before Trump began winning GOP primary contests on his way to seizing the Republican presidential nomination.